These are the mamas of your neighborhood…

*WARNING: mind-bogglingly long post ahead. Pace yourself. Or, just scroll through and admire loverly but entirely gratuitous baby photos before you reach The Mother of All Group Hugs List O’ Links at the end of this post.
**New links posted! New! New!

Many years ago, in a land far, far away, long before and miles away from my days of doctoring philosophy and wiping the intellectual noses of snotty undergraduates, I was a snotty undergraduate myself. Brash and idealistic and prone to drunken speeches in which I would sloppily quote Rousseau (we must be forced to be free!) or Nietzsche (our duty is wakefulness!) and then fall off of whatever chair or table I was standing on and weep for mankind’s descent into slavish, sheep-like droneness. Newspaper readers! All of us! Heading into twilight!

(I still do this occasionally. For fun.) 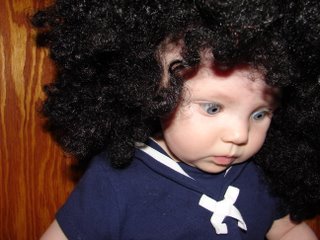 I was the world’s youngest misanthrope. Humanity I love you because you are forever putting the secret of life in your pants and sitting down on it… Humanity I hate you.

I was pretty irritating. I still can be.

My misanthropy received an unexpected and unfortunate boost in the late nineties when, to supplement my fellowship income, I began working as a researcher for a ‘Centre for Dialogue’ that my university was building. My task? To research ‘virtual communities’ – online networks of people with shared interests and/or concerns – in order to establish whether such communities provided examples of ‘effective dialogue,’ such that they could be said to make a difference in the on-the-ground lives of real people and real communities. I very quickly discovered that most such communities were riddled with conflict, riven by power struggles and politics. It was not pretty. I was not surprised.

Community, bah. It seemed clear to me that the old philosophers had it right: it’s not in our nature to get along, to meld easily into communities and love our fellow citizens and neighbors as friends. We’re all too self-interested, self-absorbed, bourgeois. We ignore each other, disdain each other, hurt each other. There are and always have been lights in the human darkness – lights that we seize upon and celebrate – but I had a difficult time escaping the suspicion – the seeming fact – that human beings kinda suck, collectively. Subsequent years spent studying and teaching political philosophy did little to dispel that suspicion.

So if you’d told me, even last year, that I would stumble upon a community – a virtual community, mind – that would seduce me so completely with its warmth and generosity and humor and intelligence and powerfully cooperative spirit, I probably would have scoffed. (And if I’d had a few martinis, I would have said something Nietzschean about the unbending of the bow of Western Civilization, shuffled over to the stereo to put Frankie Goes To Hollywood on repeat and then passed out.) 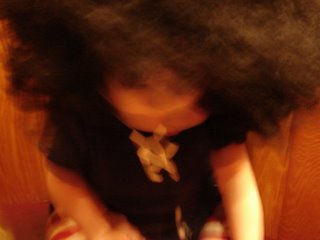 WonderBaby in Martini Fog (if HBM still drank martinis, which she does not, because she has been rendered weak, weak, in this and certain other respects, by motherhood.)

This little community of ours, it is not without its controversies and conflicts. But for every conflict that I’ve seen, I’ve also seen a heart-swelling demonstration of humanity. Those ripples and waves in the placid calm of our virtual waters stir us, move us, sometimes threaten to swamp. Sometimes we splash too hard. We get water in our eyes. But we always find the surface, the shared surface, and bob above it, shaking our wet heads and spluttering and smiling and making sure that nobody stays under. We’re all here. We’re all wet. We are each others’ water wings.

We talk, we debate, we judge, we support, we argue, we love. We are different. But we are mothers and fathers (and some, according to more than one ode, are both. Dutch? Apparently you’re a Drag Mom) and parents and friends and we get that the plural of those nouns matters. That’s what we share, beyond our deep love for our children: the conviction that it matters that we have each other, if only in lines of code. That we have a community. That, like motherhood, like parenthood, community is not always easy, but that its rewards are life-changing, life-preserving. That it’s worth standing up for.

This week has, in certain respects, been one of the best of my life. The outpouring of support for such a simple idea, the embrace of the embrace, has caused my misanthrope’s heart to grow two whole sizes (which, when put together with the heart-swelling effects of becoming a mother, puts that heart at size Extra-Queen. Requiring control-top reinforced-crotch jumbo heart-hose.) I’ve been thrilled by the response, overwhelmed by the response, moved by the response. I’ve read every post for which a link was sent, and commented on many of them (if I didn’t comment on yours, it’s because I visited while WonderBaby was clamped to boob or while I was in an insomniac daze.) I’ve laughed and cried and sighed and been struck dumb as my heart clenched in my chest. And then laughed again. The power of love, baby. It’s heady shit.

At time of writing, I have nearly a full half-dozen pages in a Word document devoted to the links that you’ve been sending. I stopped counting them when they hit fifty. And there are more coming. I had planned to write a little blurb about each link, and include quotes from the various posts, but the document in which I’ve been recording those links keeps growing at such a pace that blurbing each link would require dozens of posts.

So it’s also been a challenging week. Worrying over identifying all of the posts (have I found them all?). Fussing over accurate record-keeping (have I recorded them all?). Fretting over how to do each one justice (how do I give due to them all?). Every single post deserves its time in the spotlight, deserves ample and careful treatment. (Bunmaster’s genius riff on Pablo Neruda? Mo-Wo’s Eclectic Kool-Aid Acid Test? Sherry’s poetic invective against blogtards? Bite My Cookie’s ode to the literary brilliance of GGC? Kristen’s heart-wrenching reminder that a mommy blogger is also the woman who lives motherhood as a deeply felt wish, and that sometimes those wishes die? Every last one of the posts that I received?) I can’t do this in one post. I can’t even figure out how to get all of the links into the above paragraphs. I’ve been strobing for the last two days trying to figure out how to do it. But I can’t.

So I won’t. Today, in this, the Great Mommy Blogger Love-In CardPost, I will list each and every post that I have received to date, and some that I know are forthcoming. (If, for some reason, I have missed you, accept my sincerest apologies and then e-mail me immediately and I’ll edit in your link. If you know of any mama-bloggin’-love posts or posts of this ilk, send me those links, too. And if you do a post after-the-fact – great! – send me the link and it’ll be included. No deadline, no limits, on love!)

And then, from now on, on every Friday, I will do a post that highlights a few of these posts, with blurbs and quotes and links aplenty. And I will do this until I’ve worked my way through them all, and until the links stop coming. It will be Her Bad Mother’s Neighborhood, where everybody is special. And everybody will get their day in the blogger sun.

(And I will never again sit in front of my laptop in my ratty cardy on a Friday, brain fried by a week of endless nursing and Jolly Jumping and mom-cruising and song-singing and sleep-coaxing and general baby wrangling, stumped for what to write. Huzzah!)

But today, you all go down in history as part of the Biggest Mommy Blogger Hug Ever. Read, and be proud. 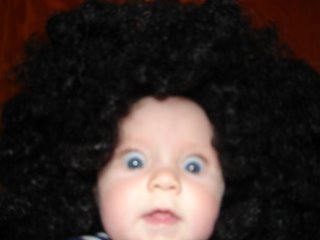 We Are Family (I Got All My Bloggers With Me)

Amalah @ Mom’s Daily Dose NEW!
http://blogs.clubmom.com/daily_dose/2006/05/things_to_do_in.html
(Not an original submission but a shout-out to this list so it totally counts. And, dudes. Amalah.)

Knocked Up Then Knocked Down
http://knockedupthenknockeddown.blogspot.com/

Mommy Does it All (Kristen)
http://mommydoesitall.blogspot.com/2006/05/girl-crushes.html

Mommy Off the Record
http://mommyofftherecord.blogspot.com/2006/05/spreading-little-love.html

Mommy Off The Record
http://mommyofftherecord.blogspot.com/2006/05/spreading-little-love.html

My Mom Told Me Not To Blog (MM – Mom of Monsters)
http://toldnottoblog.blogspot.com/2006/05/mothers.html

Not Winning Mother of the Year (Sharpie)
http://notwinningmotheroftheyear.blogspot.com/2006/05/funny-thing-happened-on-way-to-my-blog.html

One Girl and her Cats (Alice)
http://onegirlandhercats.blogspot.com/2006/05/ooh-i-just-cant-resist-this.html

The State of Discontent NEW!
http://jaelithej.blogspot.com/2006/05/week-late-and-several-marbles-short.html