In The Forest (Post Script) and other random crap

by Catherine
Uncategorized
Share
Because there is, always, more to say… And because I needed to take on those rumours that my last post totally stole from the inspirational writings of Britney Spears. Read on… (reflections on Britney’s treatment of William Blake, and really cool BlogHer stuff, follow further musings on religion. Because, you know, God comes first!)

In reading all of your wonderful comments – thank you thank you a million times over – on my Gotta Have Faith post (which is what I would have called it if I hadn’t been going for that heavy, pedantic vibe that only references to writers like William Blake can provide), it occured to me that I hadn’t really spelled out why, exactly, I felt it important to expose my children to religion and faith. That Santa/Tinkerbell analogy was handy, but it didn’t really stand as an argument for religion or for faith in general. Do we expose our children to faith simply for the sake of faith? Because it’s nice to believe in something, if only in our youth?

I made it clear that my wishes for my children with regards to spirituality were not grounded in a belief that spirituality/religion/faith would make them (morally) better people or get them into heaven. I don’t believe that one needs religion to be good, morally or otherwise (indeed, I think that religion can get in the way of goodness.) And, heaven has bouncers? Whatever.

So, whaddup with my determination to expose my children to religion? I said that I wanted them to have meaningful choice in the matter of whether or not to be faithful, and that I believed that to provide them with such choice required, requires, introducing them to religion and inviting them to take it seriously. This does not, I should be clear, require beating them over the head with pieties and responding to their questions with faith-based answers. (It’s raining, sweetie, because God is crying. God is crying because you spilled your milk, and because David Hasselhoff is on television. We must pray to make it stop.) I also want my children to have the choice, one day, to reject religion for themselves, and to be critical of organized religion. A difficult line to walk, but one that I feel I must walk.

But, again, why? Beyond the simple matter of choice? Yes, and for the very reasons that I feel strongly about such choice. I feel, strongly, that they must know religion if their future rejection of religion is to be really meaningful. Which is to say, I think that in order to be really critical of a thing, of a set of ideas, of a belief, you have to have some experience or knowledge of the thing that you are criticizing. Socrates, after all, knew his Homer, and knew it well. I want their criticism, when it comes (and I very much want it to come), to be informed, and not the result of some sort of acquired reflexive secularism. The kind of reflexive secularism that simply assumes that faith is stupid, or misguided, simply because it is faith. I want them to taste faith, to feel it on the tongues of their souls, before they decide that it disagrees with them.

And I want them to know, directly and intimately, why it disagrees with them so that they will know, really know, that such disagreement is always personal. So that their disagreements with religion or with God can be their own, and not my disagreements, or somebody else’s disagreements, or society’s disagreements. And I want this, again, because I want their critique of religion, when and if it comes (and I hope that it does come, on some level) to be well and personally informed. And, I want this because I always want them to respect the faith of others. I want them to have some sense of why it is that people embrace faith, even if – especially if – they come to reject faith in any of its forms. I never want to hear them dismiss another person, or another person’s ideas, simply on the basis that that person is Christian or Jewish or Muslim or Wiccan or whatever. I want them to only ever reject ideas on their own merit, and only after respectful consideration of those ideas.

(Yes, I am a beacon of selflessness and love. This is why Jesus loves me.)

But, full disclosure: I have my selfish reasons, too. That argument for honing my children’s critical faculties through exposure to religion has, it must be said, a bit of a competi-mommy edge to it. To know, well, the Judeo-Christian tradition (which also shares much with Islam) is, like it or not, to know the core of the history of Western (and some Eastern) culture. It is to know, better, the many threads that make up the tapestry of Western philosophy and art and literature. And I want my children to have this knowledge. I had, have, a tremendous advantage as a student and as an academic for knowing, and knowing well, the Bible. My understanding of philosophy, art and literature is much more extensive and nuanced than it would be without that knowledge. I know when a writer is making esoteric reference to a passage in the Old Testament, when a modern story is really a re-telling of a much older story, when arguments for war borrow from the Christian philosophical tradition (yes, there is one). I know why Nietzsche got his panties in a twist about Christianity. I knew, at a young age, that the stories of CS Lewis and Tolkien were far more theologically sound than those of George Lucas. I know and can explain why the Da Vinci Code communicates a sloppy theology (but, I must confess: I still enjoyed reading it.)

(OK, so those last two are not so special. But still.)
(I should note that I do not believe that the only route to such knowledge is through religious education, and especially not through any one particular religion. Far from it. Anybody with a good liberal education gains access to all of this. But a religious education – one that did, I should stress, allow ample room for questioning and critique – in childhood gave me a head start. And it provided me with personal reference for the more focussed study that came later.)

This whole speculative project goes, then, a little bit further than the joys of Santa and TinkerBell and that warm, secure feeling that comes from singing Jesus Loves Me. And is, perhaps, somewhat less pious than it might have initially seemed. But what did you expect? I’m Bad. 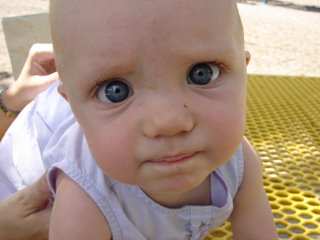 Save it, Ma. Christianity is Platonism for the people. I’ve decided to worship Bopis.

What, what, WTF, is up with the universe that both Britney Spears and I wrote about William Blake – the same work, no less – on the same day? Her post got more traffic, I’m sure, but I think that mine was better written. Still, you can’t beat her analysis of Blake: 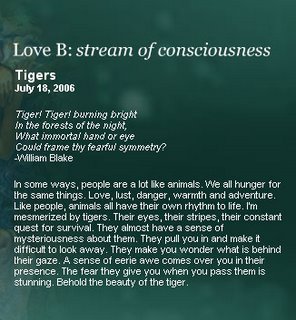 Then from the gloom came Britney Spears
And broke the poets down to tears
Did He smile His work to see?
Did He who made Will Blake make thee?

William Blake is currently up in Heaven smashing all of his Britney albums under the heel of his boot.

When not pondering the mysteries of the universe, I’ve been giving and receiving interviews. BlogMe interviews!

Devra at Parentopia interviewed me today, and I’m completing an interview for Izzy as we speak (well, after we speak). I’ll post my own interview of Devra, and my interview of the scrumptious Izzy as soon as I get Izzy’s material. Both interviews will be sizzling, I promise you.

In the meantime, you can see my interview questions here. Toronto-area mama-bloggers, I’ve tagged you with this interview thing; see details at Mama Blogs Toronto. Please participate, especially if you are not going to BlogHer: I want to gather together TO mom-blogger profiles before I go so that I can direct people to one virtual location to meet you all.

And anyone else who feels at all interviewy – I’d love to see your responses, too! Go, go – do it!