The Princess, The Cowboy and The Narrative of Footprints

When Princess Diana died, I was bothered by the fawning coverage of what seemed to me to be the excessive displays of public grief. This was at the tail end of my undergraduate years – I was working on my honour`s thesis, about the post-modern politics of community storytelling – and I was as pious a Marxist-feminist as you could hope to find, anywhere. The collective global wailing and rending of garments and tearing of hair was, I thought, an overwrought symptom of the cultural opiation of the masses. She was just one woman, I thought. Why did her death matter more than the death of any other human being? Why had the world gone into deep mourning for one woman – however kind, however pretty – when millions of people died every day? Wasn’t there so much greater tragedy in the world, more deserving of mourning?

I thought it all disturbing. Still, I watched the funeral on the television. One has to keep up with popular culture, you know. I was prepared to be outraged. Instead, I cried. Just for a moment – and it was just one moment that provoked the tears – but it was, for me, a revealing moment.

You know the moment that I’m talking about: Prince Harry, then just a little red-headed boy, fists clenched in grief, placed a card on his mother’s casket. The cameras zoomed in: the envelope read, simply, Mummy.

I no more identified with Diana that I identified with the middle-aged Italian cheese merchant down the street. But I knew Diana’s story, I was familiar with the story of her life, and with the story of her children’s lives, and so I could experience some visceral grief at the tragic turn that the story had taken. So it was that when I saw the image of little Harry’s attempt to reach out to his deceased mother, my gut was wrenched much more intensely than it was during any Foster Parents Program commercial.

A similar thing happened while I was reviewing (for my paid gigs, of course) the coverage of Heath Ledger’s recent death. I am, in my dotage, much more sympathetic to public grief over the deaths of celebrities than I was as a callow and ideological youth, but I still tend to remain detached from the collective gasping and hand-wringing. So while I was unsettled by the sudden and unexplained death of the actor, I wasn’t shedding a lot of tears.

Until, that is, I saw this: 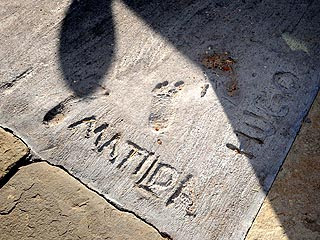 It’s a little family memorial that Heath made for his daughter, Matilda, who is two years old (only a month older than Wonderbaby). It’s her footprints, pressed into concrete, alongside her name, which Heath scrawled in the pavement outside their home in Brooklyn. It was a special secret between father and daughter, something that they created together, said a neighbour. There are now, apparently, bouquets of flowers, wrapped in plastic, piled upon the concrete over Matilda’s footprint. The memorial created by father for daughter is now, simply, a memorial for the father.

It made me cry because it reminded me, sharply – more than could any picture of Heath and Matilda together – that he was a dad who loved his daughter, and that Matilda is a daughter who has lost her dad, and that whatever future they had together – whatever adventures lay ahead of them, whatever sidewalks they might have lovingly defaced – is now gone. Whatever story was unfolding for them – a story that you and I only knew from a distance – has ended, tragically, and what remains is just that poor little girl and her loss.

Children lose parents every day, and – worse – parents lose children. But we don’t know most of their stories, and so those losses remain abstract, statistical, at a remove from our own stories. And that’s a shame – that we are so removed from each other’s stories, that the more distant those stories the less they are able to move us. And maybe it’s a shame that we are more likely to be moved by the story of a death of a celebrity than we are by the deaths of 54,000 Congolese every month – it is certainly a shame – but it is, for better or worse, understandable. Heath Ledger, and Princess Di, and Anna Nicole Smith and Britney Spears and all the other denizens of Celebrityland are much closer to us, or at least appear to be, because we follow their stories and compare our own against them. We trace the narratives of their lives and look for some traces of ourselves – as parents, as citizens, as dreamers – within those narratives. And so when those narratives, those stories, come to a sudden, tragic close, we are affected. Perhaps to an extent disproportionate to the actual events, given our very real distance from those events and the people involved, but still. We are moved.

End of the day, if even one story can move us to hug our children, or our parents, a little tighter, or maybe work a little harder to ensure that we are weaving beautiful stories for our own families, leaving our own footprints in our own sidewalks, that’s a good thing.

Now excuse me while I close my computer to go carve my daughter’s initials in the tree outside our home.