The other day, Wonderbaby tried to run away from home. For the second time.

I fully expected that at some point in our family life, she would make a runaway attempt. I made my own first attempt when I was about eight years old. I can’t for the life of me recall the reason, but I’m sure that it was a response to some grave household injustice, and I studied The Mixed-Up Files Of Mrs. Basil E. Frankweiler, closely, for days in planning my escape. I gave up my plans when I got to the end of my driveway and realized that I had no idea how to get to the Metropolitan Museum of Art from the suburbs of Vancouver, Canada. But, yeah, I was eight years old. Wonderbaby is 28 months old. And she hasn’t even read The Mixed-Up Files yet, so how’d she know to layer her clothes and be strategic about what she stuffed in her backpack?

And why has she done it twice?

The first time was week before last. She got tired, apparently, of being bossed by Her Bad Grandma – who was staying with her while I was off doing some jet-setty momblogger shiz (which is to say, learning how to braid hair and catch my prolapsed uterus in a bucket) – and so gave Grandma an ultimatum: you go Gamma. Or I go. And when Grandma informed her that, no, she would not go home, Wonderbaby said OKAY I GO GAMMA YOU NO STOP ME and went to her room where she retrieved her backpack and open her drawers and began emptying them of her gear. Once the backpack was filled with toys and clothing, she proceeded – according to HBG, in a fit of high temper – to layer clothing upon herself, beginning with a variety of pants and shirts and finishing with her full-body-SPF-protection swim-slash-sunsuit and a pair of tights that she couldn’t quite get over her layers, much to her rage.

She then – backpack pulled firmly over shoulders – tromped down the stairs and put on her rain boots, all the while shouting YOU NO FOLLOW ME at Grandma. There was further hissy-fittage when she discovered that her coat wouldn’t go on over her overstuffed backpack, until she settled upon throwing a sweater over her shoulders like a cape and pulling a fuzzy snow hat – complete with ear flaps – over her head. At which point she reportedly told Grandma, again, a voce alta: I GO FIND MAMA YOU DON’T FOLLOW ME GO AWAY.

And headed for the door.

My mother, bless her heart, fought the urge to just let her go, although it was more, she said, out of fear of what the neighbours would think of a shrieking, be-hoboed toddler marching down the road than out of any real fear for Wonderbaby’s safety. And to Wonderbaby’s credit, she did eventually calm down and, with Her Bad Grandma’s patient help, put her things away.

Thus was averted a career of boxcar-riding and panhandling for Wonderbaby. Until a few days ago, when she tried it again, with me…

Wonderbaby, in full runaway regalia (multiple layers of clothing, mismatched boots, awkwardly tied, mittens, tiny suitcase in one hand, bag of diapers under one arm, Toadstool shoved in waistband of one of many layers of tights and pants): BYE MAMA. I GO NOW.

Me, exhausted and newly retired (in my own mind) from motherhood: Okay, sweetie. Bye.

WB, turning and walking away: OKAY. YOU DON’T FOLLOW ME.

At which point she tromped down the stairs and rattled at the handle of the (locked – I know my daughter) front door. A few moments later, after much exasperated huffing and dragging of miniature luggage back up the stairs, she reappeared at the playroom door.

WB, putting down bags and affecting her most serious look: I no go find better home.

WB: YOU GET ME MILK AND HONEY NOW. AND TREAT. 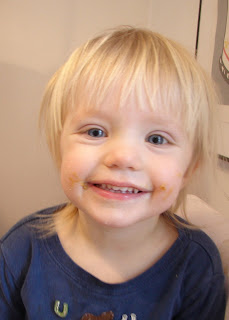 What was it that I said at the end of my last post? Oh, right… AM F*CKED.