And why not? If you were publishing a story about a certain blogging conference in the New York Times, and wanted an eye-catching photo to complement that story, the image of a heart-clenchingly adorable infant draped over his mother’s back as she bogarted a microphone at one of the sessions is far more arresting than the front view of said mother bogarting said microphone, no question.* 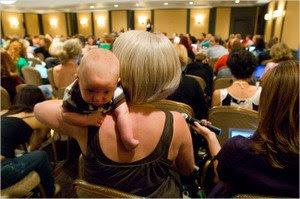 Front page of the New York Times Style section at ten weeks of age. The heart, it bursts with pride.

*No comment – YET – on the fact that the article makes women-bloggers sound like a bunch of sappy doofuses – doofi? – in which case, arguably, pictures of said women clutching their adorable babeez just underscores the relentless media focus on estrogen and vaginas and flowers and unicorns and shit when it comes to women bloggers, instead of the fact that we’re writers and tech-geeks and business-persons, but whatever. I’m still chuffed about the picture.