Jasper is not quite four months old. There are foodstuffs forgotten at the back of our freezer that are older than he is. To look at him and think, my, how fast they grow! is extraordinary. But it’s true. He’s almost doubled in size since he was born. He bears no more resemblance to the squawling newborn that he was four months ago than he does to his any of his sister’s toy dolls. He’s a completely different child. That thrills and terrifies me. 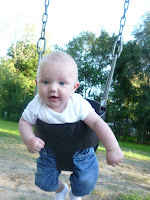 It thrills me, obviously, because it’s exciting to watch them grow, to see them unfurl from their fetal huddle and open, like fat little flowers unfolding toward the sun. It’s thrilling to watch as their fingers begin to grab and clutch, to listen as their gurgles turn into giggles and coos. It’s amazing to watch them turn into little people. But it’s terrifying, too. It’s terrifying because with every passing moment of growth and transformation, with every step taken toward the person who will be, I lose the baby that was.

I look at baby Jasper and thrill at his adorable baby-ness; the curve of his cheek, the soft pout of his smile, the way that his eyes crinkle when he’s snuggled in at the breast and tries to grin with a mouthful of boob. I look at baby Jasper and I wonder, what ever became of that other baby, that first baby, the baby that I snuggled and rocked and nursed two years ago? Whatever became of the baby Emilia, my Wonderbaby? Why can I not remember her perfectly, when I tried so hard to commit every curve and roll and fold of her baby self to memory, so that I wouldn’t forget? Why is the memory of that baby so utterly obliterated by the force of her two-and-three-quarter year old self? 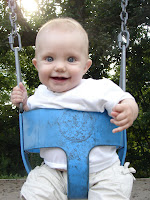 The force of that loss feels all the stronger, having recently visited my sixteen-year-old nephew on his sickbed and been confronted by both the fact of his undeniable teenageness and the fact of the diminishment of that teenageness through illness: there he was, all six-feet-something of him swaddled in hospital blankets like a baby and all I could think was, where has he gone? The teenager replaced the baby boy in him and the sick child replaced the teenage boy and I was left there, just holding his hand, missing him, willing him to open his big green eyes so that I could see his heart, the thing that is constant in him, the thing that is constant in all these children that we love, these beings who will grow and change and leave their littler selves behind. The heart, after all, remains the same, even as they grow and change or – gods forbid – become ill and diminished in illness. And so we mouth platitudes about clinging to their hearts. 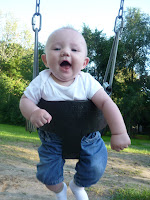 It is their hearts – Emilia’s heart, Jasper’s heart – that hold me, that bind me to them, that keep me rooted to their sides, loving them and watching them grow. But the little bodies that contain those hearts… aaaah, those I love, and have loved, too. And I miss them as they pass into memory. Their tiny hands, their tiny feet, their wee proud bellies cresting above bloated diapers as they lay giggling on the floor, squirming away from me as I blow wet raspberry kisses and make silly faces and clutch at their fat, ticklish legs. That was Emilia then, that is Jasper now, that will all soon be memory, fragile memory, the kind that lingers just out of reach, like smoke or mist, dissipating in the very moment that you reach out to touch it. Dissipating, disappearing.

I miss them, my children. I miss them even though I hold them close.

Is this why a parent’s love always dances on the razor’s edge of heartbreak? 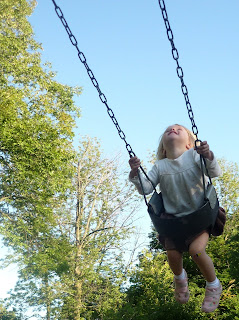 Still no word from WestJet. No word at all. So much for customer service.

The CBC video of my interview is now online and posted over at BlogHers Act Canada. Also check out Defining Someday’s Breastfeeding Without Blankets Blog Carnival – she’s rounded up a bunch of posts on this topic (let her know if you have one to add). And if you have a look at the trackbacks on both of my breastfeeding posts, you’ll see links to more really awesome posts on the subject. Do check them out – and let me know if you write your own.