Sings The Tune Without The Words 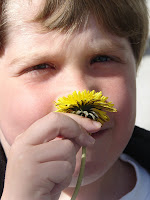 It’s been four years since my nephew, Tanner, was diagnosed with the condition that will kill him. During that time – which moved slowly at first, the disease not seeming to have taken hold in his little body, until he began growing faster, and it began its ceaseless attack on his muscles, crippling them and consuming them as the rest of his body grew – I never once saw my sister, his mother, cry. I knew that she did cry, of course, when the children weren’t looking, when she didn’t need to maintain a front of fierce composure, but her tears never spilled where anyone could see them. She was scrupulous about that. Tanner needed her to be strong, and so she was strong.

I wasn’t prepared, then, when she broke down in front of me last month, after we’d spent a week at the bedside of her eldest son, Zachary, as he lay hospitalized – tubed and wired and monitored against the infection that was attacking his spinal cord and nervous system – a week that we’d spent clutching hands and holding each other and her patting my back whenever my eyes welled up with tears: it’s okay, Cath, she’d whisper. Here, let me take Jasper if you need to leave the room. She hadn’t cried – although I felt her grief like an electric current, like a surge of energy that lashed out in so many broken wires, snapping and hissing, every time the doctors refused to give a prognosis, every time his father, her ex-husband, called and said that he couldn’t visit until very late, every time he flinched from pain, every time we left his room – she hadn’t cried, until we were many miles away from his bedside, and when the moment came, it surprised me.

I’d accompanied her to her doctor, to get some forms signed that would allow her to take yet another compassionate leave from work, so that she could attend to the business of watching over one sick son – too many miles from home, at the hospital for sick children – while making sure that the other son, the dying son, and the daughter, were cared for. He asked her how she was holding up, she told me as she walked out of his office. He asked her, and she burst into tears. The tears were still streaming down her face.

We were silent as we collapsed Jasper’s stroller and loaded it into the minivan, in the back, where Tanner’s wheelchair sits on the lift that was specially installed so that Chrissie could drive him around, so that he could go to school and to swimming and on errands with his mom, just like a regular boy. She didn’t say another word until we were in the front seats, her keys in the ignition. I feel like I’ve been raped, she said, the tears still streaming. I feel like I’ve been raped and beaten. It hurts that bad. She put her head on the steering wheel.

I told the doctor, sitting at Zach’s bedside, watching him, worrying that he would die, it was too much hurt, she said, not lifting her head. I told him I feel like that this was a dress rehearsal, like I was practicing for sitting by Tanner when the time comes, except that I won’t be hoping he won’t die, like with Zach, I’ll be knowing that he will die, knowing that he won’t leave the hospital, ever.

Her hands gripped the steering wheel, her knuckles white, her head still down as her body shuddered, sobbing. I put my hand on her heaving back; I stroked her long hair. I didn’t say anything. I didn’t have any words for her.

I didn’t have any words for her, because there are no words. There’s no lesson to be pulled from her experience, no philosophy to apply, no narrative that will make things better. This story already has its narrative, and although it’s tempting to impose philosophies and draw lessons – how precious life is, how precious love, how fragile the former, how enduring the latter – these are meaningless against the impending conclusion of this story, the loss that looms not like storm clouds but like a great, gaping black maw, a black hole of nothingness. There is only the inevitable conclusion of this story, and its finality. If it holds a poetry it is a wordless poetry, a song without lyrics that strums the distance between love and loss, light and dark. If it holds this poetry, it is well beyond my grasp to seize it. I can only witness, mute.

I have no words. I have nothing to give to my sister, only love, which is everything, I know, but still – it’s nothing in the face of so much pain. And so we can only march, together, bound by love, bound by pain, struggling with these and against these bonds to wring as much love-beauty-joy from the journey, while it lasts.

I can do one thing with my words, though: I can ask others for help. Chrissie will be running, in a few months, in a marathon to raise money for Duchenne’s research. There’s no cure for Duchenne’s, but there’s always hope, and Chrissie is running, as always, for this hope. With my words, I can cheer her on, and I can ask others to cheer, and to help by cheering and to cheer by helping.

You can donate in Tanner’s name here. It probably won’t change the ending to this story, but it will help the narrative maintain a recurring theme of hope. And that, right now, is all.

(I’m closing comments. Please use whatever energy you might have spent sending your love and good wishes and use it to pass this story along, or, maybe, to click the link and give a dollar or two in Tanner’s name. Thank you, as always. Thank you thank you thank you.)