Rainy Days And Mondays And, Also, Zombies, Get Me Down

I don’t have anything personal against Monday. It’s not like Monday’s ever done anything to me that she – oh, don’t give me that, you know Monday’s a she – hasn’t done to every other living being on the planet – pine beetles hate Monday too, pass it on – it’s just, you know, Monday. BLAH. I’m just never ready for it.

(I know. I work at home. In my pajamas. So what am I complaining about? I work at home in my pajamas, surrounded by chaos, with a baby chewing on my leg and a three-year old shrieking at eardrum-shattering volume and cats dragging dismembered Dora dolls under the sofa for further gutting. It’s like Resident Evil around here, but with babies instead of zombies and no Milla Jovovich coming with a team of commandos to save me. So.)

Where was I? Right. Monday. 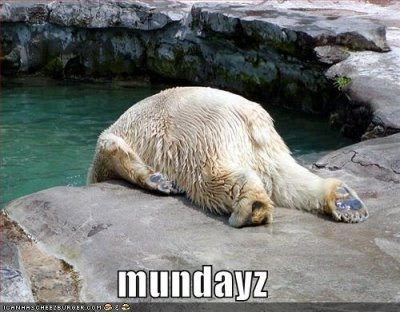 It is Monday and I have had neither sufficient caffeine nor B12 vitamins to kick-start anything approximating energy or will or lifeforce and so all you get from me today is what you got last Monday: weak jokes and some links.

1) CNN linked to me today. But it was about breastfeeding stuff and we all know how that goes. Wee bit of a traffic spike, but also: mean e-mails! And stupid comments! Telling me to COVER UP MAH BOOBEEZ K THX!

Can I just put this out there? Could everyone out there who is skeeved, squicked or otherwise disgusted by breastfeeding (in any and all of its forms) please find a more interesting way to express your belief that your right to not be skeeved, squicked or yucked overrides my child’s right to be nourished than EW BOOBIES GROSS WHY CAN’T YOU JUS COVER THEM SELFISH BISH?!?!? Or, maybe you could, just, you know, look away?
Thanks.

2) My mother is persisting with this whole blogging thing. And now she’s threatening to be – quote – ‘a thorn in (my) side.’ Also, she wants to tell you about the ‘deep V’ tanline caused by her grandma-boobs and bitch about her bifocals and, maybe, give other grandparents advice on how to torment their children by corrupting their grandchildren. This is either going to be really terrible or really awesome. Probably both.

3) The Basement. It’s not a happy place today.

4) No, I didn’t purchase the DVD of the movie Twilight this weekend. I wanted to, though. Mostly because I’ve heard that Robert Pattinson’s commentary is bust-a-gut hysterical (Robert Pattinson, who is on record describing his character thusly: “When you read the book,” says Pattinson, looking appropriately pallid and interesting even without makeup, “it’s like, ‘Edward Cullen was so beautiful I creamed myself.’ I mean, every line is like that. He’s the most ridiculous person who’s so amazing at everything. I think a lot of actors tried to play that aspect. I just couldn’t do that. And the more I read the script, the more I hated this guy, so that’s how I played him, as a manic-depressive who hates himself. Plus, he’s a 108-year-old virgin so he’s obviously got some issues there.” How can you not love this guy?) and I could totally get on board with having my gut figuratively busted.

Instead, I just read pretty much the entirety of Cleolinda’s commentary on everything Twilight. And busted a gut. Seriously. BETTER THAN THE BOOKS. Almost.

5) They should do a remake of Resident Evil, but with cats. They could get a Siamese to play Milla Jovovich’s role. That’d be funny. 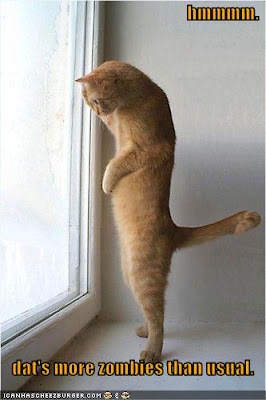 This is the shit I think about on Mondays. It’s a kind of hell.

(Closing comments because, seriously, I am exhausted UP TO HERE with debating breastfeeding. Comments are still open at the CNN-linked post, but having responded to one stupid comment there I am already spent and have given up. Reading about Twilight is a far better use of my time today.)

I’ve Looked At Boobs From Both Sides Now

Shame And The Mom: A Boob Story