Steve Jobs Was Planning This All Along

Jasper loves the iPhone with a passion that exceeds my own, which is saying something, because it is only a slight exaggeration to say that I would save my iPhone before my husband if we were in a sinking raft (this was a favorite heuristic device of an old philosophy prof of mine, one that he believed demonstrated something important about the complicated nature of predicting altruistic behavior. I was never able to answer the question – would you save a loved one, a family member, or your pet? would you save a loved one or Brad Pitt? – without deliberating at length. Which loved one? How far is it to shore? Can my loved one swim? Would Brad Pitt thank me? How would he thank me? I would ask. I got an A in that class.)

Jasper would save the iPhone, no question. The rest of us would drown, and Jasper would go on his merry way, playing Elmo’s Monster Maker uninterrupted.

It bothers Kyle that Jasper loves the phone. “PONE!” Jasper will holler, causing Kyle to wince. “WANT PONE!” Sometimes, if he’s not feeling too frantic about it, he’ll add, “PEEZ! PITTY PEEZ? PONE? PONE!” If he sees one laying around, he’ll just grab it and swipe through to his favorite apps. He can find Pocoyo on YouTube in about 20 seconds.

“This doesn’t bother you?” Kyle will ask.

“At least he’s not standing in front of the television, screaming for Barney.” In my opinion, any activity, short of toddler pole classes, is better than watching Barney.

What worries Kyle, though, isn’t so much Jasper’s mastery of the iPhone – at this rate, he’ll be designing next-gen iPads before he’s five, which, although creepy, maybe, is not the worst thing – as it is his enthusiasm for it. Jasper hollers for PONE! in the morning and he hollers for PONE! at night and although he can be talked out of wanting or having PONE! – sometimes with some difficulty, and most times only with the offer of his skateboard – which, in this case, means that he ends up sleeping with said board, which is only marginally more cuddly than the PONE! – it remains that the PONE! is one of his very very favorite things ever and that’s a little weird. He is, after all, two. 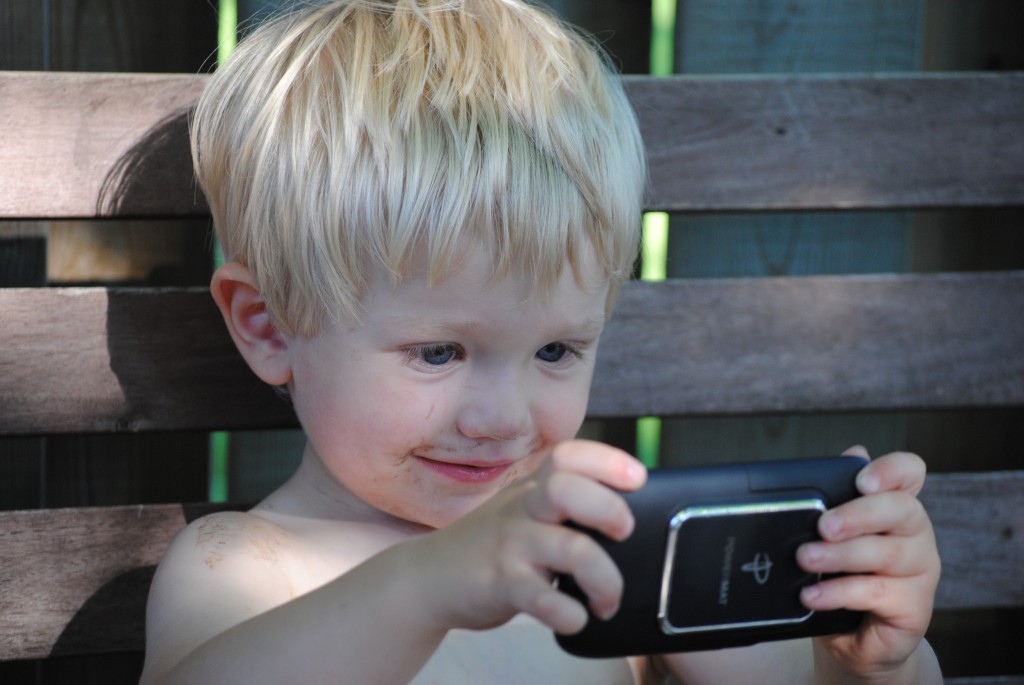 But he doesn’t really watch TV, like, ever, and he has developed an uncanny knack for solving slider puzzles and he plays counting games and word identification games and he prefers animated shorts from the National Film Board of Canada’s archives to Barney. The significance of which, really, can’t be overstated. NO BARNEY.

So, Internets: at what point does one try to take a step back from the dimpled, half-naked toddler who is clutching an iPhone to his chest like a teddy bear and admit to oneself that the child maybe has an addiction, and that one giggling at oh my hell how adorable is it that he can navigate the National Film Board application all the way to The Hockey Sweater (“they were five Maurice Richards against five other Maurice Richards!”) is just enabling him and maybe, maybe, one should be trying to wean him back on to TV? Which is to ask: should we be worried? Should we sue Apple for the corruption of minors? Or should we just get an iTouch and let him stash it in his diaper, and then send him to Cupertino as a junior intern when he’s five?