To Dwell In Unapproachable Light 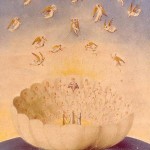 Today is All Soul’s Day, or the Feast Of All Souls, which is a name that terrified me as a child, because I imagined that it referred to a sort of buffet of ghosts, which, really, is a discomfiting idea at any age. But it’s not a ghost buffet, thankfully (or regrettably, depending on how dark your interests skew): for Catholics, it’s the rite of The Commemoration of All the Faithful Departed, which means, basically, it’s the rite of remembering and praying for those we love who have passed and who have not yet – yet – reached what Catholics call the Church Triumphant (Heaven) and the ‘beatific vision’ of God. It follows All Saint’s Day, which celebrates the souls of the just who have reached the Church Triumphant and are, presumably, getting down with some celestial karaoke and partying with the Lord.

This is one of the teachings of the Church that caused me to wander away, confused and frustrated. It seemed to me to make Heaven out to be some kind of super-elite after party to which one could only be admitted if one had made all the right connections and got the invitation and the directions and followed them to the letter and knew the secret password – in Latin, of course – and had their name on the guest list and also was wearing just the right outfit and also probably knew the bouncer. Which somehow just struck me as wrong. What if someone was a good person – really, truly good in their heart and in their soul – and just hadn’t been hip to all the rules? What if someone were really truly good but had become disillusioned by the sometimes very dodgy mortal politics governing entrance to that party and decided to not participate in what sometimes amounts to nonsense and other times to very grave harm? What if someone were really truly good and had just gone about getting to know God in their own way and had really believed that they’d established a relationship with God and that God would totally have wanted to party with them in Paradise, or at least just grab a coffee and chat? What then? Would God just say, oh, hey man, you didn’t get that secret password from those dudes in the robes? Can’t let you in! Yeah, I know some of them were sometimes skeevy and some of them maybe burned some women as witches and maybe some of them launched the occasional violent Inquisition or two but still: they’re my posse. You’re not down with them you don’t get in. SORRY.

I tell myself that it simply cannot work that way, that a just and loving God would not deny souls entrance to Heaven on the basis of technicalities, that Paradise – whatever that means, whatever that looks like – would not be run like a country club with obscure rules and high barriers to entry, that the ‘beatific vision’ would be offered to men who burned women as witches at the stake or who protected child-molesting priests and not to Plato or Gandhi or my dad. I tell myself that the God that I was raised to believe in would have no criteria other than the goodness of hearts, no standard other than love. I tell myself that if that’s not how it works, then I am right to turn my back on it, that this is what so troubles me about organized religion, about the organized religion that I was raised in and that I wring my hands about, constantly.

I am telling myself this today, as I wait to hear the bells from the Catholic church down the street, as I sit and think about death and souls and the beatific vision of God, dwelling, as 1 Timothy says, in unapproachable light. And as I remember my dad, who was good, who was so good, who was so gentle and loving and wise and just and sweetly eccentric in the most beautiful way, and who I know – I hope, I pray – can feel the warmth of that light.

I am telling myself this today. And I am believing it, or trying to.