If A Christmas Tree Falls On Your Kid, And You Don’t Film It, Did It Happen? 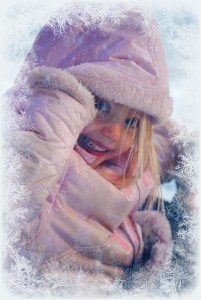 I’m not a professional photographer. Nor am I professional filmmaker or documentarian. But I do tell stories, and a lot of those stories are about my kids, and telling stories about my kids involves using photographs and video. So I am, if you will, a Semi-Amateur Multimedia Documentary Artist and Chronicler Of Family Narratives, and I do an acceptably decent job of it, if I do say so myself.

But it’s a job that has had a somewhat steep learning curve. Capturing the most narratively interesting moments of family life is only slightly less complicated than filming meerkats, not least because small children are less predictable than meerkats. Capturing the movements of children on film during the holidays is considerably more complicated than filming meerkats,  because during the holidays children tend to be jacked up on candy canes and Santa, and meerkats, to the best of my knowledge, don’t get all that excited about either of those things. But it’s not impossible, and well worth the effort, because although meerkats are awesome, they are not nearly as funny and adorable and documentary-worthy as your own children. You can make an awesome photo collage or montage or video that captures the awesomeness of your family during the holidays, and you should.

So, herewith, and humbly, some tips from me on how get adequately amazing footage of your family, whether on digital film or video or sketchpad, and use it to craft some remarkable holiday memories. (Or, Tips For Being An Awesome Documentary Filmmaker/Photographer/Auteur And Creating The Best Family Holiday Video/Photo Album/Virtual –Slideshow-For-Your-Mom-Blog EVER, Even If You Have No Idea What You’re Doing At All, Really. Or, Failing That, How To Get Just Enough On Film So That You Don’t Forget What Your Kids Look Like.) (Read all the way to the bottom! There is music! And PRIZES! And other feel-good things!)

1. Have your equipment ready.

How many times has your toddler stumbled into the room wearing a diaper, a Santa hat 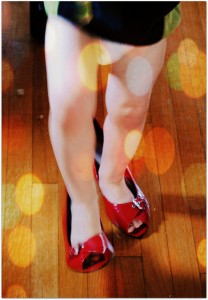 and a pair of your heels? Just once? Did you have a camera or video device ready to capture the moment? Nope? You must be me. I try to keep my camera fully charged and in a central location in our house over the holidays, so that I can reach it quickly when the kids do something that seems worthy of the front of a Christmas card. Same goes for my video camera, and my iPhone (which substitutes for camera and video equipment in a pinch, and which actually stays tucked in a pocket or – yes – in my bra at all times.) I also keep my camera set to my preferred indoor setting – even though I prefer to shoot manually whenever possible, if I’ve only got a forty second window to capture Jasper in high heels, I’m perfectly happy to use the most efficient automatic setting rather than have him disappear while I fiddle with the f-stop. (If you are like me, and forget where your real camera is, just pull the iPhone out of your bra and get whatever footage you can. You can always fiddle with it later – as I did, in the picture at right, which is heavily LoMobbed and Pikniked.)

2. Spend some time reflecting on who your children are and what it means to ‘capture’ them.

If you were a photographer of horses, you wouldn’t approach taking pictures of horses from the standpoint of getting horses to pose for horse portraits. Not that that couldn’t be awesome, but still: you’d follow horses into the field and snap them trotting and cantering and loitering by fences. You’d try to get pictures of horses being horses, not Sears Portrait Studio models. (Meerkats, on the other hand, will sit for Sears Portraits, but that’s only tangentially relevant here.) You want to bring the same spirit to taking pictures or video of your children: you want to capture them as the children that they are. Are they happiest frolicking in snow? Baking and eating cookies? Snuggling by the fire? Wielding chainsaws? All of the above? Aim to get photographs and video of those things, as opposed to stiff portraits by the mantle or the Christmas tree.

Yes, really. You should try this. I promise you that you will get some weird and wonderful suggestions – my children suggest things like ‘Emilia’s Super Happy Music Show’ and ‘Jasper The Tutu Dancer With Superpowers’ –  and that your children will participate enthusiastically. And that the results will be amazing, or, at least, really, really funny. 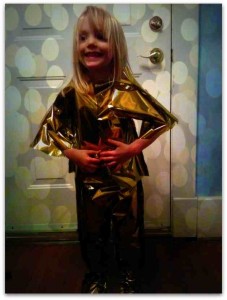 If you follow the two tips above, you’re already well on your way to doing this, but it bears underlining: anybody can get a picture of their kids in front of the Christmas tree, or take a video of the school holiday pageant. It’s almost a certainty that you will shoot those things. But unless the tree catches fire as you’re snapping the photo, or your child falls off the stage at the pageant while the camera is rolling, these are unlikely to be the images and clips that you will pull out every year and marvel (and/or laugh) at. Look for other, different opportunities to get really interesting photos and video footage: bring your camera along as you and the kids deliver holiday cookies to the folks at the seniors’ home; take some video while the build a snowman (and if you have to toss a surreptitious snowball into the mix to get them scuffling, then don’t hesitate to do so, because scuffling makes for good video); take pictures of them wrapping gifts (you might consider urging them to wrap each other) (this is what happened in the photo at right) or creating a very ugly gingerbread house. Ugly gingerbread houses are funny.

5. But if you’re really attached to conventional holiday images, embrace that. 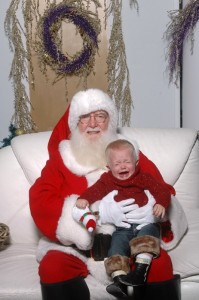 Take a ton pictures of the Christmas tree and make a cool montage (try Piknik for making great collages and slideshows out of pictures), or get creative with them in an editing suite (again, Piknik is great for this, and most of its applications are free). Take that video of the holiday pageant, but then run clips of it through an application like VintageMaker (an iPhone app that can turn your small people into little Buster Keatons), or edit in funny remarks in subtitles. Or just take your Santa-phobic baby to the mall and keep your camera handy. Creativity is easy with the right technology, and a willingness to take liberties with your children’s dignity.

6. Don’t be afraid of staging.

That random, rogue snowball toss that I mentioned above? I totally wasn’t joking. Set the scenes that you want to capture! Don’t just wait for your kids to start a snowball fight: initiate one yourself! And then back away and pull out the video camera and let the digital film roll. Later, after you’ve set the whole thing to Wagner’s Flight Of The Valkyries, you’ll thank me, and also congratulate yourself on your cinematic genius.

7. Be prepared to bribe your children.

Look, I’m not condoning bribery in general. I’m just saying that there will be some moments over the activity-dense holidays when you will want to get something on camera and your children will be resistant and – because that perfect snowfall isn’t going to last all day – you might need to offer them a little, you know, incentive to get them to agree to stand still or to speak into the video camera or whatever. I recommend candy canes, or cash. This is art. You do what is necessary.

Read more of my tips at Intel’s Get In To Win Facebook page at facebook.com/intelcanada. It’s a great promotion, with over $20,000 in prizes: there are prizes for the most inspiring/interesting/innovative photos or videos, which will be chosen from the top 10 submissions with the most votes, AND there are also 10 weekly prizes, and ALSO, just for voting, you could win a grand prize worth $4500. So post your photos or videos and share your story and tips and ask Santa to send you a WIN.  I’m going to be checking in daily to the facebook.com/intelcanada site, checking out entries, commenting on cool stuff that I see and answering questions and being all chit-chatty, so we can, like, hang out there.

And, in case you need more inspiration to enter, how about this: leave the entry link for the video or photo that you post at facebook.com/intelcanada in the comments right here, and I’ll give away a Sony Bloggie camera (I used one to make the video that you can see at this page) and 6 copies of downloadable versions of Sony’s Photo Go. You have till Dec. 21st to send me your link;  I’ll randomly draw the 7 winners and announce them on that date. (If you’re not Canadian, leave a comment telling me how you capture the moment; I’ll randomly draw winners to receive chocolate.) (Don’t say I never gave you anything.)

And because holiday awesome just shouldn’t be limited to those of us who already have laptops and cameras and whatnot, I’m also going to donate an Intel-powered notebook to a women’s shelter or another like organization – basically, get some computer/social media power into the hands of some women who don’t have access to it – so leave suggestions/nominations for an organization in Canada that could benefit from such a donation, and I’ll select one from your suggestions and get it to them.

So, what do you do to capture the moment?

And the Intel-powered notebook? Will go, on Laura B’s suggestion, to the Stella Bury Foundation’s Naomi Centre.

Thanks, all. You are very awesome people.