A Shoe Is A Wish Your Foot Makes

My weekly wardrobe looks something like this: pajamas/hoodie, pajamas/hoodie, yoga pants/hoodie, yoga pants/Minnie Mouse sweatshirt, pajamas/Minnie Mouse sweatshirt, pajamas, pajamas. If I have to go outside, I add knock-off Uggs and a puffy ski jacket. If I have to go out anywhere other than school, daycare, ballet, karate or grocery shopping, I’ll swap the pajama bottoms or yoga pants for jeans. I am style, personified.

The thing is, I work at home and at home, for much of the day, the only people around to judge what I’m wearing are the cats. The cats don’t care. They don’t see the need to get dressed up at home either. Why waste precious minutes getting dressed that could otherwise be spent reclining in sunbeams? Or, in my case, posting about sunbeams on Twitter?

I do, however, wear real grown-up clothes when I leave the house to do real grown-up things that involve being around other real grown-ups in grown-up clothes. Because, one wants to fit in. One also wants to take advantage of any opportunity to wear pretty shoes that one can’t wear at home with one’s yoga pants, not because one has any sort of sartorial objection to wearing pretty shoes with yoga pants – one doesn’t – but because one would inevitably break one’s neck tripping over a Thomas train if one wore heels in her home as a regular practice. Which is to say, hell yes I wear high heels when I venture out in the great wild world of grown-ups. How could I not?

This week, I cannot. I am packing for my trip to Nashville, for Blissdom, right this very minute and there is nary a heel to be found. That this distresses me should go without saying. But I’m not supposed to wear heels right now, for reasons that involve a hip injury and a longstanding scoliosis condition which was worsened by said hip injury and which causes me, now, to lurch to one side like Quasimodo and also to experience a great deal of pain which, truthfully, is only marginally less upsetting than the fact that I lurch to the side like Quasimodo. (Over the holidays, when I was limping around, Tanner watched me very carefully for a while before wheeling up to me and asking, very earnestly, “so, what’s your disability?” That I had to think about it – and that the aggravated scoliosis wasn’t the first thing that came to mind – is some cause for concern.)

So I won’t be wearing high heels this week. I will be wearing flat shoes – flat shoes, flat boots, shoes with orthotic inserts, shoes with inner Frankensteinian lifts – and I will be very unhappy about it. I know that this is peevish of me – Tanner is my reminder that as far as disabilities go, the inability to wear high heels is not a particularly serious one – but still. Shoes! Pretty, pretty shoes! I want so badly to wear them.

(Maybe just this one pair, maybe just when I’m sitting down? 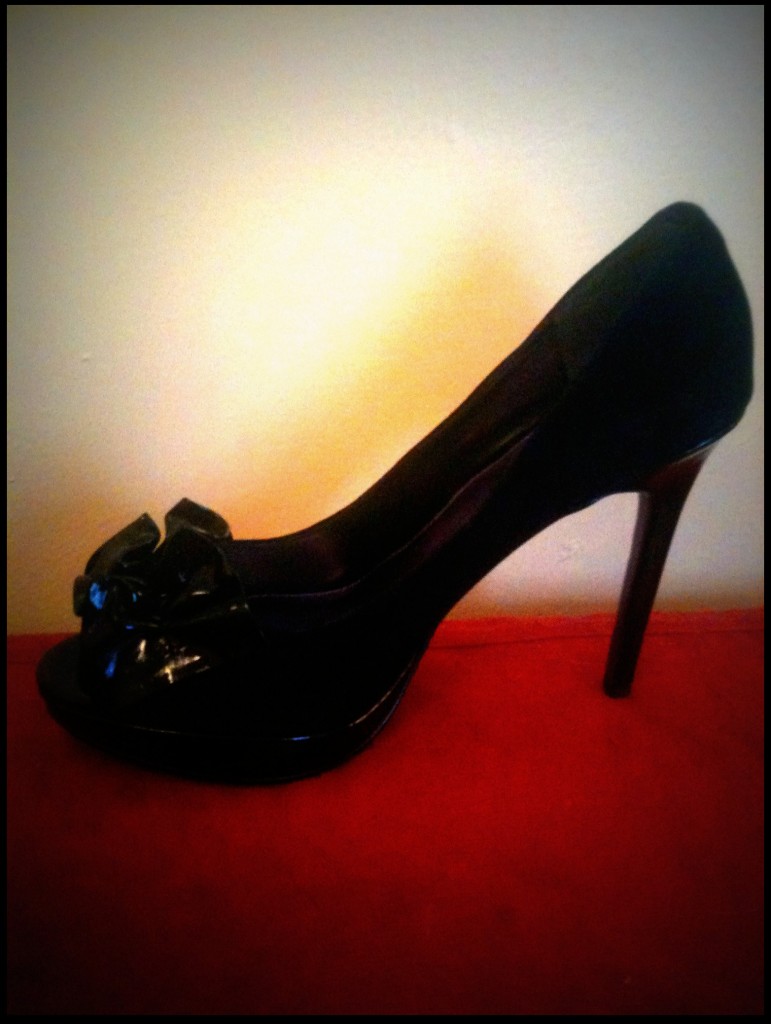 You won’t tell on me? Please? Pretty please?)

What I’ll be talking about at Blissdom: using social networks like Twitter for good (with Claire Diaz Ortiz, and this fine fellow), with reference to this whole thing, of course, among much else. And about awesomeness in general. I might wear a tutu. Ballet flats go nicely with tutus.