Madonna Of The Sharks 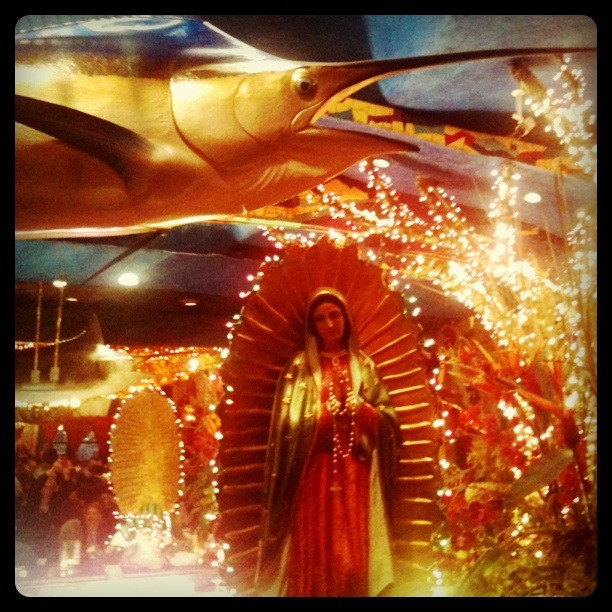 Or, The Adoration Of The Blessed Virgin By Charlie The Swordfish

I’m having trouble deciding what to give up for Lent. The obvious choice is coffee, because I’m addicted to coffee and it brings me untold pleasure, but the trouble is, I’m addicted to it and it brings me untold pleasure, which is to say, if I gave it up, I would become very, very bitchy, which is directly contrary to the spirit of Lent, as I understand it. Last year, I tried to give up chocolate, and failed. So I’m thinking that this year I should aim for something doable, like giving up raisins. I hate raisins. That misses the whole point of Lent, I suppose, but still.

1.) I’m going to Austin this weekend. I went to San Antonio last weekend. I’m not sure why I’ve been spending so much time in Texas of late, but there you have it. You could go to Texas too, if you want. I’ll send you there. No, really.

2.) I had a religious experience while I was in Texas. And not the kind that involved margaritas. Although there were lots of those, too. Also, maracas.

3.) I’m reading Peggy Orenstein’s Cinderella Ate My Daughter, which is a fun book to read, even though – or maybe because – I’m just not as worried about princesses as she is. Maybe I just haven’t thought about it carefully enough, but I do keep a copy of Bruno Bettelheim’s The Uses Of Enchantment on my desk and also own the complete works of Judith Butler, so. It’s not like I’m not capable of thinking about it carefully. In any case, seriously: as long as the princess canon includes Belle and Mulan and also maybe Tim Burton’s Alice (not a princess, I know, but still), I’m not all that bothered about it. Also, why don’t we get all agitated about pirates? Pirates are kind of dodgy, you know.

4.) Numb sphincters. I’m not sure what it means, either.

6.) I still want you guys to come out to this, if you’re local or local-adjacent. It’s for a cause – it’s for Tanner – but I’ll also be making an ass of myself, which is always something to see, so.