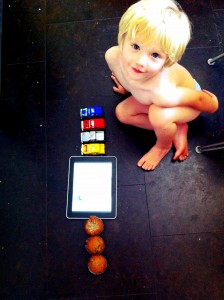 But some might argue that that’s not really reading. It’s certainly not the kind of reading that I did as a small child. It’s not even the kind of reading that Emilia did at his age. Virtual stories – stories on tablets – sometimes involve sound, which is not really something that you find in traditional books, ordinarily. Virtual stories sometimes involve moving images, or clickable links that take you to another part of the story, or that produce pop-up images, which, again, are rare in hard-form books, unless you count actual pop-up books, which maybe you can.

Because here’s the thing: children’s books and children’s stories have always involved some sort of interactivity: whether you’re talking about pop-up books or nursery rhymes that are sung and danced or books like Pat the Bunny that allowed you to, you know, pat the bunny (I always thought that the bunny was named Pat. I didn’t fully grasp that ‘Pat’ was a verb, not a noun, and referred to the act of patting, until after Emilia was born and I read it aloud to her. This reflects badly on me, I know.) And virtual storytelling just takes this interactivity to a different level. Not a better one, necessarily, but a different one. An interesting one.

So we’ll continue to let him hog the iPad, and then, at some point, we’ll get him an e-reader, or whatever the kid version is of an e-reader, and see what happens. And we’ll continue to keep the bookshelf stocked with Eric Carle board books and my own worn childhood copies of The Velveteen Rabbit and Alice In Wonderland and the adventures of the Famous Five and the Bobbsey Twins and, of course, the Chronicles of Narnia and the works of Roald Dahl and I’ll pull these out for my children and we’ll read them and we’ll love them and if we end up also downloading the virtual versions of those stories, well, so be it.

It’s the story that matters, after all – not the medium.

The National Film Board App: Best. App. Ever.