Two-Headed Robot Zombie Monsters Are Not The Only Fruit

Here’s the thing about Halloween with kids: dressing kids up is wildly fun, when you have control over the dress-up process. When you get to decide what they wear – which is to say, when you dress them up in whatever fashion amuses you – the whole exercise is awesome, and well worth the energy required (and you do need energy. Wrestling squirmy babies into chicken outfits is not for the faint of heart or weak of arm.) 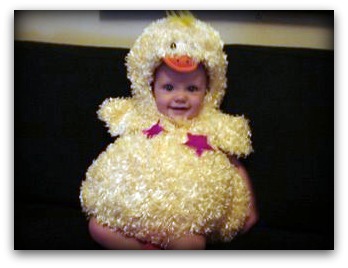 Okay, so she was a duck, so, more fowl than poultry. Also, she was in pasties. Which is like fowl with garnish.

It’s most awesome when you can dress them up in ways that are borderline inappropriate, or would be if your neighbors had any familiarity with the works of Anthony Burgess and Stanley Kubrick (ours did not): 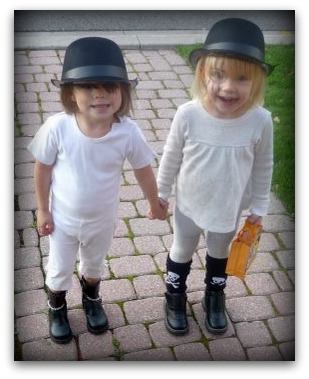 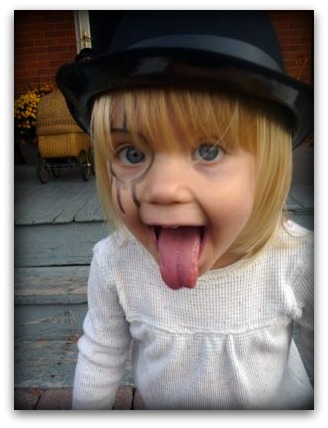 Dress your children in thuggery and bowler hats.

HOWEVER. You have a very, very small window of time in which to enjoy the game of Dress Your Children As Waterfowl And Dystopian Thugs, because once they get to a certain age – in Emilia’s case, four – they will demand to dress themselves, and that, my friends, is much, much less fun.

Well, sort of less fun. When your child’s interpretation of ‘costume’ is ‘Halloween Monster Robot With Stickers And Jewelry And Also Two Heads,’ you kind of have to give up and admit that your imagination is slightly more limited than hers: 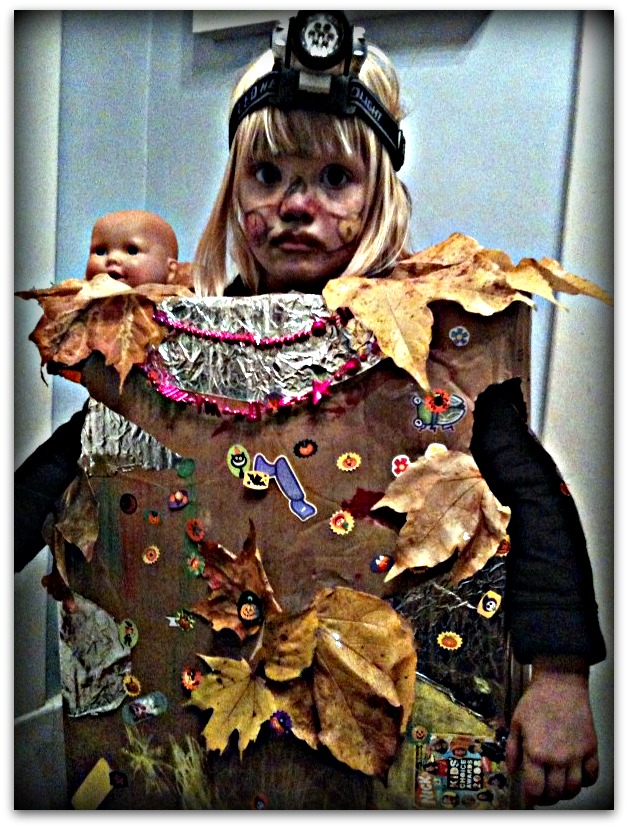 I’ll let that just sink in.

This year, she wants to go as a strawberry.

‘You mean, as Strawberry Shortcake?’

Which defeats my powers of costuming. I purchased a Strawberry Shortcake hat for her, because it’s, like, a berry hat, which is something, but that really only gets us, in the process of fruitifying her, as far as her head. I thought about finding a red pillowcase and stuffing it, but I have no sewing skills – like, zero – and am not sure how I would seal it and fasten it to her.

And then there’s this: “and Mommy, I need to be a princess strawberry, who is also maybe a superhero.’

Um, okay. Like a princess in a strawberry dress?

“No, Mommy. A strawberry who’s a princess, and also a superhero. YOU’RE NOT LISTENING TO ME.”

So she’s got me. How do I make this costume, and how do I make it out of materials that I have at home? Or do I just try to convince her that Droogs are totally like fruity superheros with royal lineage? Or, you know, bust out the cardboard boxes – of which we have many –  and tell her that she really needs to upgrade her 2009 Two Headed Monster Robot to the 2011 three-headed model?