The Mommy Wars, Redux: Why Can’t We All Just Get Along?

Oh, hey! Remember when I posted about being unfriended on Facebook for being a stay at home?

I received the following message via Facebook today. I think that it’s pretty awesome. And by awesome, I mean, so profoundly insulting and ignorant that I actually yelled out “REALLY???”

I know I probably shouldn’t say this, but I have to ask you, how did you end up a “stay at home mom” with no job after all the university you took? … I have to take you off my Facebook as it is such a disappointment that you never did anything with your life and you do this all day… it was not what I would have imagined for you Catherine… so sad.

So there you have it, people. I am a disappointment. I have no job. I am doing the worthless and pathetic work – wait! no! unwork – of raising two beautiful children, when instead I should be, I don’t know, out there in the world using my years of education to teach other peoples’ children about Plato or sell cola or design widgets or something really meaningful. Because raising children isn’t actually work, right? It doesn’t actually contribute to society. And, of course, the fact that I write about parenthood and children and family and the condition of love in post-modernity is just, you know, pffft, whatever. Who reads that stuff? What does it actually contribute? What good am I really, people? What good are you? You should go have a good think about that.

In related news, I think that we’ve found someone worthy of the given name that corresponds to Emilia’s new favorite word.

UPDATE: Although this person was determined to unfriend me for being such a disappointment, she waited to do so until after I had responded to her message, at which point she said, among other things, this:

As for my opinion on “stay at home mothers”, I do have a thing about stay at home mothers as I do not think a man should make all the money and the wife stay home and not have to work (just to raise the children)… that is just my believe (sic). I think both people should work and everyone I know work (sic) and take care (sic) of their children.

So there you have it! It’s a sexism thing! Women staying home and not working – you know, just raising children, which as we all know means sitting your ass and eating bon bons all day and contributing to the public good in no way whatsoever – is sexist and backward because it means that the man does all the work and makes all the money and the woman is just – what’s the word? – kept. Silly whores, all of us. 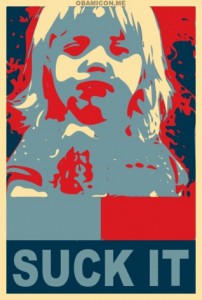 I kind of thought that that might be the end of it. I mean, there were a couple of hundred supportive comments, expressing outrage and disappointment, and everyone that I spoke to about the incident agreed that the kind of person who would say this kind of thing, in this way, was batshit crazy, and also sort of illiterate. Most sensible people agreed, it seemed, that this was an offensive, retrograde opinion. Most people agreed, it seemed, that judging mothers at all for whether they work in or out of the home was offensive and retrograde.

But then Anderson Cooper decided that it would awesome to have moms go all batshit judgypants on each other on his show, the better to cause skirmishes and catfights! And Dr. Laura thought that this would be awesome, too, and dedicated twenty minutes of one of her programs to ripping working moms new perineal tears. Which, my god. Seriously? WHY DOES THIS ISSUE JUST NOT GO AWAY?

So we decided to do a salon discussion about it over at Babble – about the question of why the Mommy Wars keep coming back, like great lumbering armies of the undead, groaning and lurching and pissing everybody off – just so that we could maybe, maybe, start to make some sense out of this. Or not. At the very least, we hope to leach some of the judgment out of there. Go check it out, and do weigh in. Why do YOU think this issue keeps coming back? Why CAN’T we all get along?