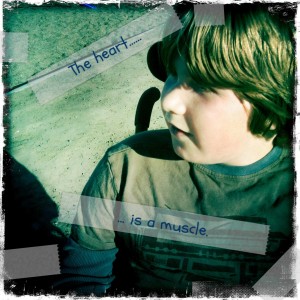 I don’t write much about Tanner these days. Tanner is becoming more and more the owner of his own story, and more and more concerned to keep it his own, for as long as he has it. Even as his body fails, his mind and spirit move forward – now, into adolescence, with all of its exquisite sensitivities and anxieties – and you know how you didn’t want anyone to even look at you when you were twelve? That.

He just wants to be normal. But that’s complicated. And talking about those complications – and all the things that go with those complications, whether they be related to the conditions of his disability, his prognosis, the social issues that he faces (don’t get me started on the bullying thing again) – is important, because he’s not the only boy whose life has been made complicated by DMD. He’s not the only child whose life has been made complicated by disability and terminal illness. His is not the only family to struggle. So I push his story forward, again. And again and again and again. Exercising my own heart as a muscle – all of hearts, as muscles – requires it.

This is from last year. But it expresses perfectly everything that is terrible and heartbreaking about this. I’ll find new words of hope. Soon. —

Every visit to the doctor, now, brings bad news. In the early days, there were reassurances and messages of hope – some boys make it out of their teens, there are ways to slow the deterioration of his muscles, he might stay mobile for a long time, he might still get to enjoy some of his boyhood in the ways that other boys take for granted – but now, there are only somber descriptions of what will happen next, of what needs to be done to make things easier, of what use can be made of his diminishing time.

They want to put rods in his spine, she tells me. So that he can stay upright for a bit longer.

Rods in his spine. He won’t be able to bend, I think, before remembering, he cannot bend now. Not in the real, active sense of bending, anyway: he slumps, he droops, he slides forward in his chair, unable to hold his own weight even while sitting, a Pinocchio without strings. His spine is collapsing under the weight of his body, his muscles having deteriorated beyond the point where they can provide any support. He’s like a doll now, a puppet. But he has no strings by which he might be pulled up. He has no Blue Fairy to wave a wand and make such strings unnecessary. He has only surgeons, and rods.

Rods in his spine. I imagine steel, or rebar, those skinny ridged bars that are laid in concrete, because even concrete isn’t all that strong, even concrete needs extra support, and what are muscles compared to concrete? Even concrete sags, to say nothing of wood and fiber and the things of which dolls and puppets are made, to say nothing of people, made of flesh, made of muscle. This is not reassuring. This does not make me feel better. Muscles, concrete, steel, wood, puppets… this is a grim fairy tale.

I focus on the rods, of course, because they are so visual, so visceral, so evocative of things that are monstrous (Dr Frankenstein and his wires and bits) and things that technological (“we can rebuild him“) and things that are magical (Pinocchio’s stiff, wood-rod arms and legs, made flesh, made malleable, with one wave of a fairy’s wand). I focus on the rods, because they unnerve me, and because they are, in a twisted way, a symbol of some elusive hope. They will hold him up. They will support him. They will be his backbone, now that his God-given backbone has collapsed. They will defy God. They will hold him up, now that God is letting go.

His heart is going, too. They have him on medication, the kind of medication that they give to grown-up men, to men who have had heart attacks, to men who fall like thick trees, clutching their chests, lives flashing before their eyes. He is just a boy, and yet his heart is weakening, slowing, limping under the weight of years that he will never see.

I am trying to not think about that, because there are no rods for the heart.

The thing about the rods is, they represent, right now, everything that we worry we don’t have, everything that we worry we can’t give. Tanner’s body is failing and growing all at once; he becomes heavier and weaker, weaker and heavier, every day, and my sister struggles, alone, to care for him. To lift him is to lift limp bulk. Dead weight. Dead weight. She can’t do it alone. (What if he can’t die at home? — That can’t happen — But what if? — It can’t — What if?) She tries and she tries, but she is no Blue Fairy, she has no magic wand, only her arms and her back and her determination, and she fights with these, she fights through these, to lift her growing dying boy, and she is getting tired.

We are real. Tanner is real. No amount of rods or heart medications or mobility devices can change that, but that means, too, that none of those things will save him.

Being real is precious, but it is sometimes hard to bear.