What Odysseus, Roosevelt, And My Four Year Old Have In Common

Today was Jasper’s first day of school. Pre-K, but still. It counts. Sure, they’re all super tiny and barely able to carry their own backpacks, and they’ll likely not be doing much more than finger-painting and eating glue, but they’re at school. It’s almost heartbreaking, really, the way that their smallness is such that they seem dwarfed by six and seven year olds, and kinder-sized playground equipment. My heart almost broke this morning, anyway. He’s too little! I said to my inner helicopter mom, as I watched Kyle ferry him into the knee-high crowd of pre-Kindergartners. It’s too much!

My inner free-range mom, with whom my inner helicopter mom battles frequently, scoffed at this. Stop worrying. He’s a big boy. He’s an independent boy. He could practically walk here on his own.

Turns out that my inner free range mom was right. Just not, you know, in a good way. Because Jasper did, in fact, decide to walk off on his own.

It made sense to him, apparently. Class was over, everyone was getting packed up to go, the door was right there. So out he went, slipping away in the fray, and making his way toward home. Home is only a few blocks away, but we live in New York City – WE LIVE IN NEW YORK CITY – which is a slightly different proposition than living in the suburbs or somewhere less, you know, New York-y. Not that a four year old wandering off alone in the suburbs would be tremendously preferable, but still. BUT STILL. Off he went, into the wilds of brownstone Brooklyn, all on his four-year-old own.

Kyle, as it happened, was there to pick him up, and Kyle, thankfully, realized – knowing his son – that not spotting Jasper meant that Jasper had bolted. Jasper is not the type of kid that you find hunkered down in a corner, playing quietly with a train or worrying a lovey. Jasper is the type of kid who, if you can’t see him, is almost certainly not only out of your field of vision, but on another field entirely, or five or six blocks away, or somewhere at some other distance, probably hot-wiring a car. (Some other time I may tell you about the Incident At The Honesdale Wal-Mart This Past August, which involved what Wal-Mart security called a ‘Code Adam,’ and which so scarred me that I couldn’t even tweet about it, let alone blog it.) All of which is to say: Kyle knew immediately that Jasper would have left the school grounds, and set off after him, in what he hoped was the right direction, which is to say, the route that goes past the ice cream store.

Jasper, as it happened, had gone in that direction, although by the time he was waiting for the light to change at a major intersection – and here we pause to acknowledge that traffic rules, at least, he is inclined to obey – a kind and concerned and decidedly upstanding grown-up type person had spotted him and noted that it was unusual and very likely problematic for a four year old to be wandering on his own across Brooklyn and decided to intervene. Said grown-up took Jasper to a nearby daycare – please note that I have very mixed feelings about the fact that Jasper went with a stranger – whose staff thereupon called the police, or, rather, were in the process of calling the police when Kyle and one of the teachers rushed in, having spotted, from some blocks away, Jasper’s little blond head turning that particular corner. Relevant identities were confirmed, Jasper was restored to his father, and all was well.

All was well, that is, except for the part where MY HEAD IS STILL EXPLODING.

Where do I even begin with this? Where do I end? My four year old disappeared from his school while under the watch of teachers and attendants and his father. My four old was wandering the streets of Brooklyn alone. My four year old went off with a stranger. My four year old vanished yesterday and I didn’t know about it until after the fact. And here’s the thing: each one of those elements of the story confuses me. They terrify me, sure, but it’s not so cut and dry. It would be easier if it were. If it were all just – all just simply – terrifying, I could calm my pounding heart with a very large drink and a vow to never let Jasper out of my sight again. But it’s more complicated than that. In some respects, I’m glad that I didn’t know until he’d been found and order had been restored to the universe, because otherwise, I might have snapped completely and then quit my job and taken up homeschooling. And the fact that he went off with a stranger – well, that turned out to be the best thing that could have happened, because without such intervention Jasper might have wandered all the way to Williamsburg, which is a horror of its own kind.

And, of course – this, I warn you, is a little twisted – this: the small but bright flame of pride stirring in my chest that Jasper is so bold, so independent, so brave. He was done, he wanted to go home, and so he up and left. Took matters into his own hands, and marched on home. And stopped at all street crossings in the process. I do not, to understate things grossly, want him to do it again, but the fact that he did it, that he’s the kind of child that would do it, that he’s inclined to follow his own lights and make his own path, even if that path leads right out into the streets of one of the biggest cities in the world – a moment while I pause again to calm my pounding heart – is a little pride-making. My little Odysseus might keep me in a state of ongoing anxiety, but isn’t it worth it, a little? He’s only four, and yet he – to borrow from my friend Brene Brown and Theodore Roosevelt – is daring greatly. He is going forward into the world determined to do his own thing, even if that thing seems impossible, even if doing so seems impossible, even if we all would say, no, no you are much too small. 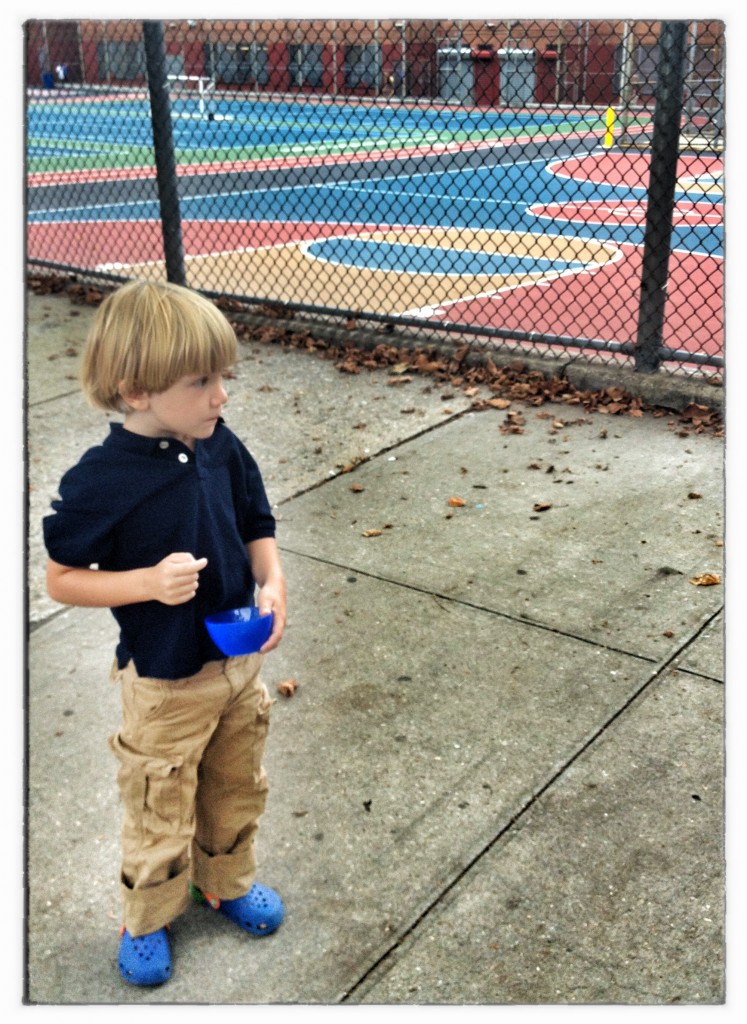 I kind of love that. But I’m also not letting him out of my sight for a few days.