This is fine, of course. I would very much like to be able to vote, but I recognize and appreciate that it is not my right. Voting is a right of citizenship, and I’m a citizen of Canada, so I vote in Canadian elections. I’m also happy to vote in social situations, when everyone’s trying to decide where to go for dinner; I’ve been known to override my children’s votes on those same kinds of questions, because although I believe in democracy, the governmental system of my family is not a democracy, it’s a benevolent dictatorship, and any voting that goes on goes on only with my indulgence. 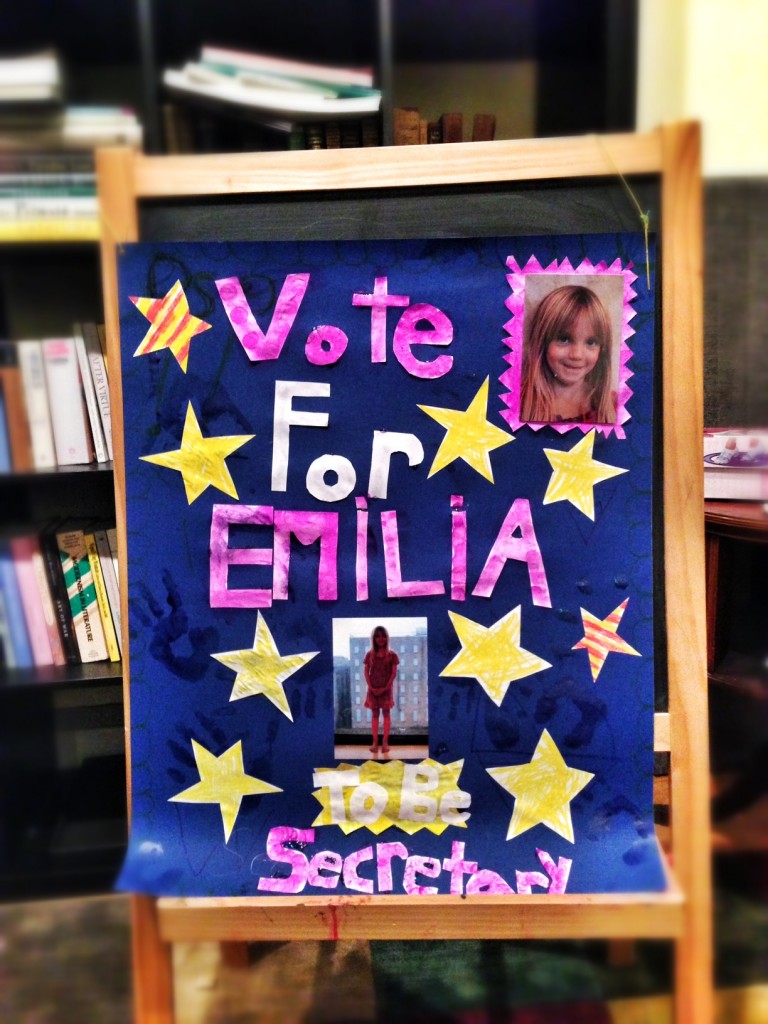 What you can’t see here is her slogan, which required another whole poster, because she needed to include happy face iconography: “A vote for Emilia is a vote for smiles.” Why isn’t Obama using that? EVERYONE LOVES SMILES.

She wants to be Class Secretary because she says, she wants to help. I’m sure that being in charge of the activity area and getting to help take attendance play no small part here, but end of the day I think that she’s summed up, sincerely, what’s in it for her. She gets to help. She gets to contribute. She gets to make a difference in her class. That’s no small thing. And it applies as much to voting as it does to running for office: voting is how we, as citizens, contribute to the work of public decision-making. It’s how we help democratic government run the way that it’s supposed to. It’s how we make democracy robust. It’s how we make a difference. There are many other things that we can do to make a difference, but when it comes to democracy – when it comes to affirming and celebrating and making actual democracy – voting is it. It’s the core. It’s our right – but it’s also our responsibility. It’s how we keep democracy alive.

(And talk about it. *PIN about it. Let’s remind each other of why voting matters. Let’s set aside all of the inevitable grumbling about politicians and politics and partisanship and just talk about democracy. We’re privileged to have it. Let’s not forget that.)

(*Michelle Obama commands it, and she really strong arms, so.)

So Long, And Thanks For All The Bacon