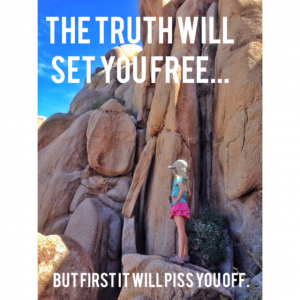 It was right there at the top of my personal inbox this afternoon. A Dropbox file, shared by my friend David Wescott, with this note attached:

As you may know, Gloria Steinem is 80 years old today. I thought it might be nice to share a recording of the conversation you had with her a few years ago. I found it recently when I was cleaning out my hard drive and listened to it. While Ms. Steinem was impressive, I’m more impressed with the success you each have achieved since that call. I am so proud to know all of you and I wish you every happiness and continued success.

The plural ‘all of you’ refers to me and a small group of what would now be considered ‘old school’ mom bloggers. The ‘recording’ is indeed one of a conversation between that small group of us and Ms. Steinem. It took place almost eight years ago, which is to say, forever ago, before public Facebook, before Twitter, before Pinterest, before Buzzfeed. It took place back when mom bloggers numbered in thousands, not millions; back when our only social platforms were the comments sections of each other’s blogs; back when we could only find each other through blogrolls and backlinks and word of mouth. It took place in a time that seems almost immeasurably long ago, in Internet years. It took place in a time that I’m struggling to not feel morosely nostalgic for.

I opened that Dropbox file (there was no Dropbox way back then, in the Internet olden days) and listened to the WAV recording (no WAV recordings, lo those many years ago), and god, it was like being cast back in time. I could practically feel my excitement – our excitement – at getting to chat with Gloria Steinem. Gloria Steinem! This was before any of us had built our quote-unquote businesses; we were, at that time, debating whether what we were doing should even be called ‘business,’ and arguing about whether it would compromise our creative integrity to put Google Ads on our blogs (there was no such thing as a sponsored post; no-one would have been able to tell you the difference between earned and paid media. Content integration? What?). This was before any of us had made a television appearance, before any of us had a YouTube channel, before any of us had keynoted a social media conference (there was only one social media conference – BlogHer – and it was still so young and so small that it had been held around a swimming pool in San Jose. Most of us had met each other there, for the very first time, only a month or so earlier.) This was before any of us had gone to Africa or Haiti, or met Bono.

And yet. And yet. Even though it was early days – the earliest days for this thing that now fuels an entire industry, that drives millions of dollars in business – we knew that what we were doing was important. We knew that we were on the cusp on something. I left an academic career to be on the cusp of this… thing. This movement. This revolution. Which is what it was.

Ms. Steinem agreed with us. I wrote at the time:

And by far the coolest thing that she said was this: that she saw the women (and many of the men) of the blogosphere as being at the forefront of a new kind of revolutionary movement. A movement wherein we really talk to one another, and listen to one another. A movement wherein the highest premium is placed on telling the truth, and deriving inspiration and power from the truth. A movement that we further with every post that we write, with every supportive comment that we leave, with every empowering conversation that we spark and fuel and fan to a blaze… our movement.

She was right, of course. We’d only just begun to acknowledge it at the time. I’ve written about it many times since, usually with curse words. There were many times in those early days when it felt as though the movement, such as it was, was unstoppable, undeniable. We were an intense community, telling our true stories, telling each other that our true stories mattered. Fighting for what we believed in. Fighting each other, some times. Many times, if we’re being honest. (It was only one year later that we filled a room over capacity at BlogHer, raising our voices – really raising our voices – about the ‘State Of The Momosphere’ and whether and how we might be compromising it in the name of commerce. Because the question of whether we were businesses was still not settled, even though we were, by then, some of us, actual businesses. We knew that we wanted – that we deserved – to be considered on a par with professional writers, but we worried that such recognition might come at the cost of our community. It was a reasonable worry.)

This was before Pinterest, before Instagram. Before the Walt Disney Company bought Babble. Before there really was a Babble. The Huffington Post had only just launched; Arianna Huffington was at BlogHer that year, at the edge of that San Jose swimming pool, talking about fearlessness. We already knew that those two things were connected – starting something big always involves fear. We got that, because we too were at the beginning of something big. I think that we all ended up being among the first HuffPo writers that year (you can see my first post – on fearlessness – here). I still have her old business card.

We knew then that we were doing something extraordinary. We had no idea what we would become.

What we are now is an industry, of course. I’m not going to bemoan that – hell, I’ve made a good part of my living on that. I’ve played my part. And for as much as I agree with those who would and do say that in the process of becoming an industry we lost something of our community – because we absolutely did – I also believe that we wanted this, at any cost. We wanted to charge, full bore, full speed, into the public sphere and transform it. We wanted to make change, and we wanted that change recognized. We wanted acknowledgement, and we wanted payment. And we knew that gaining those things would cost us. We worried about it costing us, but we pushed forward anyway, because that’s what a movement is. It’s motion. Ours was us in motion. Is us in motion.

It doesn’t matter that, now, among the millions and millions of mom blogs (and dad blogs) that fill the wide open spaces of the Internet there are countless shill sites and content scrapers. It doesn’t matter that our digital commons is cluttered with quizzes and listicles and that every blogger and her sister knows how to write a Buzzfeed-worthy headline. It doesn’t matter that we have banner ads and sponsored posts and that we hashtag the shit out of everything. It doesn’t matter, because this juggernaut that we created is evidence that we were right, that Gloria Steinem was right, that we were a force that could not be stopped. Yes, much of that force has taken the form of what we might call a Motherhood Industrial Complex, but it still contains the community that was there from the beginning. It still contains the true stories, and the speaking of truth to power. And it not only contains those things – those things drive it.

We are still telling our stories, and our stories are still making all the difference. Rebecca Woolf is still singing my feminism with her words and Liz Gumbinner is still fairly and evenly deconstructing maternal weirdness. Katherine Stone is still shining a light into our darknesses, and Kelly Wickham is still calling bullshit on our racism. Georgia Getz is still Bossy. We are deconstructing bossy. We could not have deconstructed bossy the way that we have over the past weeks had we not created this vast, energized public ladysphere. We fanned that conversation to a blaze that would simply not have been possible even eight years ago, because there wouldn’t have been a public space for that conversation and because there wouldn’t have been a community of this size – this vast, energized public ladysphere of ladies possessed of digital bullhorns – invested and engaged and empowered to deliberate and debate and deconstruct. I have seen, in the last two weeks, more than a few people remark that the Ban Bossy campaign seemed to really only accomplish an end of getting people to talk about Ban Bossy. Well, yes. Exactly. As we used to say, no duh. That was the point: that we talk about it. That’s public discourse. For most of human history, women have only ever had – and then only in the best and rarest cases – very restricted access to meaningful participation in public discourse. One hundred years ago, we could not have had a far-reaching conversation about how we empower or discourage our daughters. Hell, we couldn’t have that conversation ten years ago, not in the way that we’re having today. We have – we have – built and expanded and lifted and expanded again this inclusive public space, and made possible this inclusive public discourse. Us. We did this. We made this. It is huge.

Gloria Steinem saw it coming, way back in 2006. So did we, but, you know, at the time, it really meant something to have her validate it. It still means something. It means no less for Sheryl Sandberg to validate it – and regardless of your opinion on the campaign to #BanBossy, she did exactly that. She validated our movement, by bringing her cause to it, and furthered that movement, by fanning the discursive flames that are its fuel, and its burning hot core. And we all do this, too – we validate and broaden and deepen our movement – every time we participate in the conversation, every time we debate and deliberate and disagree, every time we speak our truth, every time we tell our stories. We made this. We give this life.

And because Gloria said so.

Mommy Blogging For Fun And Profit And Hate Mail