I’ve had a headache for days.

Six days, I think. Maybe seven. I think that it started when Lily’s decline became obvious, when it became clear that we were going to have to say goodbye sooner than we thought. The day after Thanksgiving, when she stopped eating. When we started saying goodbye.

It’s not just about Lily, of course, although it would be alright if it was. She was a deeply embedded part of our lives for over 19 years, a lifetime. It shouldn’t matter that she had four legs instead of two, that she purred and mewed instead of speaking — she was family. We loved her. So we mourn her. I mourn her.

But I also mourn the end of that lifetime, not just the life. It spanned so many life changes; it contained so much living. Her life was a constant across moves and transitions and evolutions, and so her lifetime became a measure. A Lily-time. What share of my own lifetime does that measure represent? A quarter? Less? More?

She was very old, in cat years, when she died. I looked it up — according to one site, she was the equivalent of 92 years old, in human years. I struggle to wrap my head around that. What are human years, anyway? Years are years. She was here for 19 of them, not 92. I knew her for 19 years, and no amount of Internet math is going to make that any longer than it really was. 19 years was a long time. 19 years was not long enough.

Tanner was also 19 when he died earlier this year, and that’s the other piece of this, the other source of the headache. I have not had time to really experience that grief, to acknowledge that pain. There were other things happening, distractions; I was checking messages from the wake (“I won’t be checking my phone,” I told my team. I did it anyway.) I was present when it mattered, I told myself; I was not thinking about work when I kissed his cold forehead, when I delivered the eulogy, when I hugged my sister as his coffin was lowered into the ground. I was there, in the moment. Mostly.

But there were other things happening, challenging things, and I couldn’t be present for that grief for very long. I couldn’t let the headache happen then. There wasn’t time. It wasn’t safe. Ambition’s a bitch who doesn’t give a fuck about your grief. Work was a priority, and work didn’t care.

There wasn’t time; it wasn’t safe.

I call it a headache, and that’s what it is. The pressure behind the eyes, the ache behind the sinuses, spreading across to the ears, pounding dully, the hangover of tears that have already spilled and of tears that haven’t yet been shed. But the real source of the pain is heartache, of course.

Maybe the pain didn’t push its way into my head. Maybe I dragged it there.

I keep trying to push it back into my heart, where it belongs. In the meantime, I take Advil, and a CBD gummy. Maybe two.

What this is all about, really: it’s been a long hard year. A fucking rollercoaster. Extreme highs and extreme lows. Massive transitions. A lot of work on the soul. A lot of exercise of the heart.

The heart is a muscle, I’ve said before. If the soul is a muscle, it’s only a figurative one. I like this idea. The soul, like the heart, is there to be used. If you exercise those muscles, they’ll get sore.

Mine are sore now. It’s understandable.

The night before she died, Lily could barely walk. She would stand, go a few steps, stumble, mew in irritation, then lay down where she was. We’d lift her and put her in one of her favorite spots, near one of us, always. Fetch some water or some food, offer it, squelch the discouragement when she denied it.

She could barely walk, but that night she made the rounds of everyone’s beds. She started with Kyle, who was keeping her by his side in Jasper’s room while Jasper and I huddled, emotional, in the master bed. Sometime in the night she got down from that bed and went to Emilia’s room, and in some manner or another clambered onto her bed, which is forgivingly low (“she was here for a long time, Mommy,” Emilia said, surprised. Lily never went onto her bed, or even into her room, which she considered the domain of the younger, usurper cats.)

At some point, she made her way to the master bed, in which Jasper and I slept. It’s a big bed — we call it, literally, “the big bed” —and even strong human bodies have to lift themselves up onto it, because it’s high and soft, like a bed in a fairy tale. I don’t know when in the night it was that she came to us. I was dreaming, as it happened, of my dad; in my dream, he was at the foot of the bed, walking slowly and quietly as if approaching to kiss me goodnight while I slept, the way he sometimes did when I was child (I would lay very still, pretending to be asleep, because it somehow seemed important that I be asleep, that the moment be his, not mine.) He had his walking stick, in this dream; walking had been painful for him in his later years. I thought, in the fog of dreaming, it’s nice that Dad’s here. I was surprised at the walking stick. He didn’t have it in other dreams.

I woke because something was pushing on my leg. It was Lily, batting my leg with her paw. She was on the bed, somehow, and wanted to lay on my lap, but didn’t have the strength to get herself up onto my legs. I pulled myself up a bit and lifted her onto my lap and patted her, crooning something about love and goodnight and sweet dreams. Goodnight, sweet girl, sweet dreams.

In the morning she couldn’t walk at all, not a single step. I said to Kyle, I don’t know how she got up onto the bed. He said that she must have clawed her way up, somehow, that it must have taken many attempts, but that she had to have to done it somehow.

I checked the mattress and bedding for claw marks, and didn’t find any.

She had to have done it somehow, Kyle said.

I think my dad lifted her up.

I have a book of readings of Rainer Maria Rilke, snippets of his work organized to correspond with days of the year. It was a gift, from whom I forget; that person will forgive me here, I hope. I open it to November 25, the day that Lily died; the entry is one of his poems. Enter Death (I):

We know nothing of this going.

I turn the page to November 26, the day after. Enter Death (II):

When you died there broke across the stage,

Through the gash your leaving made,

A shaft of reality.

This is it, I think. This is why the headache, why the pain migrates to the head, leaving to the heart just a dull throb. Because we’re yanked from unknowing to knowing, because of the collision between those two states. We know nothing of death; we can’t. But it leaves a new kind of awareness in its wake. A brightly lit space, into which thoughts and feelings surge.

(Yes, I looked at other dates. From May 22nd, the day that Tanner died:

Is it not time

to free ourselves from the beloved

Even as we, trembling, endure the loving?

As the arrow endures the bowstring’s tension

So that released it travels farther.

For there is nowhere to remain.)

This, again, is what the headache is about. A surge, an overflow. A gash on the landscape that makes way for a flood.

Did you know: the most common cause of death in the desert is not dehydration, but drowning. The dry desert floor is a maze of open, welcoming paths for water; flash floods start somewhere far away and race through the dry gashes, the sandy washes and the dry riverbeds, catching wanderers unawares. I’ve seen these; they’re a dangerous miracle. One moment the land is dry, barren, the next it holds a raging river. Dry to wet; unknowing to knowing. Sudden, unexpected.

Flash floods are deadly; they change things in an instant. But, but. Things grow in the washes where the floods run, in the gashes their running makes. Life grows there. That’s where you find the green.

The more we love, the tenser the bow pulls, the further the arrow travels. The deeper the horizon, the wider the gash, the fuller the wash, the greener the desert.

The more we tremble, the more we ache, the fuller we live.

Is it not time

But it also about a cat.

I came to the desert because I had a headache.

I came to the desert and walked down to the wash after a rain and waited. No flood came, but that’s okay.

I am standing on the banks of my own flood.

The heartache surges, the headache recedes. 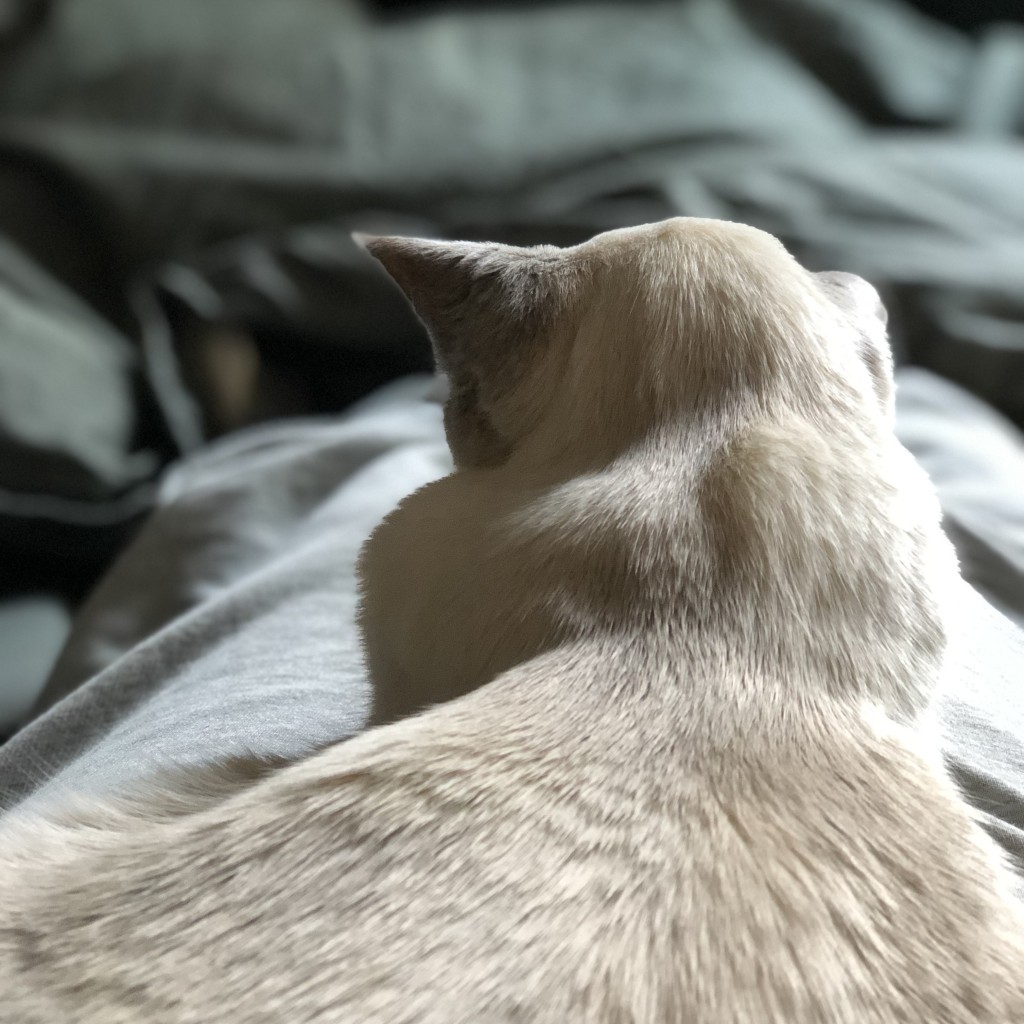