(This post is made possible with support from AARP’s Disrupt Aging.)

I don’t remember my mom being all that concerned about beauty or style when I was growing up. We were a religious family, and a pretty conservative one, in the small-c, suburban Canadian sense. She was a stay at home mom who dedicated herself passionately and whole-heartedly to the art and work of being a homemaker. She loved it, and she was good at it.

And she looked the part. Sensible clothes, sensible shoes, sensible perm (it was the seventies/early eighties), the occasional splurge on Diorissimo perfume. Make-up, when she wore it, was very light (and entirely discouraged for my sister and myself when we hit our really teens. I have a distinct memory of swabbing Vaseline on my eyelashes to mimic the effect of mascara when I was 12, a trick that I probably learned from one of the many do-it-yourself beauty guides that I read – covertly, greedily — in the stacks of our local library.) Carol Brady was gaudy by comparison.

But that, it turned out, was just a phase. When I was in my late teens she and my dad separated, and then divorced; by the time I was fully into young adulthood, she had swallowed her heartbreak, chased it with some cocktails, and emerged transformed. She was done, she said at the time, with being boring. She was ready to shine. And shine she did: she discovered — and embraced — color and glitz and sparkle and flair. Life became one big opportunity to dress up and put on dancing shoes. Life became not just something to live, but to put on lipstick for. And it was going to always be that way. “I am never going to be boring again,” she would tell me. “I am never going to be a housewife again.” She bought the book When I Am Old I Shall Wear Purple and quoted it endlessly. She didn’t see the point in waiting; she wasn’t old yet, but she was going to wear the fuck out of purple if she wanted to.

She did, and it was glorious.

She was, then, close to the age that I am now. I think about her transformation a lot, because it was a transformation. She discovered herself, and started over at an age when some women start settling in. I think about that when I think about whether I have settled in, or about what that might look like. I thought about it really hard not that long ago, when I was deliberating about whether or not to color my hair pink, not because pink hair isn’t something I would ordinarily do (I have done far weirder things to my appearance than pink hair), but because I worried that I was getting too old for it. I thought, what would my mom do?

My mom would, of course, have done anything that made her feel good about herself. For her, there were only two considerations in matters of style or beauty — does it make you look good, and does it make you feel good? — and with those considerations, the latter determines the former. What matters most is that it — pink hair, sequins, false eyelashes, Birkenstocks, whatever — makes you feel good, because without that you aren’t going to look good.

I mentioned it to her on the phone the other day. We were talking about the indignities of aging — “I was shattered,” she told me, “when I had trouble finding my lips to put lipstick on” — and I laughed and laughed as she expressed her outrage at what time and gravity were doing to her body. I laughed, and commiserated. “I was so torn about dying my hair pink,” I said. “I worried that I was too old for it.”

That was a heart punch. She’s the one who made me that brave. If it even was the bravery that mattered.

I wasn’t sure that it was, and I said so. “It’s not a question of bravery,” I said. “It’s only a question of defining beauty however you want. It’s what makes you feel good.”

She laughed. “But those definitions don’t include disappearing lips, and a surplus of chin hair doesn’t make anyone feel good.” I laughed too, but my heart still hurt.

It turns out that, despite our bravado, the weight of cultural expectations about beauty can still press hard upon our spirits, and press harder the older that we get. It’s one thing to speak truth to the power of the beauty industrial complex and assert our own definitions of beauty; it’s quite another to feel supported in those definitions, in a world where women become invisible past a certain age. And we do become invisible, most of us, unless we are among the exceptional ones, the ones who have managed to stay at least close to the light of conventional standards of beauty, or who can afford their own lights.

I rambled on a bit about this, because that’s what I do, even with my mom. She stopped me. It’s more about color, she said. “On the inside I’m a rainbow. On the outside, I’m fog. Inside, a kaleidoscope; outside, grey.”

“Just a sec,” I said. “I’m actually writing that down.” I wrote down, kaleidoscope. I wrote it down because by sharing that word, she helped me get it. The thing that was hard, but also, the thing that revealed a way forward.

The word ‘kaleidoscope’ is an amalgam of three Ancient Greek words: kalos (that which is beautiful); eidos (form or shape), and skopeo (to look or examine). What’s characteristic about a kaleidoscope is that it disrupts the very perception of a beautiful form and reshapes it — and reshape it again and again — into something unexpected. Into something that itself disrupts what we think of, conventionally, as a symmetrical beautiful form.

The fog, of course, comes from the culture. It’s hard to fight it, it seems, with anything other than direct light. But my mom’s kaleidoscope is something different than light. It disrupts light. It uses light to break the fixed symmetry of conventional beauty and shatters it into infinite patterns of color and light. It’s her unique, unpredictable, amazing her-ness. And it just requires a twist of the lens.

We all have our kaleidoscopes. And we can all twist the lenses, and see our infinite patterns of beauty, our exploded symmetries, our boundless color, our limitless light.

Mom and I linked pinkies and (re)committed to doing that. To color and sparkle and glitter and all manner of reflected and refracted light. To our own definitions of age and beauty and style. To being ourselves.

We can all do that.

It doesn’t have to start with pink hair, but it could. 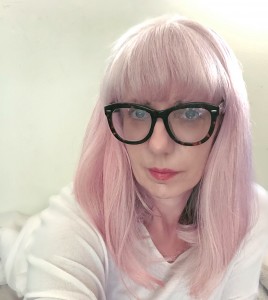 Thank you, Mom. For the bravery, and for the kaleidoscope.

Have Shoes, Will Happy