*Edited below. I know; this is becoming a bad habit. But I am, after all, a Bad Mother, and I come as advertised…

In the frenzy of all the recent blogtardage, it was suggested to me that you can know that you’ve made it as a blogger when someone starts their own blog because of you and devotes part of that blog to talking about you. (And that’s my last word on it. The topic of blogtards and their exploits is officially over. And no, no linkage. Ov-aaah.)

Maybe that’s making it. Or not.

Maybe it was just your bad luck that week to have attracted the most attention-hungry blogtard. Could happen to anyone.

Better measures of ‘making it’ in the blogosphere are to have your own entry in Urban Dictionary, to be named the Mom-Blog Round-Up Queen of Everything, to be paid to blog, or to be named an honorary Mommyblogger. (So if anyone is looking for the real High Priestesses of the KoolAid cult, look to these eminent figures. I’m way down the ladder. Waaaay down. Don’t even know the secret handshake.)

(Is there a handshake?) 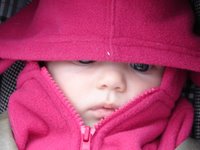 So, despite what you may have heard, you won’t find any blog’n’roll superstars here. Sorry. The blogosphere Star Maps are notoriously unreliable. This is home to WonderBaby, Future Ruler of the Known and Unknown Universe, aka Imperial Leader. If you’re looking for Amalah, Queen of Everything Including All Media Not Controlled By Dooce, you’re in the wrong ‘hood. The absence of security guards, paparazzi and screaming fans should have tipped you off.

But before you walk away, angrily stuffing that virtual Star Map back into your virtual fanny pack, lookie here.

We have a t-shirt. WE HAVE A T-SHIRT. 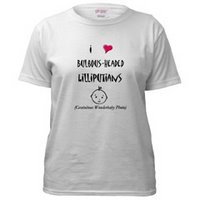 So we’re not entirely lacking in glitter and stardust chez Bad Mother. Some of the coolest chicks in the blogosphere thought that we were cool enough to warrant a t-shirt and lo and behold! A t-shirt there is! Immortalized in Cafe Press!

**Just to be clear… this t-shirt – the Her Bad Mother Tee – is the work of Christina and Kristen and all credit is due to them. It can be acquired from Christina’s CafePress shop, here. For the inspiration for the tee, see here.

Now when people ask you if you’ve been to Her Bad Mother’s blog, you can be all cool and nonchalant and toss your hair (if you have any left after post-partum shedding and grabby baby depilation) and say, oh, yeah, been there, done that, GOT THE T-SHIRT.

(What really tells you that you’ve made it, in the ways that matter most? The nicest, smartest, funniest bloggers in the blogosphere visit you and read your blog. That’s making it.)

My husband just walked in and asked what I was doing.

Him: Are you blogging about how great it is to have sex with your husband?

You asked for that, dude. Sorry. But consider yourself lucky: if I were really to blog about our sex life you KNOW that your testicles would shrivel from the embarassment. It would be flattering, of course, and perhaps you would go down in history with the same kind of sexual fame that Kirstie Alley’s second husband, the Hardy Boy, no pun intended, attained. But dude? My mother and my sister and your sister and sometimes – gah – your mother and some of your colleagues and most of our friends and have I mentioned your mother? read this blog. So have I explained enough about the testicle-shrivelling embarassment that would attend the sex talk?

WonderBaby has a new hat: 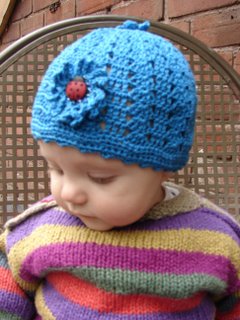 New hat courtesy of the Nana. We love the Nana.

In honour of Mrs. Fortune and her Brand New Cookie** 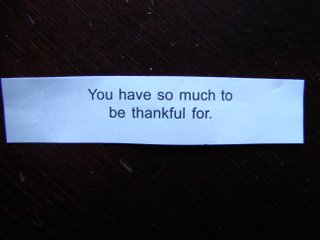 **WonderBaby’s open letter to new blogger babies, originally composed for Boy Wonder, child of Urban_Mommy, should now also be read, with necessary modifications to the address, as an open letter to Jacob Paul. (This is a little bit Elton John of me, I know. But it’s good!) WonderBaby welcomes you to her empire, Jacob Paul! Go forward and dominate!