This Blog Needs an Enema

Or at least a good bran muffin.

This blog has never been regular. It doesn’t always move every day, but its movements are always long – sometimes so interminably long as to be, ahem, runny – and robust. So after living for so long with blogorrhea, it was discomfiting – to say the least – to suddenly be struck with a severe case of blogstipation.

I’m not sure what bunged it up. The heat, the sick, the lack of sleep, the frustration with blogging induced by a confusing comment tussle – all, I think, undermined my usual healthy, fibre-rich blog regimen. And by the end of the week the small hard posts stopped coming. (And, as a consequence, I stopped venturing out for visits, and managed only the feeblest of occasional waves from my virtual front window. For this I apologize. If you haven’t heard from me in a while, know that it is entirely due to the gastro-blogtestinal distress that I am currently experiencing.)

I’m still struggling with this. But I’m going to keep pushing away. Something’s gotta give eventually, right? And in any case, I want to keep a record of everything that’s going in – all the things that demand passage into posts – the better to ensure that most of them come out.

So, herewith, HBM’s recent diet of mental and emotional consumables that are awaiting passage pending laxative:

1) Milestones! But not your good old BabyCenter developmental marker milestones (sure, I could blog about how the Future Ruler of the Known and Unknown Universe has moved from standing and cruising to balancing and climbing – prison-breaking, effectively, as she masters hoisting herself up and over the baby gates – but these are coming so fast as to defy meaningful posting. And besides, they frighten me – they represent the very real possibility that my baby will very quickly overtake me and defeat me entirely – and I haven’t yet worked out how to process that fear.) No, the Milestone of the Week is much more in keeping with the scatological vein of this post: Baby’s First Dump in the Tub! 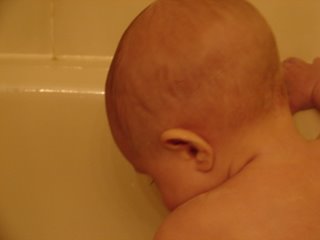 Eight months on this Earth and WonderBaby had never even had so much as a little tinkle spill on the change table. We had never actually seen her produce a poo. We might have – if we were more fanciful people, and if it weren’t for the robust farts and occasional grunting that accompanied the bigger deposits – imagined that little poo fairies came in the night and during naps to deliver custom-made fairy shits to WonderBaby’s wee diaper.

If we had imagined such a thing, that fantasy came to a shocking end on Saturday evening, when WonderBaby let loose in the tub. It was a dump and it. was. spectacular. Or, at least, that’s what the Husband tells me. He witnessed it, he cleaned it up. For which, it must be said, he rocks, even more than usual.

This is Her Bad Mother’s Husband, aka Her Awesome Husband (ed. note HBM takes no responsibiity for the acronym). I am, as my name suggests, awesome, and I welcome your positive comments.

Cleary, I need to get on that post, before his fragile ego is irrevocaby destroyed. 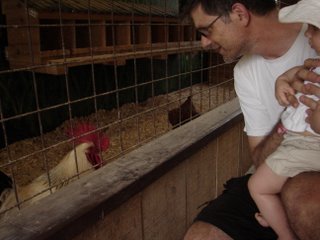 No, the Husband is not threatened by this rooster. But he still felt it necessary to enter into a little cock-a-doodle-doo-off in the barn. Cockcomb envy, maybe.

3) The effect of the heat on my will to breastfeed. Sweaty baby clamped to sweaty tit, sucking fluids from my dessicated, wilting body. Need I say more? 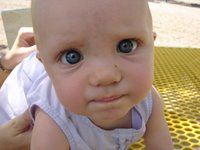 4) Further to breastfeeding – how to get WonderBaby more comfortable with bottles before BlogHer.

5) Further to BlogHer – how to get me more comfortable with self, and with liquor, before BlogHer.

6) Further to issues concerning my comfort and the comfort of my family – whether or not to seriously consider moving to a bigger, more comfortable home outside of the city. Which is to say – gasp – leave the city. And become exurbanites. Commuting exurbanites, ack. (Better than commuting suburbanites, but still.) Which means, of course, that we would never see the inside of a museum or art gallery again. Would we trade the buzz and hum and culture of the city, trade our tiny, dusty, 120 year old house in an up-and-coming neighbourhood that is nonetheless overrun by roaming gangs of Portuguese youth who roll each other for BBQ chickens for a house with a finished basement with family room and big treed yard and full laundry? Near a lake?

Did I mention how hard it is to rid a house of 120 year old dust? And did I say about the gang-bangs provoked by BBQ chickens?

7) Further in the category of things that are messed up: Where’s Suri? Over three months since the purported birth of the TomKitten – the off-spring of the emphatically heterosexual Scientologist and publicity-whore Tom Cruise and some chick who surrendered her identity and free will for the greater purpose of bearing, or pretending to bear, said offspring – and still no verifiable sighting of the child.

The obvious answer is, of course, that there is no baby. They may still be awaiting delivery of the black-market baby that will be passed off as the natural product of Mission Impossible Sperm. But there are other possibilities: if the child is, as widely rumoured, an alien, then it may take some months before she acclimates to the Earth’s atmosphere.

However, it is equally likely that the TomKitten is the human vessel of a rare bloodline that can be traced back to Jesus Christ. Scientologists, then, are latter-day Templars charged with protecting this extraordinary legacy and that they are currently battling a vast Roman Catholic conspiracy to destroy all evidence of this legacy. This theory does not presuppose that Tom Cruise or Katie Holmes share such divine lineage (heavens forbid); rather, that Tom Cruise beat Bill Gates in a secret auction for genetic material stolen from the last of the Merovingians and consulted with Michael Crichton and various genetic scientists on the best methods of creating a human child out of this material. The result of these efforts is Suri, the Holy Grail test-tube miracle baby, who is now being held in a top secret bunker near Rennes-le-Chateau in France, the better to protect her against Opus Dei-funded bounty hunters.

But that’s just my guess. Your thoughts? 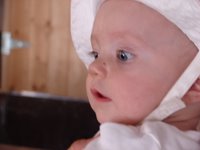 My guess is Area 51 alien breeding program, hijacked by Scientologists, but that’s just me.

There. If anything’s gonna clear the pipes, it’ll be the monstrous hybrid of TomKat gossip and Da Vinci Code psycho-babble.

There’s a new guest in the Basement. Go, keep her company, hear her story, and have some cookies…