by Catherine
Uncategorized
Share
Edit: More links added below!
I’ve been promising this for a while: a smackdown post wherein I drag Caitlin Flanagan and Linda Hirshman into my bloggy ring and bash some heads together. Problem was, every time that I started putting my thoughts to screen, I’d get mad and start ranting. No matter what corner I started from, I’d end up shrieking HI-yaah! and flinging myself footlong, Miss Piggy-style, at my antagonists. And then screaming and clawing and pulling hair.

That is, I would have done. Except that my opponents weren’t really there and it was just me cursing at the page.

So I needed to retreat to the corner and calm down.

And I needed to figure out just what was making me so mad.

The obvious source of frustration for me is, of course, my disagreement with their respective positions. I’ve already addressed Caitlin Flanagan’s argument that it is simply best that, where possible, mothers stay at home with their children and have stated that I think that it is, for the most part, bunk. And there’s much that I could say, and someday will say, about my thoughts on Linda Hirshman’s argument that life in the home is not particularly conducive to human flourishing and that women should, therefore, reject any assignment to the home. I want to say more about it someday – soon, I hope – because the question of whether and how women, and especially mothers, contribute to public life, and so whether and how they flourish, is central to my academic work. And although I am merely a flea in the academic microcosmos that Hirshman inhabits, I’m a pretty fucking ballsy flea and am pretty comfortable stating that she is, in my own academic opinion, wrong.

(And, how many opportunities to I get to pretend that my years and years of – in Hirshman’s estimation – useless study in the field of political philosophy might qualify me to contribute to a public debate? Mama-blogging isn’t just about keeping track of shits and spits, you know. It’s mah soap-box.)

But I’m going to save that for later. ‘Cuz that’s a long post and a pedantic one and I haven’t been sleeping because WonderBaby hasn’t been sleeping blah blah blah and it would probably just degenerate into another rant about gods and penises. And in any case, I’m more interested, for the moment, in figuring out why this all makes me so angry.

It’s not just that I disagree with Flanagan and Hirshman. I’ve spent enough years in undergraduate and graduate seminars reading crap theories about crap nonsense – including plenty of crap-assed feminist and post-feminist and I-ain’t-no-feminist theories that only ever amount to so much useless gynobabble – to be really bothered by one or two more dumps in the bowl.

What’s bugging me – and here I am not going to win any awards for originality – is that women, women, like Flanagan and Hirshman continue to force the dynamic of disagreement among women and insist that that disagreement is grounds for war. They demand that we choose sides, even as they insist that we are not within our maternal and/or feminist rights to freely choose our lives. If you wish to be a true mother, a truly good mother, says Flanagan, then you have no choice: you must stay at home. If you are a true feminist, a truly good feminist, says Hirshman, then you have no choice: you must not stay at home.

Pick your side. You’re either for us or against us.

Flanagan and Hirshman have been holding opposing fronts in the so-called Mommy Wars, dictating hard lines from their respective sides. And I hate hard lines. I’m not interested in either of these women telling me or any other mother what is best for us as mothers and/or as women. I didn’t sign up for this war, I don’t support this war. Don’t ask me to

‘Cause I don’t know what side I’m on. More to the point: I don’t want to have to choose a side. I’m not comfortable with the absolutist character of either of these sides.

But I want to be clear: this isn’t a cry for unfettered freedom of choice. I do think that the single greatest contribution of feminism to the lives of women in the West has been the propagation of the principle of choice, for women, as an ideal. But the resolution of the Mommy Wars is not going to come about through a simple affirmation of the principle of choice. The Mommy Wars continue, I think, because we are reluctant to whole-heartedly embrace the idea that one side is as good as the other – or to reject the idea that there may in fact be one right way.

The notion that there may be ‘one right way’ – to live, to believe – is a tremendously compelling one. It has fuelled and sustained empires and religions and civilizations. It promises to simplify things, to make life clearer. And there is, I think, no life that so provokes the desire for clarity – for salvation through clarity – than that of a mother (and perhaps that of parents more generally.) And I think that there is no state of being (human being) that so stimulates the desire for truth as the state of being a parent. We want to know what is truly best for our children, what is right. And I think that most of us believe, or at least suspect, that when it comes to parenting, to protecting and nurturing children, not all choices are equal. We know that there is such a thing as bad parenting. We know that there is such a thing as neglect. We know that some children – many children – turn into unkind, unpleasant, inconsiderate, nasty adults. There is a wrong way.

And because we love our children, we want to know what the wrong way is, so that we can avoid it. And if there is a clearly marked right way, we want to know that, too. And if someone with a degree or a publishing contract comes out and says publicly that the path we’ve chosen is the right one, we cheer. If they say it’s the wrong one, we get nervous. Or mad. And we fight.

And so the War continues. And will continue, I think, until we are prepared to admit two things. One: that there are right ways and wrong ways, good choices and bad choices, and that a simple affirmation of choice qua choice is not enough to allow us to identify the good and avoid the bad. Two: that the correct path is not going to look the same for every woman, mother, father and family.

I don’t know what the right way is. I do know that there is more than one right way. And I know – and I’m comfortable making a knowledge claim on this – that whatever maximizes the stock of love in our families is what best points us in the direction of the ‘right way.’ That’s not going to look the same in every family, but it boils down to the same things: love and care and respect – for our children and our partners and ourselves – and love love love. Everything else is so much detail, so much window dressing, so much she said/she said.

That’s what I say, anyway. Bad Mother out. 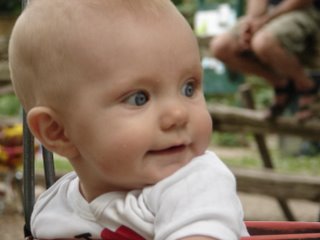 I told her to say all that.

For further reading: check out what Mo-Wo, L., Sheryl, Christina (in her July exchange post over at Cape Buffalo) and TOMama (at Literary Mama) had to say on this subject.

And – more links! – check out what Kittenpie said about the whole Mommy War thing back in March, BubandPie’s take on Hirshman here, Toyfoto’s recent thoughts here, and what MotherGooseMouse had to say. And Laural Dawn wrote this after reading my words. Also check out what Beanie Baby had to say, and Moonstruck Mama, and Veronica at Toddled Dredge.