The Lovely Mrs. Davis has told me what to write about today, and so any complaints about further pre-emption of regularly scheduled HBM programming should be directed to her.

But it’s such a worthy subject: Sesame Street kicks off its 37th season today! And to celebrate, I must wax nostalgic about my favorite childhood televisions programs… Which is easy, because, for me, there were really only two.

(This is, um, sort of a lie. I loved Zoom, and The Electric Company, and The Banana Splits, and Little House on the Prairie and – Canadians will get this – Mr. Dress-Up. But you wouldn’t want this post to get out of hand, now, would you…?)

I loved Sesame Street. I loved Big Bird, and the Snufflupagus. I loved Ernie and Bert. I loved the Count. I loved Oscar the Grouch. I loved Cookie Monster. And, of course, I loved Grover. Sweet, friendly, lovable old Grover.

I wrote about Grover a while back. I wrote about how a Little Golden Book featuring Grover stands out for me as one the more important books of my childhood. This is part of what I said about that book, The Monster at the End of This Book:

Grover was familiar and safe and comforting (in a way that the Cookie Monster, for example, was not. I always suspected that the Cookie Monster could turn on a kid at any time, revert to his monster-ish, Mr-Muppet-Hyde dark side while in the grip of a bad cookie trip.) Grover did not seem a monster: he was a sweet old furry blue uncle, very possibly with bad breath, but certainly generous with the hugs.

The book gripped me with the revelatory reminder that he 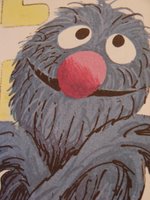 was, indeed, a monster. It also, of course, gripped me with its narrative suspense. I think that this book was a wonderful introduction, for a very young reader, to the thrill of the page, to the incomparable magic carpet ride – destination unknown or anticipated or delightfully feared – that is a good story. And it demonstrated amply that a good story can boil down to just a few simple, well-directed and well-constructed lines. It was all of these things. But it was mostly the thrill of being reminded that “Grover’s a monster I’m supposed to be afraid of monsters but I’m not afraid of Grover the monster” that kept me pestering my parents to sit down and read this book with me.

Roland Barthes argued that there is pleasure in narrative suspense – the “gradual unveiling” of a story – but that this pleasure is not the true pleasure of the text. The text of pleasure, he says, submits to and offers comfortable reading; the text of bliss, on the other hand, discomfits. It unsettles the reader’s assumptions, “brings to a crisis his relation with language.”

These words address the nature and character of the book, and of reading, but for me they also capture something of the magic of certain television programs and movies. They certainly, in my opinion, capture the magic of Sesame Street and its edgier cousin, The Muppet Show.

Sesame Street grabbed the attention and gripped the imagination of children (I’m using the past tense here because I have only my own childish experience of the Sesame Street of the late ’70s to go on; I can’t speak to the magic or lack thereof that attends Sesame Street in its 37th season). It grabbed attention and gripped imagination because it walked, steadily, perfectly, the childish tightrope between the expected and the unexpected. Animals that speak and monsters living in garbage cans do not surprise children. Giant talking birds who have giant fuzzy elephantine friends that may or may not be imaginary do surprise children, and delight them. As do monsters who love cookies and monsters who are a little bit shy and who like hugs and grown-ups who see and hear and love such monsters. Talking animals aren’t surprising, monsters aren’t surprising: it’s the unexpected details (details that are at once fanastic and banal) that unsettle – thrillingly – childrens’ assumptions and so provoke delight.

The Muppet Show, which still delights me, pushed the envelope of the unexpected – of ‘unsettling (viewers) assumptions,’ and of ‘bringing to a crisis (their) relation with language’ and image and narrative – to another level entirely. In the Muppet Show we see the same agglomeration of walking/talking/dancing/singing animals and monsters as we do on Sesame Street, but these are not the (mostly) child-like creatures of Sesame Street, and nor are their relationships defined by the simple junior politics of the schoolyard/neighborhood. The Muppet gang is a rag-tag band of ne’er-do-well performers and hangers-

on and wannabes who strut and fret their full-grown-human-style neuroses and anxieties and issues and agendas upon a surrealistic stage before a largely disapproving crowd.

When a sinister-looking monster lurks in the corner of the set while Gonzo’s chickens disappear, we discover very quickly that, yes, as we should expect, the monster has eaten the chickens. And this is what we should expect – this is life. Bad things happen to good chickens. But this element of the Muppet Show packs the same whallop of surprise that comes with Sesame Street’s unexpectedly sweet and playful and co-operative monsters: we don’t expect Muppet monsters to be nasty (and, indeed, they’re not – they’re just hungry), we expect them to be like Grover, or, at worst, just grouchy like Oscar. In the world of Muppets, which is really only down the road a ways from Sesame Street, where frogs run theaters and pigs develop crushes on frogs and bears do stand-up comedy (badly) and a tripped-out band of puppets keeps a monster chained to a drum-set, we expect playfulness. We, who have learned to play and count and hug and be nice to other people even when they don’t look like us (one of these kids is not like the other!) from the denizens of Sesame Street, expect harmless fun in Kermie and Piggy’s playhouse.

But we discover there – and here is where we are brought ‘into crisis,’ blissfully, happily, with our relationship to story – that play evolves. We discover that play can become all the more exciting when fear and discomfort are re-introduced. It is lovely and heart-warming that Grover is a sweet monster who only wants hugs, and as children we are delighted by the surprise of his unexpectedly sweet monsterness. But as we grow a little, sweet monsters remain only that – sweet monsters – and the lesson of the sweet monster (don’t judge a book by its cover, love friends for their hearts, not their appearance, etc. etc.) gets – dare I say it – stale.

As does the thrill of cozying up to a monster. What the Muppets bring to the playground: the scary monster, who is hungry and who lacks impulse control but who is nonetheless ready to play. Sweetums brings excitement back to play by bringing danger back to play. And, he reminds us that the sweet lessons of Sesame Street (love your neighbor!) must always be tempered with caution (make certain that your neighbor does not want to eat you!). Or, in the case of Animal, beat you about the head with his drumsticks.

As an adult, I’m tempted to insist that The Muppet Show is really a show for adults. But I loved it as a child, and I can keenly recall loving the scarier monsters and the bad temper of Piggy and the recurring accidents and the borderline violence of puppets flinging, kicking and/or pummeling other puppets (and in some cases, real grown-up Guest Stars doing same.) It was a childish, surreal representation of the world of adults that allowed me laugh at that world while at the same time both yearning for it and dreading it.

It was genius. Still is. 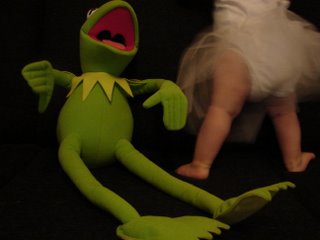 The It’s Not Easy Being Green Dancers had hoped to have completed choreography and rehearsal on their epic revision of Swan Lake, “Frog Lake,” but, alas, the corps-des-tadpoles walked out (er, flopped out) after learning that the pointe-shoes would not be customized to accommodate their tails…

So, a question (and yes, this takes us away from Mrs. Davis’ assignment): what childrens’ programs, movies or books do you think are perhaps best appreciated by adults? And – what quote-unquote adult-oriented material – if any – is perhaps better appreciated by children? (Can you even think of any, other than movies made by SNL alum?)