Edited below. Because I wasn’t done when I hit publish.

Number One thing NOT to do in New York: blog.

I caught myself yesterday morning, while I was sitting in a Starbucks in Brooklyn, ‘round the 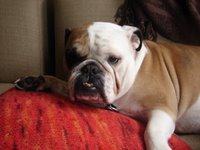 corner from Liz’s place, fingers hovering over the keyboard, all a-tingle at the prospect of blogging about the previous evening’s events. I’d hustled over there, leaving Liz to catch up on real-life work, thinking that it was absolutely necessary that I write a post. I hadn’t posted since Monday, after all, and there was all that exciting Greenstone Media launch stuff to blog about, not to mention gushing about Liz and Nate and Thalia and their adorable dog and demonic cat. How could I not blog? 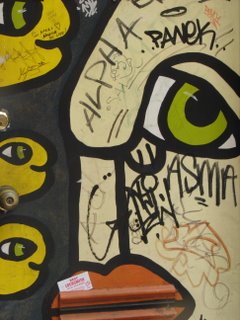 Well, I couldn’t. I couldn’t blog. Because it occurred to me in that moment that there were umpteen better things to do with one’s time when one has only one day to one’s self in New York City. So I left the Starbucks, abandoned my laptop at Liz’s apartment and went off to amuse myself.

Which, translated into an afternoon in New York, means the following: doing a happy dance in Argosy Books upon finding an illustrated children’s book set of Wagner’s entire Ring cycle, published in 1939 by the Metropolitan Opera Company; searching unsuccessfully for my favorite-but-now-discontinued peony-infused bath oil at Takashimaya but discovering that the violet oil is even lovelier; wandering down Hudson Street from 14th and then over to Bleeker and then down into Soho to see Michel Gondry’s exhibit at Dietch Gallery; going to Pearl River Mart and buying WonderBaby a onesie with ‘I Heart NY’ printed on it in Mandarin; and then heading back to Brooklyn to hang with Liz and eat pizza and watch My Super Sweet Sixteen and Laguna Beach.

And that last bit? The hanging out bit? That was the best part. 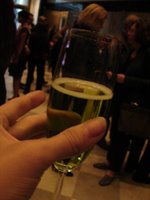 There was a lot to be excited about on this trip. Not least was the launch of Greenstone Media, to which Liz and I were not only invited guests, but invited guests who had their names highlighted in pink on the guest list. Invited guests to whom lovely organizer-type women said things like, oh we must get pictures of you with Gloria. Invited guests who slurped green champagne while chatting amiably with Mo Gaffney and Dee Snider and Emme The Plus-Sized Model and staring at the back of Jane Fonda’s head.

Invited guests who only slobbered a very little bit while talking with the incomparable Gloria Steinem, who is absolutely engaging and inspiring and gorgeous. (Seriously. She’s, like, 72 and her un-Botoxed, un-lifted self is better looking than most women a third her age. Let that be a lesson to us all: brains and integrity and passion are the source of all kinds of hotness.)

It was fun (Liz captures this much more effectively in her recap, here.) It was wonderful. But it wasn’t the highlight of the trip. 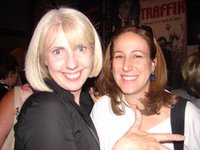 The highlight was hanging with Liz. Gloria was, as always, inspiring, and it was thrilling to speak with her (stay tuned), but it was just as – perhaps more – inspiring and rewarding to just hang out and talk with Liz for a couple of days. We talked about everything from motherhood (surprise) to food to politics to MTV to blogging to feminism and beyond. It was, like, Our Super Sweet Hanging Out Thing.

It might not have been MTV fodder. It probably wasn’t even Greenstone fodder. It certainly provided a lot of food for thought that will, probably, eventually, be blogged (we discussed at length whether our generation or our daughters’ generations will see the likes of Gloria Steinem and I’m going to obsess over this question for EVER), but that wasn’t the point.

It was better, even, than Gloria Steinem. It was better than Gloria because it exemplified both her current mission and the best of the legacy of contemporary feminism. When women have ample space to talk and to air their passions and their ideas in open spaces, they find each other and they empower each and they inspire each other. I’ve written about this before; you know the schtick.

It’s good schtick. And it’s even better in person, with pizza and an hour or two of MTV reality-programming. 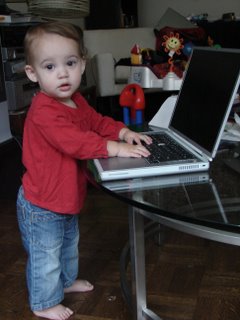 … and a WonderBaby soul-sistah, Brooklyn-style…

The Great Gloria Steinem Blogger Interview is up at Greenstone, if you’re interested. Keep in mind that we were all nervously clutching our telephones in sweaty hands and that some of us (I’m not naming names) were desperately shushing fussy babies. But it’s fun, and if you like listening to awestruck women struggle to remain coherent in the presence of celebrity that has nothing to do with Billboard charts or People’s Sexiest Men Alive, then knock yourselves out.

Gloria Steinem’s response to The Questions are probably going to take a few days, so I’ll be doing the action post round-up early, probably this weekend, after catching up on some blog-cruising… (I’m behind on everything – blog visits, link updates, everything – and am feeling great messy waves of guilt related to neglect of blog and putative neglect of child, so bear with me.)

EDITS – woo hoo! Need more to read? You can find me waxing pissy about recent, recurring debates on blog politics here; you could go check out the Basement, ‘cuz I know that you haven’t done that in a while; or, you could check out Kristen’s efforts to help out another mom by holding a super-awesome contest here.