Because Monday was a holiday and yesterday I had a bad case of the existential fuzzies.

So, back in July, I (despite my best efforts to the contrary) was pondering the whereabouts of Baby Suri…

The obvious answer is (I said) that there is no baby. They may still be awaiting delivery of the black-market baby that will be passed off as the natural product of Mission Impossible Sperm…

However, it is equally likely that the TomKitten is the human vessel of a rare bloodline that can be traced back to Jesus Christ. Scientologists, then, are latter-day Templars charged with protecting this extraordinary legacy and that they are currently battling a vast Roman Catholic conspiracy to destroy all evidence of this legacy. This theory does not presuppose that Tom Cruise or Katie Holmes share such divine lineage (heavens forbid); rather, that Tom Cruise beat Bill Gates in a secret auction for genetic material stolen from the last of the Merovingians, and consulted with Michael Crichton and various genetic scientists on the best methods of creating a human child out of this material. The result of these efforts is Suri, the Holy Grail test-tube miracle baby, who is now being held in a top secret bunker near Rennes-le-Chateau in France, the better to protect her against Opus Dei-funded bounty hunters.

Well, the truth can now be told. It turns out that Graydon Carter has had Suri all this time, hidden away in a secret nursery in the New York offices of Vanity Fair.

Which means, of course, that the reason for her sequester likely has less to do with genetic experiments and religious conspiracies and more with such high-stakes projects as Humanizing Insane Celebrity Cultists for the Masses (or, HICC’M: aka Operation TomDad.)

I have to admit that I’m a little disappointed.

(She’s cute, though. And clearly the product of two very hairy people, which leads me to believe that whatever Mr. Cruise might say about his heterosexuality, he’s certainly been making heavy use of the body wax. I won’t speculate about Mrs. Cruise.)

(Full disclosure: I am suspicious of babies with great quantities of hair. Where do these babies get this hair? Why does my baby have so little hair? I may be a little bitter about this. But I’m a wee bit tired of being asked whether I shave WonderBaby’s head.)

(OK, I’ve only been asked that twice. But still. Please.) 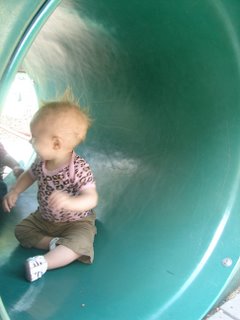 WonderBaby Beauty Tip #73: Mohawks give the illusion of more hair.

(Mullets do not. Do not be sucked in by this evil myth.)

2) Actually, there is no #2. Nor is there a real #3, #4, or #5, but you probably guessed that seconds ago. Which means that today’s post shouldn’t really be referred to as a Miscellany. What this post is, in point of fact, is a post about Tom Cruise and Baby Suri, but I was trying to avoid admitting to myself that I have devoted the greater part of a post (when I am so backed up on my to-do list, for shame) to Tom Cruise.

3) I haven’t devoted this post to Tom Cruise and his offspring because Tom Cruise interests me. Hell, no. I did it for the Google hits.

4) Actually, I did it because I am procrastinating on posting my piece on babies and eros. My two pieces on babies and eros (because although I claimed that I believed this topic to be unbloggable, I have actually found it difficult – nay, impossible – to stop writing about it) which are still messy in form and a touch on the raw side and I haven’t quite come to terms with posting them as-is. Which means – yay! – more editing.

5) I also did it because I am completely preoccupied by three things: that I begin teaching again next week, that I will be heading to New York immediately after my first lecture next week, and that tomorrow I will be SPEAKING ON THE PHONE WITH GLORIA STEINEM.

And now I will leave you hanging for the details.

Because I’m bad that way, and because you all need to be punished for being so attentive to a post on Tom Cruise.