Love pedantry? Try this on for size!

(… if not, just skip to the miscellany and gratuitous WonderBaby photo at the end. It’s okay. I’ll understand.)

“The Public Mother: Motherhood and Citizenship in Political Thought”
Jean-Jacques Rousseau’s ‘Emile; Or, On Education’ was the first work of modern political philosophy to examine the raising of children as a fundamentally political exercise. However, although Rousseau argues in the Emile that the work of mothers serves an important political end – the creation of good citizens – he, like most other political philosophers ancient and modern, nevertheless regards this work, and the lives of mothers generally, as essentially private. Mothers, according to Rousseau, make the greatest contribution to public life in bearing and raising children, but making this public contribution seems to require that they remain outside of the public sphere.

This paper will consider how these arguments, and those of other ancient and modern political philosophers, have shaped our understanding of motherhood and the role of mothers in the public sphere. Does good citizenship require good motherhood? Does good motherhood require a retreat – in whole or in part – from public life? Can good motherhood and good citizenship be squared differently: can public mothering (for example, participating in public discourse about mothering, by involvement in traditional public spheres such as politics, or by writing or creating art about mothering) create a bridge between the exigencies of the home as the nurturing-place of citizens and the exigencies of lived citizenship in a public sphere? And, finally, can the arguments of canonical political philosophers help women navigate contemporary debates (per Hirshman, Flanagan, et. al.) over the impact of women’s choices concerning work and family on the family and community?

Bored yet? No? Really?

Okay then. If the above doesn’t bore you silly, then you might be interested in this: I’m presenting a paper – that prattle pasted above is the abstract for said paper – at the Motherlode conference this Friday. It’s extension of my formal academic work on women and mothers in the history of political philosophy – omg YAWN – and although the abstract probably sounds all stuffy and academonically pretenshus and all, I’m actually thinking that it will be kinda fun. And! I’ll be dragging blogging into the discussion! Where I say ‘participating in public discourse about motherhood’? ‘writing or creating art about mothering’? That is, among other things, academic code for blogging. So this is where I really get to play around with confusing the boundaries of my own private and public activities. Could be interesting. Could be, like, totally, self-referentially post-modern. Could be mind-freezingly, butt-numbingly boring, but I doubt that. I’ll make some jokes, and will very possibly interrupt my own academic blather with some mild cursing, to make sure.

I’m thinking about posting some or all of my presentation – the whole paper would probably numb your brain unnecessarily – on Friday (meta! meta!), but I haven’t decided yet. It might be too much boundary-blurring for one week, a week in which I will also be lecturing to undergraduates about Rousseau on women and the family, which will almost certainly compel me to publicly wax philosophic about WonderBaby and how WonderBaby proves absolutely Rousseau’s claims that babies tend naturally toward tyranny and that mothers are generally very likely to end up bitch-slapped by said tyrannical babies.

(If you are in Toronto, you can come and see me in action. I have been known to be marginally entertaining when speaking at conferences. I posted details here.)

*******
And, because we all loves us a little miscellany:
1) WonderBaby is, it seems, fine now. I appended an update on her condition, and on the precise character of the WTF mystery object, to my last post. Thank you, all, for your supportive words and your very creative suggestions about The Object That Is Not (Formally) A Sex Toy. (C3P0’s penis. Butt plug. Pickle juicer. Ancient Aztec fertility idol. Pod whence came WonderBaby. Nicely done.)

2) The Crazy Babby Resource Page, which is now overdue according to my own psychic calendar, is currently under development. I hope to get it up this weekend.

3) My beloved Sweetney and the ever-imperial Amalah have a new project and it is just the thing for those autumnal bloggy blahs. Now with more cowbell. Check it.

4) Mrs. Chicky has also been whipping up cures for the momospheric blues. It’s a Very Special Chicky Love Cure (not tested on animals), and as I am nothing if not a proponent of unfettered love-spreading, I must insist that you participate.
5) The Basement has been really, really quiet these days. It’s a slow, reflective time for many of us, I know, so it’s to be expected. Just remember that it’s there, if you need to get anything off of your chest. There’s always someone there to listen.
6) Speaking of chests, mine is gone. Poof. Vanished into the post-breastfeeding air. Anybody seen it? Will it ever come back? I know, love something – 36DDDs – set it free – stop breastfeeding – if it comes back it was yours – doesn’t a drawerful of jumbo catch-and-release nursing bras prove ownership? – if it doesn’t, it never was – well, fuck you then, stupid, faithless titties. 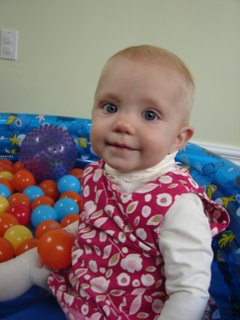 WonderBaby does not recommend pilfering local playrooms for chest-enhancing implements. WonderBaby says that toilet paper has a more realistic feel.