Rooms With A Skew

(In which I dither and cavil and wring my hands once again! Yay! Maybe we should just call this blog Her Angsty and Unsettled Mother…)

I’ve never really considered myself to be a contrarian. If anything, I’ve always worried that I tend too much toward being agreeable. I’ve always been keenly interested in having people like me, and being contrarian isn’t particularly conducive to that end. That said, I’ve been told that I can be pretty forceful in expressing my views, and my husband has been known, on certain days of the month, to refuse to discuss what he reads in the newspaper with me for fear that I will aggressively insist upon such engagement, but still. I think of myself as pretty agreeable, the sort of person who nods a lot in response to whomever is speaking and who peppers her responses with a lot of ‘yeah-yeahs’ and who generally expresses at least some sympathy with any semi-articulate and semi-reasonable opinion.

(This has been influenced, in part, by years of teaching, an activity in which even outright disagreement should be veiled in the politest of terms: why, no, I had never considered the possibility that Socrates was under the influence of narcotic substances while engaging in dialectic. Yes, you are quite right that he does seem to like a good party. But while that does open up some interesting possibilities for interpretation of the entire Platonic corpus, I think that, for the purposes of discussing his teaching on virtue as outlined in the Meno, we need to proceed from the assumption that he was more or less lucid.)

So I was a little surprise by my reaction to the Motherlode conference, which was a wonderful conference, full to bursting with interesting women and great ideas, but which also provoked in me a powerful desire to shout contrary opinions. Not because I fundamentally disagreed with the principles of the conference or the ideas being bandied about there, but, rather, because I was recoiling from some vague but powerful feeling of being expected to conform.

I know. Confusing. I’m still confused, myself. Bear with me.

Here’s the thing: I broadly agreed with most of the principles – feminism, community, empowerment, yada, yada – that provided the groundwork for much of the discussion at the Motherlode. I identify myself as a feminist. I believe strongly in feminism, if we understand feminism broadly as support for women. I believe in the importance of action, and in human beings helping themselves and each other. I believe that mothers should stick together, support each other, help each other along. I believe in community.

I’m uncomfortable in a room where these beliefs are simply expected of me, as a condition of membership in the group occupying the room, and where it is simply assumed that I will nod my head and agree – agree that all women should be feminists, that there is something wrong with mothers who do not identify themselves as feminists, that conservatism is bad, that anything other than social liberalism is bad but that economic liberalism tends toward bad because business and capitalism and power are bad, bad, bad and antithetical to the ethos of womanhood and motherhood. Whether I agree or disagree with any those principles is beside the point – what makes me uncomfortable is the assumption that I will agree, and, perhaps, that I must agree. I’m uncomfortable with any suggestion that there is such a thing as a natural ethos of motherhood (or a constructed ethos of ‘good’ motherhood), universal to mothers, that encompasses a specific and coherent set of values and beliefs.

The momosphere has itself been criticized for this kind of presumed conformity, of course. It has been said that mom bloggers – and parent bloggers more generally – tend to hold similar views and opinions and that we are unlikely to fall into serious disagreement and that the momosphere, for this reason, is a pretty bland place. I think that it is true that the momosphere is largely a community of like-minded individuals – we’re a community of literate and more-or-less technologically savvy adults with children who love to write and who have the luxury of the time and equipment that allow us to indulge in the hobby of writing online. We have a lot in common, so it’s not surprising that we might have certain views and opinions in common. But I do not for one minute expect all other parent-bloggers to share my views. Nor do I believe that other bloggers expect me to always share their views – Kristen’s blog exchange debates, and the recent discussions concerning feminism, among other things, provided ample evidence that there is a tremendous diversity of opinion among parent-bloggers. We’re not KoolAid moms. Far from it: in the blogosphere, I feel free to voice contrary opinions and to disagree openly (albeit politely) whenever and wherever the mood strikes.

But at the Motherlode, I didn’t feel completely free to offer up contrary opinions, or to play devil’s advocate. When someone asked the crowd what right-thinking moms should be doing to set straight mothers who don’t identify as feminists, I wanted to ask (on behalf of Julie and Rebecca and Jennster and countless others) why it was assumed that there is something wrong with mothers who do not fully identify as feminists? When I was asked, outside of the panels, what I was doing as a blogger to avoid being compromised by commercial interests, I choked on my response – why is it assumed that I, as a mother and a feminist, would be strictly opposed to and/or worried about compromising myself for commerce? And when everybody was wringing their hands about the fact we can’t seem to get away from judging each other (this after the hand-wringing about what to do about the misguided mothers who do not identify as feminists), I wanted to ask what the hell was necessarily so wrong about judgment? Isn’t reasonable judgment – the critical evaluation of what we believe to be right or wrong, good or bad – the basis for all political action? For all debate, all discourse? (This is another post entirely; stay tuned.)

The conference – what I saw of it – was full of judgment, it seemed to me, but (with a few moments of exception) this was not the sort of open exercise of judgment that provokes serious debate on fundamental questions. There was a lot of implicit judgment, but no open interrogation of those judgments. (What’s the problem, really, with non-feminist mothers? Why should all mothers identify as feminists? Why should they all be socially liberal? Why should they be wary of Business and Commerce? Why should ‘Business’ and ‘Commerce’ always be capitalized when invoked in these discussions? Why should we view all judgment as bad? Why?)

(For the record, again – and I’m discomfited by the fact that I need/want to make this clear – my politics are emphatically not anti-feminist or anti-liberal or anything of the sort. I just think that, however ‘right’ I think my politics are, I shouldn’t assume that they are the One True Way.)

I want to be careful with what I’m saying here: I’m not saying that the Motherlode conference imposed a silence upon me or anyone else. It was not oppressive: I recognize that it was a wonderful opportunity for women to investigate motherhood on their own terms, in a welcoming space. My discomfort was my own, a product of my own issues and my own ambivalence and my own experience of what it means to be discursively comfortable. I’m accustomed to being one of a very few women in rooms full of bombastic and ambitious academic men who relish the thrill of exposing each others’ weaknesses and defending themselves against such exposure. (Or, flashing pasties at rooms full of pissy women who can only agree that words are good and that blogtards are bad and that Arianna Huffington is tall.) There’s something comfortable, for me – and I know that this sounds weird – about being in a room where everyone expects disagreement, where everyone sits around openly judging the opinions and ideas of everyone else, the better to work out what opinions and ideas are worth exploring further. Being at the Motherlode, in rooms full of so much agreement – rooms full of the expectation of agreement – discomfited me. That’s my issue. And probably a silly issue at that.

Maybe I was just messed up in the head and heart from having messed up as a mother that morning. Or maybe I should blame the patriarchy. I don’t know.

Whatever the case, it’s the thing that has been causing me some post-conference confusion. Shouldn’t I just be happy that a space has been created for mothers to go and talk and revel in their commonality and community and agreement? (I am happy for this, by the way.) Shouldn’t I have just enjoyed all of the rah-rah lovey goodness? Isn’t this what I praise the momosphere for? Aren’t I always going on about how supportive, how warm, how inviting, how agreeable the momosphere is? Why did I get my panties in a bit of twist about all of the enthusiastic agreeability at the Motherlode?

What do you think? Was I being unnecessarily curmudgeonly? Have any of you ever felt a little boxed in by others’ expectations of you – expectations about what you must or must not believe or do – in your capacity as a woman and as a mother? I’d really like to know, because I’m really not sure what to make of my reaction to this experience. 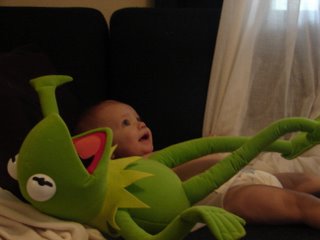 I don’t know, Kermie… I think that most people do assume that you are an environmentalist, and I think that they would be very disappointed to learn that you don’t support the Green Movement…

(Ooh! Hey! Don’t forget to check out the Basement – there’re some folks looking for advice and support and contrary opinions are welcome, if stated nicely. And if you haven’t been around the Mother ‘Hood in a while, you might check it out, too…)