And I don’t watch ER, either

Edit: Update below. In a nutshell: not dying.

So, tomorrow? I’m going to the doctor. After having been hounded to within an inch of my life by the Husband, who is sick – sick, he tells you – of my bitching about still feeling achy and unwell nearly a month after actually being ill and run aground by the TurboBaby, I finally sucked it up and made an appointment.

Not exactly newsworthy, I know. But here’s the thing: I hate going to the doctor. HATE. IT. I can never quite explain what’s wrong with me and always end up sounding vague and confused and when they ask me questions about my general health and how I take care myself I usually end up fudging the truth so as not to sound like a total screw-up (yes, yes, three square meals a day, lots of liquids, plenty of exercise). I worry about not having the right answers (have I been nauseaus, or dizzy? Have I had an earache, or a sore throat that reaches back into the ears? Have I had a dry cough or a hacking cough? Has this been going on for two weeks, or three?) and not giving the right information (did I forget to mention the headaches? the ringing in the ears? the lingering feeling of dread?) I sit in the waiting room or on the examination table consumed with anxiety and guilt, veering emotionally back and forth between the conviction that I am dying from some rare and fatal illness and the conviction that there is nothing at all wrong with me and I am wasting everyone’s time. And I fret and worry and worry and fret about what will happen to me if I am sick (will there be needles? Will I die? Will there be needles?)

(Which, gah. Don’t even get me started on my fear – my toe-curling, gut-twisting fear – of blood tests and gynecological exams. Pregnancy, I needn’t tell you, was torture with its never-ending cycle of both.)

It’s too much pressure, the doctor’s visit. I can’t handle it.

It may be that I’ve made myself sick simply by languishing in this autumnal funk. But then again, it may be that this autumnal funk has been made worse by ill health. In any case, I need to find out, if only to reassure the Husband that I am not perversely clinging to illness in order to make his life more difficult. So I’m going, tomorrow. I may lay awake all night tonight, fretting about rare tropical diseases and needles, but I will get up in the morning and keep my appointment.

You’ll be holding my hand in spirit, right? 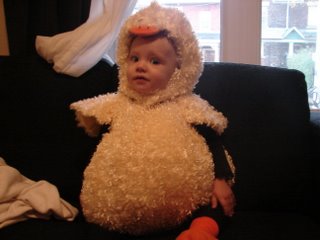 To the best of our knowledge, Asian Bird Flu has not infected the local population of the Great Yellow-Tufted Budgerigar (a feathered, flightless creature, native to central Canada, easily identified by its high-pitched hoot and distinctive waddle).

UPDATE: SO, I am told by doctor that I have, in all likelihood, a post-viral infection, brought on and perpetuated by being consistently run aground by the Great Yellow Budgerigar, which, although flightless, is a fast-moving and demanding creature. Translation: I had a bad virus, and have been unable to recover because there has been no time or physical resources to facilitate recovery, and my body has, accordingly, rebelled.

That, or I’m dying, and the doctor couldn’t tell just by shining a light up my nose and in my ears.