The other morning, I was idly scanning the newspaper while supervising Wonderbaby’s breaking of the fast (corn puffs and an orange and waffles spread with apple butter), when I happened upon this headline: Imagine there’s no Santa.

There’s a happy holiday headline, I thought. I read further. It was an op-ed piece by a woman with school-aged children, concerning her discomfort with the Santa myth and her decision to not let her own children be misled by that myth. I just can’t do it, she said. I just can’t shake the feeling that my sons need to be able to trust that all their parents ever told them was the truth. This, because the story of Santa is, of course, not true.

If you were to ask me, casually, if I thought that the most familiar Santa stories – ‘Twas the Night Before Christmas, Rudolph, et. al. – were based on fact, I would say no, of course. I don’t believe that a fat man in a red suit runs a sweatshop, exploiting cheap elvin labour, at the North Pole. I don’t believe that he keeps a list of who’s naughty and nice, nor that he flies around the world Christmas Eve, dispensing gifts and small bits of coal according to the dictates of that list.

I don’t believe that reindeer really do know how to fly.

But neither do I believe that Santa stories are lies.

Plato wrote, a very long time ago, before there was a Christmas or a Santa or anything of the sort, that there is a very important difference between what he called lies of the soul and verbal lies, or lies in speech. A lie of the soul, he said, is a lie that misguides the soul, misdirects the soul away from truth. It’s a lie that causes the soul to become confused, and so, ultimately, unhappy. A verbal lie, on the other hand, might be as simple as a little white lie, told to avoid hurt, or it might be something more noble. A noble lie is a lie in the sense that it veils the truth, but it veils the truth in such a way as to make it comprehensible to those who are unable to grasp truth in its fullness. It orients the soul to truth, without revealing truth openly (the truth being like the sun – it can be blinding, and so we must, most of us, shield our eyes.)

When I teach the story of the noble lie (which appears in Plato’s Republic) to my undergraduate students, they usually respond, initially, with indignation. It’s a lie, they say. It is meant to deceive, and deception is bad. Yes, I say, deception is bad. But not all fiction is deceptive. I remind them of origin stories, the story of the Garden of Eden and of the Fall (which, forgive me, I do not regard as plainly factual); I remind them of fables and myths; I remind them of the stories that we tell children, stories that we use for the purposes of teaching.

Stories like that of Santa, which, I think, teaches something about generosity and goodness and the idea that all children deserve to be (even if they are not in fact) loved. That the best way to celebrate Christmas is to give gifts without the expectation of reciprocation, to quietly slip a little happiness into the stockings of others. (We could, of course, go darker with this story, and expand upon the ‘naughty and nice’ proviso, and say something about cold and coal-dark hearts being undeserving of gifts, but I am skeptical of the quote-unquote truth of this part of the story and so I will likely – because it does not accord with the quote-unquote truth that I wish to communicate to my children – delete it from the version of the story that I tell them. Such is the power of the parent, who as primary storyteller is both poet and philosopher-ruler.)

(I could, of course, say something here about religion and the original story of Christmas and the purposes that these stories serve and what it might mean to refer these stories as noble lies. But that is a much longer and more complicated post – and in any case it is a post that I have already attempted – and so you must just accept these concerns as subtext.)

But there’s more to this than the question of whether such stories are deceptive. The author of that article wrote that she taught her children that Santa is a character of fiction, no more real than Muppets and Pokemon. Which is fine, I think – except that when I think of my own childhood relationships to characters of fiction, what I remember most fondly is the wonderful uncertainty of those fictions. Grover might have been real (I still experience shudders of disappointment when I see pictures of Muppets lifeless in the hands of their puppet-handlers). So too Peter Pan, and Alice and the Cheshire Cat, and the Tooth Fairy. And Santa. Those characters, and so many others, were fascinating to me because they made demands upon my imagination – they lived only through my imagination, it was my imagination that sustained them, that made them walk and talk and breath. Had they solely been one-dimensional figures, words and pictures on a page, had I been certain that they were not real, they would have remained flat. Lifeless.

Their stories had force, for me, precisely because those stories occupied and energized that wonderful space between my heart and my mind where truth and story and fact and fiction are blurred, where the impossible and the not-quite-possible and the possible become deliciously tangled, where disbelief is always suspended. They lived – they live – and became real in the space of my imagination.

I will never try to convince my daughter that the Santa in the mall is the real Santa. I will never insist to her that there is, in fact, a real man in a red suit living at North Pole with a harem of elves. I will never try to make her believe. I will, however, tell her stories about Santa (of all varieties), and I will tell these in my most assured voice, with my most sparkling eye, with my most animated gestures. And if she asks me whether Santa is real… well, I suppose that I’ll be honest with her. I’ll say that real can mean many things; I’ll say that sometimes it’s enough to believe in something with all your heart to make that thing real in many of the ways that count (to love that thing, to derive hope or comfort or inspiration from that thing). I’ll say that while I can’t personally confirm that there is a Santa who lives at the North Pole (never having been there myself), that doesn’t mean that it isn’t possible that there is a Santa. I will say that it is, in any case, important to believe, sometimes, in impossible things. I will say, with the Queen of Hearts, that I myself have been known to believe in as many as six impossible things, all before breakfast.

All of which is to say that I will encourage her to reach her own conclusions, and that I will encourage her to be broad-minded in pursuing those conclusions, in pursuing understanding of seemingly impossible things. I will give her the opportunity to believe, to embrace the stories and let them live in her imagination. I will let her have her Santa, whatever that means, if she wants him. 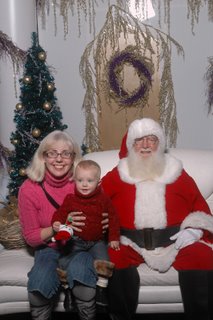 Until it all gets too Sears Portrait Studio, at which point we’ll have to kill Santa off.

(Audience participation! What do you tell your children about Santa?)