A Pox On Me

WonderBaby has, happily, recovered from her pox. A few small red marks here and there, but otherwise back to normal.

Funny thing, pox. In archaic usage, the term sometimes referred to misfortune or calamity, and it certainly seemed to me to be exactly that when first the spots began to appear on the flawlessly butter-soft skin of my baby. My sweet, sweet baby was sick, uncomfortable and disfigured by countless angry sores – the very depth of calamity, to my anxious maternal mind. And yet perfect strangers – pharmacist, doctor, random persons at check-out counters – insisted to me that we were oh so lucky. Such a good time for her get chickenpox, they said. Best to get them as a baby. Get it over with! Avoid the vaccine!

Hurrah, I muttered weakly in response, clutching my poxy baby to my chest, fingers fluttering over the persistent sores scattered across the back of her sparsely-haired head. Hurrah for me, I thought. And, fuck you. In those moments, I found it hard to conceive of the pestilence as luck. In those moments, all that I could think was, my baby is sick and uncomfortable and has sores all over her tiny body and this is supposed to be a vacation and that, my friends, does not feel like luck to me.

Now that it’s over, of course, I can wax authoritative on the character of our luck – look at how nicely her pox have healed! How quickly! How fortunate are we that she will not have to go through this when she is older! And: how lucky we are that there will be one less terrifying needle, one less icky injection of yuck into her pristine, chubby little thigh! I can forget, now, how frustrated I was; I can forget how I winced in sympathetic discomfort as she rubbed her face furiously with her (mercifully plush) toy frog, I can forget how tears pricked my eyes when she woke in the night, moaning and whimpering, squirming in her itchy condition.

But what I cannot forget is this: that some people recoiled from her, turned away from her spotty, poxy aspect, averted their eyes from her disfigured countenance. We were travelling, we had no choice but to take her into public spaces for refuelling, for diaper changes, for fresh air. And when we stepped into such spaces, she would, as is her wont, wave furiously at all and sundry, calling, eh-oh, eh-oh, HI! Summoning attention, demanding smiles, reaching out into the world for More! More! Happy! Smiles! And! Waves! And although there was often some kind soul, some sympathetic parent or grandparent who understood, who recognized immediately her condition, and gaily waved and cooed back at my gregarious girl, there was, too, always someone else – too often, multiple someone else’s – who blinked and stared and then looked away, discomfited by the little face with the mask of red spots.

WonderBaby, unaware of the curious social dynamic unfurling around her, would keep waving and calling, until distracted by her sippy cup, or a crayon, or some four-legged creature that she would, invariably, and loudly and proudly, declare to be a cat. I, meanwhile, bit my tongue and pressed my fingernails into my palms to keep from shouting at these people: she’s a baby, she has chickenpox, you can’t catch it from a smile or a wave.

I bit my tongue.

Later, spending the New Year with good friends, I mentioned these uncomfortable moments. Oh! my dear friend exclaimed, a lesson in vanity! And I replied – echoing, if memory serves, her exclamation – yes!

WonderBaby is a gregarious baby. She seeks social intercourse wherever she goes, and she usually finds it. But she’s no stranger to the turned shoulder, the averted eye: there are a great many disdainers of children in the big city, people upon whom the tremendous charms of a WonderBaby have no effect. She has waved furiously and futilely at many a Scrooge and many a Grinch on the subway, in the cafe, in the restaurant, in all of the public spaces that we frequent. And she has always, always, taken this rejection with an admirable aplomb: You don’t see me! Oh well! On to the next person! Hi! You! Eh-oh! 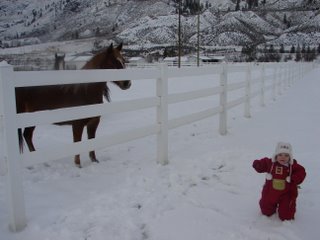 I, of course, upon witnessing this, have many times cursed the child-haters under my breath for their shallowness of spirit (a shallowness of spirit that surely must attend such frigidity in the face of such innocent charm, no?) But I never took it personally; I can understand that some people don’t like children, are irritated by babies, piqued by kittens and puppies, etc, etc. Whatever. I did, however, take it personally when it seemed that my child was being rejected because of her appearance, because of some apparent disfigurement, because she didn’t look ‘right.’ It bothered me that some people were looking at her and thinking what is wrong with that baby? and not what an adorable baby! More than once, when we ventured out of our rental minivan, did I pull her cap down as far as it would go, down over her cheeks, so that the spots would be less visible. More than once did I insist to my husband that we not linger at this gas stop or that drive-thru, because WonderBaby was trying to be social and people were turning away and it was hurting my feelings.

The vanity being hurt was mine. I have grown accustomed to having an attractive baby, a quote-unquote normal baby, a baby with big eyes and a big smile who loves to laugh and smile and wave. I have grown accustomed to the oohs and aahs and coos and clucks of admiration. I have become a vain mother. And I am, I have to say, ashamed of myself for this.

WonderBaby didn’t care. Oh, sure, she would prefer that everyone and their dog (although she would call that dog a cat) respond to her greetings, to her invitations to chat and play, but she doesn’t take it personally when they don’t. What she seems to understand intuitively (I don’t know what follows to be perfectly true, but allow me the indulgence of speculation): that it’s about them, not her, if they don’t respond. She has not yet developed what Rousseau called amour propre – love of one’s own, in the sense of loving one’s own position/status/reputation viz. others. Vanity. WonderBaby still enjoys the happiness of pure amour de soi. She has not yet developed vanity; she loves only to be happy in herself, and being happy in herself is blissfully easy, as it requires nothing from the opinions of others. Love, be loved, live – that’s all.

How vain. How dangerous.

I know that this issue is more complicated than I am presenting it here: I was reacting as much on the basis of my own vulnerability in the face of WonderBaby’s illness, my own fears about being persecuted (however quietly) for having a chickenpox-ridden baby out public (however unavoidable on my part), my own fierce desire to protect my weakened child from any measure of badness in the world. I was being a mother. But I wasn’t just being a mother – I was being a vain mother. I was, in those difficult, painful moments, viewing my daughter through the eyes of these small-souled strangers, these limited human beings who turn away from anything that is not pleasing, not normal (oh, the discomfort of asking myself, truthfully, whether I have so looked away!) In those moments, the vain mother in me saw only what they saw: the spots, only the spots. In those moments – however fleeting – I was blind to her pure, beautiful glow. And that makes me sad. 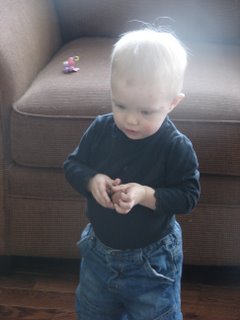 A mother should see only the glow. Only, ever, the glow.

Mothers – parents – should be blind to the apparent, superficial beauty of their children; they should be blinded by the glow of the true beauty of their children; they should see only this glow; this glow, and only this glow, illuminates what is truly lovely about every child, and casts opinion into shadow. We should do – I should do – but it’s hard. We are, after all, only human. We are, for that, always, in some measure, vain. The lesson, then?

Look for the glow, behold the glow – but invest in hats.

There are some great takes on the subject of love and beauty and parental vanity over at Mad Hatter’s place, and at Meg Fowler’s, too. Do check them out. And if you know of anyone else who has taken this subject, drop me a comment and let me know. I’m behind on my blog reading and am missing stuff all over the place, so help a girl out…

Speaking of which… apparently it’s, like, National Delurking Week and that means that you are contractually obliged (it’s in the fine print of the social contract, trust me) to delurk and say hello. I’ll get you started – HELLO! I’m Her Bad Mother! And you are…?