It is widely agreed, among our friends and family, that WonderBaby looks a lot like me. There’s a lot of Her Bad Father in her (her height, her cheeky smile, something about the curve of her brow), but at first glance the resemblance is most obviously to me, her mother: she has (as they say) my eyes, my ears; her colouring is mine, as is her big round head. (She also has my freakishly long spider-monkey toes, but most people never see those.) 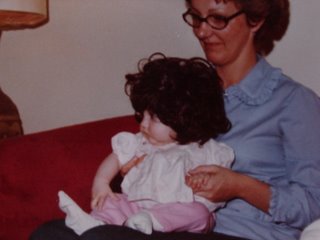 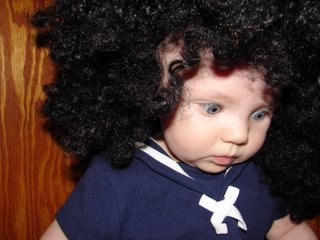 Which is the be-wigged child of the seventies? And which the WonderBaby?

Of course, when Her Bad Father and I talk about what characteristics WonderBaby owes to us, we’re more likely to discuss the quirks of her character than we are the colour of her hair or the curve of her cheek or the prehensile reach of her toes. We’re more likely to discuss whether her giggle is mine, or her frown his; her love of books from me, her physical strength from him. We argue, lightly, about whether her stubbornness is due to me, or due to him, and we wonder aloud about how it came to be that two such (ordinarily) reserved people spawned such a spirited, gregarious child.

There is, of course, much that can be said about the question of nature versus nurture in the development of children; it would take multiple posts, I think, for me to sort through the questions and ideas that I have about the variety of influences that bear upon WonderBaby’s development. The question that I have right now, however, is pretty specific: is it possible that children – babies – inherit from their parents, or from one or the other parent, their inclinations with regard to sleep? To food? To those things that we ordinarily regard as habits?

Sleep habits, eating habits – these are certainly shaped by a variety of influences, too numerous to list here. And I have no doubt that these ‘habits’ can be formed or reformed, to some extent, through all manner of intervention. But is it possible that these are also, to some degree, bred in the bone? That the extent to which they can be reformed is limited, to some degree, by nature – by an inherited nature? Or, simply, by a nature that asserts itself regardless of source?

I guess that this is just another way of asking: when it comes to certain issues – say, one’s 14 month old baby being pretty set in her ways with regard to certain tendencies in the arena of, say, sleep (like, say, being resistant to having any during daylight hours) – is there a point at which you need to say, okay, fine, she’s just like that, and roll with it?

And add, perhaps, by way of explanation: just like her mother?

I’ve never been what is usually called a ‘good sleeper.’ My mother tells me that she was nearly driven insane by my refusal, in infancy and beyond, to take naps. (She resorted, on the advice of her doctor, to sedatives. For me. Aah, the seventies! Dope the babies!) I’ve been an insomniac for as long as I can remember. And, I cannot make myself sleep during daylight hours, unless I am so physically bagged that I have no choice in the matter (after, for example, weeks of restless insomniac nights filled with endless Law and Order re-runs.) I’m a bad sleeper. Always have been. 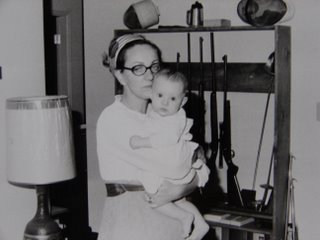 Then again, does one ever really sleep easily near a rack of guns?

So when I fret and tear my hair about WonderBaby’s sleep habits, am I, really, fretting uselessly, about something that is bred in the bone? Something that cannot be changed, or only changed with tremendously difficulty? We have, after all, tried everything: we’ve Sears-ed and BabyWhispered and Weissbluthed and Ferberized until we were blue in the face. And still, nothing changes: the best case scenario (which is, I admit, a pretty good case) is that WonderBaby sleeps 12 to 13 hours at night and then only cat-naps during the day; the worst case (the one that has prevailed over the last couple of weeks) is that she wakes during the night and still forgoes the daytime naps. Which is, I needn’t tell you again, a little bit frustrating.

This isn’t yet another plea for help. On the contrary: I’m trying to wrap my head around the idea that this is just the way it is. Not as a matter of surrender, but as a matter of being realistic, and being respectful of WonderBaby’s nature. Perhaps not every baby can be a quote-unquote good sleeper (another post in itself – what is a “good” sleeper, anyway, and why is that the gold standard?); perhaps not every baby can be ‘made’ to cleave to the ideal standard of sleep. Perhaps I should be grateful that, under ordinary circumstances, WonderBaby sleeps so well at night. If she is getting, end of the day, the sleep that she needs, who am I to say how she gets that sleep?

I’m just looking for permission, I guess, to let certain issues go. To relax my grip on certain ideals, certain standards. To stop bemoaning the absence of the conventional nap in our household, for my own – our own – peace of mind, and, perhaps, so that I will be more accepting of the absence of the conventional anything in the future. Although it is, perhaps, not permission, so much as affirmation, that I’m seeking: that it’s okay to relax. Go with the flow, so far as is reasonable.

This isn’t, then, so much about whether so-called sleep ‘habits’ might be hereditary, or inscribed by nature, as it is about whether it’s okay for me to chill out, for me to shrug my shoulders, just a little, and say, maybe, that’s just how it is… to focus on the question of whether I can, she can, we can live with how things are, and go from there… 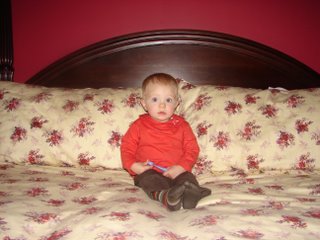