Wherever You Go, There You Are

As I mentioned in my last post, we’re having trouble sleeping around here. But I have to say: it’s not so much the lack of sleep that is weighing heavily upon me (although that lack is a weight uncomfortably borne), as it is the realization, for the gazillionth time, that I have no idea what I’m doing, as a mother. 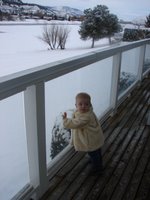 This really is the most difficult thing about being a parent, I think: no matter how far you come, how much you learn, you’re never fully prepared for what comes next. You can’t predict, you can’t foresee, you don’t know what is around the corner. Sure, your baby sleeps fine now, but will she sleep tomorrow? Next week? Your routine works today, it’s worked for months and months, you got past that swaddling issue (sooo last year), your baby goes down nicely in her crib and sleeps through the night and you’re so pleased, you’ve figured it all out, you can sit back and take a deep breath and relax. And even though you know that parenting, that life with a child, is an ever-changing landscape – or, rather, a sea upon which your boat cruises pleasantly until the next change of current, the next phase of the moon, the next perfect storm – even though you know this, you are always surprised when the change comes. You expect it, you know to expect it – so why is it always such a surprise?

WonderBaby is, as I think I might have mentioned before, an active baby. A spirited baby. She gave up voluntarily napping in her crib at about nine months of age, just before she started walking on her own. That surprised me, because she had, for at least five months, napped so well. And I was so dependent upon those naps, upon what I believed to be the accomplishment, all mine, of making the naps happen, because she was so active when awake, because there was no rest when she was awake. So when it all stopped – when she decided, contrary to my wishes, that the lovely, lengthy crib naps should stop – I was thrown. Overboard, without a life preserver. 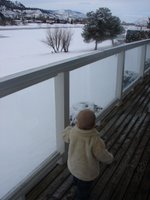 But I adapted; we changed course. I periodically test the crib-nap waters (because they were so calm, so blissful), but WonderBaby resists that navigation, so we make do in the choppier waters of stroller-naps. Not so bad, I tell myself: at least she sleeps through the night. At night, the sails go down easily. Night-time is usually entirely predictable, excepting the infrequent storms of teething or night-terrors. That is, it was entirely predictable until the chicken-pox hit during our visit to BC, followed by storms of jet-lag and cutting molars and god knows what else.

WonderBaby has only slept through the night twice since Christmas. And she still doesn’t go down for a nap during the day without a bitter fight (and then, still, only in the stroller or car-seat.) We’re getting pretty tired around here. But as I said above, it’s really not so much the tired that’s getting to me as it is the discomfort that attends not knowing what to do now, and the frustration that attends facing, unprepared, unpredicted winds and tides. I thought that I had the sleep portion of this voyage all mapped out. It appears that I didn’t. And now I feel, well, just fucked.

But I’ve been here before, more than a few times. And since I’ve been keeping a log of the voyage, I’m able to go back and see how I coped. Way back in April, when we hit a perfect sleep storm (transitioning WonderBaby into the crib while weaning her from the swaddle, holy hell), I took solace in Socrates…

The ancient Greeks had a word (I said) to describe the condition of being at a loss: aporia, άπορία, from a poros, which means, roughly, to be without a passage or a way. It is to be without direction, without resources, to have no way out. It is ordinarily used in a philosophic context: the Socratic stance is the aporetic stance, the assertion and demonstration that one does not meaningfully know what one thinks one knows; that one is, in fact, at a loss with regards to the thing that she thinks she knows, and so in the condition of aporia. From this, it is hoped, one will be filled with the desire to pursue knowledge of that thing (and, if one is truly philosophic, the desire to pursue knowledge more generally and fully.) Aporia, then, from a Socratic perspective, from the perspective of the philosopher, is a good thing…

This Bad Mother, however, doesn’t have the time or the inclination to savour the philosophical condition of aporia. This Bad Mother has no interest in elenchically interrogating the nature or character of sleep as it pertains to babies. This Bad Mother would very much like to smack hard any character – even if that character is a voice in her own head, which admittedly makes smacking difficult, if not impossible – that tells her that real understanding comes with knowing that she does not know. Because this Bad Mother needs more sleep and she needed it yesterday.

Which is to say: I’ve spent a great deal of time looking for that elusive knowledge, the Secret Code of Babycare, that wisdom that will light the way out of the cave and out into the sun-drenched world of predictable schedules and consistent and abundant sleep. I’ve been looking for a Way Out.

I haven’t found it. But stay with me.

So we’ve had a few rough nights – very rough nights – recently. The whole sleep thing suddenly, although not entirely unexpectedly, went tits up: WonderBaby outgrew, literally overnight, both her bassinet and her swaddle. And Her Bad Parents, despite all of the fretting and hand-wringing about whither the swaddle, did not have a plan in place for adapting to these new circumstances. What used to work, and all that we thought we understood about baby sleep, has been revealed as nonsensical, useless crap. Welcome to Mommy Aporia…

(Here I go on to bitch and moan and pontificate about the horrors of the swaddle-bust and the discomforts of bed-sharing and the nightmare that is ‘crying-it-out’ with a baby that can cry LOUD and HARD for HOURS. I’ll spare you; you can review the details in the original post, if you like.)

Again, this is all entirely experimental. We know that we will continue to face challenges, that some of the above strategies may be misguided, that they will fail. We’re totally winging it, going with what works, with what is practicable, with what feels right. It’s all that we can do. But by doing so, by following our guts and acting on our well-considered instincts, I feel that we’re gaining something, that we are no longer entirely at a loss. And maybe, just maybe – lack of sleep aside – coming to love this whole messed-up, mapless journey. We’re in this together, the three of us: this is family. Blind, fumbling, loving family. I don’t know why, but somehow the ‘blind’ and the ‘fumbling’ seem to have everything to do with the ‘loving’ and the ‘family.’

So I still have no idea what the fuck we are doing, but I’ve come to understand (however reluctantly) that I cannot simply think my way through the challenges that new motherhood throws at me. Motherhood – parenthood – is, I think, all aporia. And it is not the aporia that can be met by philosophy. This aporia is a condition that can only be met by the gut, and the heart. It’s the no-way-out that you come to love because you love – with whatever difficulty – the struggle that defines what’s within.

It’s taking some time, and some work, but I’m coming to understand it. I think…

I have to take these words to heart, now. Recite them to myself as I lay me down to sleep, as I wish good sleep for WonderBaby, as we navigate together the days and nights of our family life. I have to remind myself that the one thing that I always have, always know, is love. Because love’s the only map, the only guidebook, the only means of navigation that I have, on this voyage. 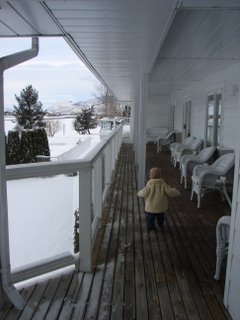