by Catherine
Uncategorized
Share
Because I’m lecturing on Hegel this week and, although it’s tempting to try to whip something up about how public reaction to the death of Anna Nicole Smith demonstrates the extent to which our culture really is a world of self-alienated spirit wherein our understanding of ourselves as self-conscious subjects can really be radically thrown by our recognition of a washed-up drugged-up former Playboy centerfold as another self-conscious subject (okay, semi-conscious, but nonetheless possessing of a consciousness – limited or otherwise – that might be negated by death… BIG SIGH…), although such Hegelian analysis of the death of a Trimspa model is tempting, my brain is too tapped out to do much beyond contemplating the unbearable cuteness of being that is demonstrated by the WonderBaby… 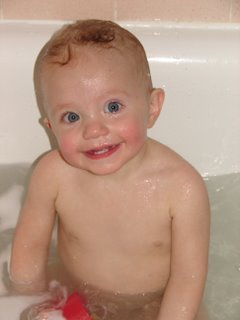 Hegel’s interrogation into the Phenomenology of Spirit can really be most effectively answered by a baby’s smile: I am aware of myself as mother because she presents herself to me as known. Also, because she says to me, with that smile: HEY! I SHIT IN THE TUB! FOR YOU!

… I haven’t much to say. And in any case, whatever it was that I might have said while under the influence of the complete works of Georg Wilhelm Friedrich Hegel, E-Online and one too many glasses of blended scotch, you probably don’t want to know.