Groove Is In The Heart

You know I love you, SlouchingMom, but no. Unless you consider boob-shots and engorgement chatter and actual pregnancy test results (a revelation that caused my mother-in-law to suggest to my husband that he might exercise better editorial control over my writing) and the like unusually unrevealing. I’m no Motherhood Uncensored in the no-holds-barred-no-truth-unbared blogging department, but I’ve been know to share a grotty detail or two about my life.

But her question got me thinking: what would I consider too revealing?

As it goes, sharing something like our decision to go ahead and upgrade the Bad Family to Bad Family XTM is not, in my books, particularly revealing. It falls into the category of things that I can’t help sharing because I can’t help writing about them because they’re so much on my mind. So it is that I would not be able to wait until after a positive pregnancy test, let alone twelve weeks after a positive pregnancy test, to write about the emotional roller-coaster of making the decision to re-enter the world of pregnancy tests and taking those tests and waiting to see if a positive test results sticks. Couldn’t do it. I’d have to stop writing entirely.

The posts that, for me, have felt most revealing have been those posts in which I confess some aspect of my bad motherness. For all that I cheekily trumpet my bloggy identity as Her Bad Mother, I am deeply sensitive about actually being a bad mother. The posts in which I reveal my fears and anxieties, in which I admit to feeling powerless or anxious about my ability to mother… those posts are difficult to publish. And the most difficult post in recent weeks – the one that caused most hesitation over publishing – was the one in which I admitted to having judged another mother, and to having missed an opportunity to reach out to another mother who might – might – have needed or wanted to be reached. That, for me, pushed the boundaries of what I was prepared to reveal of myself.

Still. I did cross those particular boundaries. I revealed.

Long has this meme circulated the blogosphere, and many are the bloggers – mommy and otherwise – who freely share their playlists and Top 20 and All-Time Favourites. Who reveal their musical tastes happily, with the same ease that they might reveal their preference for dark chocolate over milk chocolate, or peonies over tulips, or lattes over americanos. Who tell the world what voices, what melodies, whisper through the wires of their iPod earphones. Who bare the groove of their souls.

Clearly, I have issues about music. I love music. Loooove. I’m that weird chick who bursts into song on the subway, suddenly, unable to keep the lid on the melodies bubbling and frothing in my head. (This, without the iPod. With the iPod, I lip-synch, silently. But animatedly. Very animatedly. I’m not sure which is weirder – the unprovoked songburst, or the mimed aria. You tell me.)

What was I saying? Right: music, for me, is (notwithstanding my public displays of performance) a profoundly intimate thing. What’s playing in my head right now? To tell you that would be to give you a snapshot of the state of my heart and soul. Perhaps it’s as light-hearted as the theme to The Backyardigans, or as bouncy as old De La Soul. But it might also be as dark as Johnny Cash covering NIN’s Hurt (soul heavy, eyes wet, fingers twisting worries to shred, this song tells me the story of the pain of someone that I love. Soul, heavy; heart, sore.) It might be sweetly nostalgic, swaying to an old lullaby. It might be sadly nostalgic, strumming the chords of a memory of old, lost friends.

Whatever the state of my heart, its soundtrack is an intimate thing. One that I’m reluctant share openly. Because it is so intimate, but not only for that reason (I am, after all, not one to shy away from intimacy in my writing): I’m reluctant to share because it is, potentially, a little embarassing. Revealing my playlist or what is on my DVD turntable reveals me, as a classics geek (Bach’s Cello Suites in multiple recordings) and a creature of habit (Johnny Cash Children’s Album) and stuck in the 80’s (The Smiths) and relentlessly girl-centric in my love of jazz (Nina and Ella and Shirley) and relentlessy girl-centric, period (Imogen Heap and Feist and Madeleine Peyroux) and an uncool dappler in contemporary pop (Mika and Peter, Bjorn and John.) 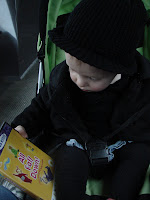 That is, it would reveal me as such, if you could shovel past the stacks of Teletubbies DVDs. Mommy first, in all things. But still, revealing. Too revealing? Maybe not. My stubborn insistence that my musical tastes are more private than my underwear drawer is probably just one more weird Bad Mother glitch. (A glitch that sounds like this, no doubt.)

But then I never told you that I was normal.

(So, Bon, does that count as having done the meme?)