We Are Not Alone

When WonderBaby was born, I was overcome with amazement at the miracle that I had performed. I was overwhelmed with joy. I was suffused with love.

I felt as though I had been hit by a truck.

It was (it remains) a complicated emotional experience. I was experiencing love as I had never experienced it before: I felt, at the moment of her birth, that I finally understood love, real love, the kind that makes you at once profoundly thankful for life and completely unafraid of death. But at the same time, I was experiencing pain as I had never felt it before. And fear, real fear. The kind of pain and fear that put you in terrified awe of life, and make you keenly aware of the ever-present shadow of death.

It was (it remains) an experience – a state of mind and heart – that is powerfully difficult to explain or describe. So it was that when anyone asked me how I was doing, immediately post-partum, I was at a loss for words. How am I? Fine. How was it? Hard, but fine. How are things? Fine.

Fine, I would say.

So it was – I thought – that no-one understood what I had gone through, what I had felt, what I was feeling. So it was that I didn’t tell. So it was that I didn’t tell one of my very, very best friends, who would experience it for herself a few short months later. I couldn’t tell. I didn’t have the words. And even if I had the words, I thought, I wouldn’t be able to weave them into sense.

So I remained alone with my story, amazed at the aloneness. Gazillions of women give birth, have given birth, and I felt alone in my experience, like the lone witness to a UFO landing. You wouldn’t believe me if I told you. But it changed my life. 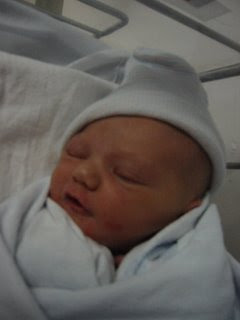 And then I found the blogosphere, and there you were. All the gazillions of you, mothers, who have lived, who do live, this experience, who have seen the universe open up in front of you and spill its mysteries, who have been pierced by beams of infinite light, who have been torn in two and lived to tell how amazingwonderfulhurtfulheartful it was. Is.

And you do tell. You do. You have found words. You have given me words.

Thank you, Tulip, for reminding me.