So, I’m feeling all good and all this past Wednesday afternoon, wrapping up teaching for the week, posting a little ‘hey I’m off for a few days’ post, gearing up for a little travel and a lot of talking, good friends, interesting projects, s’all good.

Then I head into the washroom to freshen up before heading home for the day – after an afternoon of lecturing – and notice. That. My. Fly. Is. Open.

As it must have been for, oh, the previous couple of hours. During which time I:

1) Chatted with a colleague outside the student union building;

3) Conducted an hour-long lecture on the thought of Karl Marx.

IN FRONT OF 50+ UNDERGRADUATE STUDENTS.

NOT BEHIND A LECTERN. 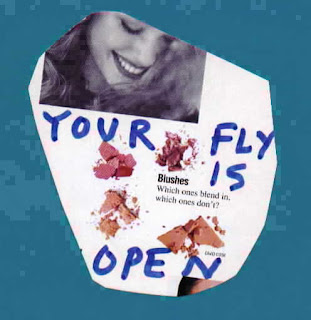 I ceased posturing when a faculty member from the Department of Economics came in and raised her eyebrows at me, and immediately set about washing my hands, quite unnecessarily.

It was at that point – my attention momentarily diverted from my crotch – that I noticed that I had suddenly sprouted a giant zit on the very frontmost tip of my nose. And became immediately obsessed with figuring out whether that zit had been there throughout My Afternoon of Zipless Stupidity or had just sprouted, and, then, whether the presence of a giant zit on the nose of a zipless lecturer might distract from her state of ziplessness.

I concluded that it all just sucked. I remain committed to that conclusion. Am silly, and slovenly, and none too happy about it.

So tomorrow morning I get on plane with my zit and travel to Kentucky whereupon I will meet good friends and speak publicly and generally expose myself to further opportunities for embarassment. Feelin’ good about that.

Nothing like a double dose of the stupids AND the uglies to nuke one’s self-confidence.

Tomorrow will be a better day. But I’ll be sticking to skirts, just in case.