The Good, The Bad, and The Bratz

I am, as most of you know, on record as hating Bratz dolls. Loathing Bratz dolls. You know, in that railing-against-the-hyper-commercialized-hyper-sexualization-of-all-things-pertaining-to-childhood kinda way.

Which is why there may be some serious karmic payback for this: 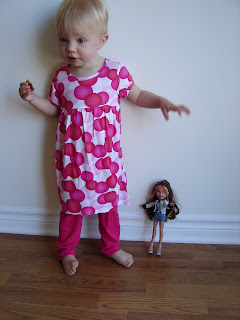 This weekend, WonderBaby came within inches of a Bratz Doll. Fractions of an inch. At one point, she even peered up its scrap of a miniskirt, regarded its black-mesh thong panties with disdain, and then flung it to the floor. It was gratifying, to be sure, that she rejected the thing, but still: I let her have that skanky thing in the first place.

Do I go to Sanctimonious Hypocrite Hell for that?

To be clear: I did not buy this for her. It was not a gift. It belongs to my niece, and was offered, to WonderBaby, as something to play with during our visit this weekend. And because I was exhausted from a difficult night with an off-her-schedule WonderBaby and was disinclined to play patty-cake and Whack-A-Mommy all afternoon, I acquiesced – with shrilly-voiced reservations – to the Bratz Doll.

My niece, it should be said, is a bright and lovely twelve-year old with a very keen sense of self. A bright and lovely and self-aware twelve-year old who makes no apologies for her Bratz Doll. She listened, patiently, as her older sister and her grandmother and her aunt disparaged the tarty plastic toy and its tarty clothes and its general tartiness and then said, serenely, I like her.

She went on: I like her clothes. I wouldn’t wear them myself – and at this she rolled her eyes at us, the universal gesture for LIKE, DUH – but I can still like them. I think they’re fun.

To this, I had no response. Oh, sure, there’re a zillion things that could have been said, things about how such dolls contribute to the objectification of women, how such a sexualized toy desensitizes children to overt displays of sexuality, how such a toy might make overt displays of sexuality seem okay, yadda yadda yadda blah. But faced with a self-possessed, self-reflective twelve-year old who understands that her doll is extreme, who understands that these kinds of arguments can and will be made, over and over and over again by well-meaning mothers and grannies and aunties and other assorted nosey parkers, I was left with only this: the deafening echo of DUH. The recurring image of eyes being rolled, of lips mouthing the words yeah, and?

Because, really, from the point of view of a girl playing with such a doll, so what? It’s just a doll.

My niece is, as I keep saying, a smart girl, a nice girl. The kind of girl that I hope WonderBaby grows up to be. And in defending her Bratz Doll the way that she did, she gave lie to many of my anxieties about Bratz Dolls: that they encourage girls to aspire to slutdom, that they make ‘Skank-Ho’ an acceptable look for the pre-teen set, that they teach children that hyper-sexuality is the norm for young women. For my niece, the Bratz Doll is just that: a doll. Not a role model, not a source of inspiration: just a doll. Kinda fun, kinda silly, no more realistic than – and not to be taken any more seriously than – a bepetticoated Holly Hobbie or a Spiderman figurine or an Olsen twin.

Of course, not every girl is as self-possessed – nor, perhaps, as bright and well-loved and confident – as my niece, and so not every girl is going to regard a Bratz Doll with the same degree of clear-sightedness. And for this reason, among others, I still think that Bratz Dolls – or, rather, the creators and marketers of Bratz Dolls – are, in their way, hell-spawn. But any instrument of evil is really only evil insofar as it is wielded as such, no? I’m prepared, now, to accept the argument that, in the hands of a bright and self-aware child, a Bratz Doll is, very possibly, no more pernicious than Smurfette. It’s my responsibility to raise my child to be self-aware, not the responsibility of toy-manufacturers and toy-marketers and Toys-R-Us. And if I raise a bright, self-aware child, I needn’t be so worried about what pernicious crap is being hocked in toy stores. (My concerns about the decline of Western civilization are, although related, another matter entirely; in any case, my fruitless anxieties about that decline should probably be kept, so far as possible, separate from my anxieties about matters over which I have some control.)

This is probably something that every other decent parent on the planet already knows, but it hit me this weekend with all the force of a two-ton epiphany: toys don’t corrupt children – lazy, inattentive parenting corrupts children. So, as a decent and attentive and only occasionally lazy parent, I needn’t get my (decidedly-not-mesh-thong) panties in such a serious twist about Bratz Dolls and their ilk. At least, that is, until WonderBaby tells me that she wants a Bratz of her own, at which point I may revisit and revise this entire argument, because I am entitled, as a mother, to reverse attitude on absolutely anything I choose.

In any case, any parent who lets her child keep a phallic object as a lovey probably shouldn’t throw stones at thong-wearing dolls. 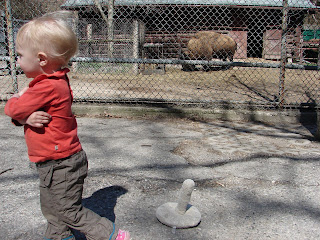