Did Iron John Do Plumbing?

by Catherine
Uncategorized
Share
I love my husband for many reasons, but chief among those reasons is this: he’s a manly man.
He’s the kind of guy who you know could totally protect you in the wilderness, or in the aftermath of a nuclear attack (which you survived because he’s the type of guy who could build a bomb shelter, by hand, if there were any real threat of nuclear attack, which there’s not, so stop giving me nightmares already. I lost enough sleep in the eighties, thank you very much.) He can guide rafts through white-water rapids, he can fight forest fires, he can building a cabin, he drinks scotch and beer and mixes obscure cocktails involving onions and tabasco. He drives an old Saab that he loves because it has rocket engineering. He knows how to tie complicated knots, the kind that you need to know how to tie on boats, and dreams of sailing around the world on a tall ship. He gets his hair cut by a Portuguese barber, the kind with a really sharp razor and an attitude. He likes attitude, but only in old men from old countries, and not from disaffected youth, who he thinks should just pull up their saggy pants already.
There’s not the faintest whiff of metrosexual about him (okay, maybe a wee poof around the designer eyeglass frames), even though he works in television, which should give him a free pass to be as fussy and glossy as he wants to be. But he doesn’t want to be, not at all, and I love that about him.
What I’m not loving so much, right this minute – though I hasten to add that this unlove is not directed at him – is the fact that my manly man decided to rip apart our bathroom this weekend and not put it back together again. Because, you know, he didn’t sign up for the plumbing and now the weekend’s over and hey! Look! Over there! Isn’t that a commercial that needs shooting? Exit Her Bad Father, stage right, leaving his tools and pipes and miscellaneous man-crap in a manly death-trap behind him.
Now we have this, where my bathtub is supposed to be: 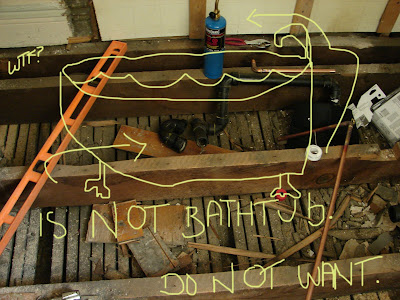 And instead of a toilet: 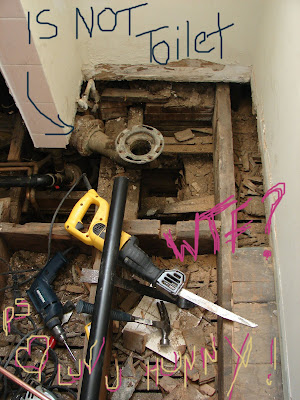 Which means that our ablutions look something like this: 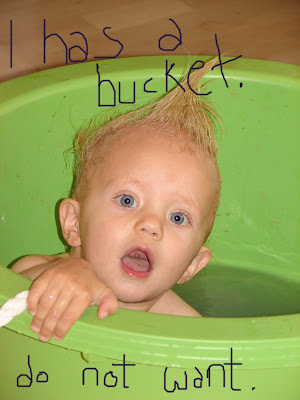 Which is – however convenient for photo opps – annoying in the extreme.

To be fair, he has called a contractor, who will, sometime this week, restore our bathroom and liberate us from the buckets.
In the meantime, I am reserving the right to love the man and disdain, for the moment, the manliness. Because you just know that if he were a metrosexual, and understood the joy of bath products (and, let’s face it, baths in general. Real men prefer showers, but will make do with buckets) this never would have happened.
**********
See below – and here, at BlogHer – for info about BlogHers Act Canada – and check out the cool button! (steal steal steal!)