I’m still sorting through the literal and figurative detritus of the National Lampoon adventure that was our recent camping holiday. So far as I have been able to determine since our return, I think that I came away from the experience with nearly 400 digital photos, 60 lbs of dirty laundry, innumerable mosquito bites in unmentionable places and the discomfiting realization that I am currently marching determinedly into the condition of being relentlessly boring and that that’s okay. More on that once the laundry’s sorted.

The trip was good, though, on the whole, in that strange way that deeply stressful but enlightening experiences can be, when interspersed with breaks for building sandcastles and paddling canoes and quaffing cheap liquor. As, for example, when two days of sharing a 29 foot long motorhome with my mother-in-law culminated in a spectacular thunderstorm that turned the campsite – shared with three sets of siblings-in-law and their families, living in tents – into a mud slick and drove everybody into the tiny, muggy tin shack on wheels that we were calling home, whereupon there was no choice but break open the tequila, let the children swing from the bunkbeds and upper cabinets and make the best of it. It’s moments like those that teach you that when life gives you thundershowers, mud and in-laws all in one messy package, it’s best to just pull out the liquor and throw a party. Those are life lessons. They’re precious. 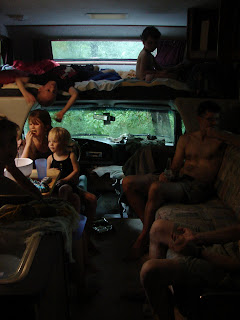 It’s too easy to forget that most of things that cause us stress and anxiety are actually quite ridiculous, when considered against the vast, inscrutable complexity of nature and the universe and life and everything. That being human is a condition of being relentlessly silly, insofar as being human means struggling against disorder and chaos and mess and thunderstorms. We can’t fight thunderstorms. They just happen. 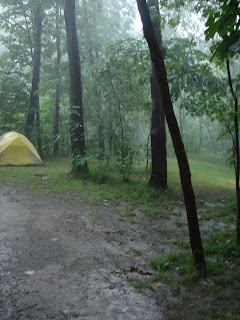 We can’t fight a thunderstorm, but we can shelter ourselves against a thunderstorm, we can huddle together wherever it’s warm and dry, and maybe have a drink or two or three and sing a song or six and tell a joke or seven to pass the time while the rain and the wind pound the walls around us and then, then, when the rain has passed and the ground is sodden with mud and rain-slicked leaves and we go outside into the fresh-scrubbed air and stamp our feet into the soft ground – then, we can dance.

(This is not, perhaps, exactly what was called for in PBN’s Make A Move On Me Blog Blast – intended to promote Baby Loves Disco – but hey. It’s dancing.)