One of the many, many things that I foreswore ever doing as a parent, before becoming a parent, was giving my child a pacifier. I didn’t really have any good reason, other than disliking the look of them, but still, I’d decided: my child would not have some silicone dummy stuck to her face.

That noble intention was revised about 24 hours after Wonderbaby arrived. I wish that I could say that it was because the lactation consultant told us that it would help with her sucking reflex or because the nurse said that soothers were understood to reduce the risk of SIDS – and they did indeed say these things, which I later dutifully repeated to anyone who looked at me twice when I popped a soother in Wonderbaby’s mouth – but that wouldn’t, strictly speaking, be true. Those statements provided good justifications for the soother, but really? I padded down the hallway of the maternity ward to the tuck shop on the second day of Wonderbaby’s life and bought six soothers to stop the screaming that was becoming the hallmark of any efforts to get her to sleep. To put a cork in it, as it were.

And it worked, brilliantly. For months thereafter Her Bad Father and I would, when rallying our resources to get Wonderbaby to nap or settle down for the night, casually remind each other to cork her. And, thus corked (and soothed and swaddled), she would settle down, and even if she wasn’t so reliable with staying down for those daytime naps, she would always happily suck away for at least six hours of sleep at night. (I, of course, would lay awake all night, reassured by the happy sucking noises, but nonetheless on alert for the moment that a) the sucking stopped, or b) the sucking was replaced by a hungry cry.) 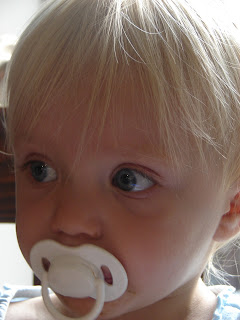 That she loved what came to be called her Soovy was clear early on. Once she was able to crawl, and later walk, she would advance upon unsuspecting children and snatch their pacifiers for herself (she usually imposed a swap – I would say negotiate, but Wonderbaby doesn’t negotiate – grabbing theirs and offering hers in return. Occasionally, if she was lacking a Soovy, she would simply appropriate one from another child, which was cause for much embarassment, but she would always return it when asked and when offered another in its stead. I did, needless to say, keep a stock of soovies with me at all times.) So it was that we were vigilant against the development of too extreme an attachment. We tried to reserve the Soovy for bedtime and naptime (such as it was) and emergencies, and at earliest opportunity we began suggesting to Wonderbaby that Soovy (along with Toadstool, nee Phallic Lovey) be left in bed in the morning and after naps and for a time she was entirely co-operative.

Then she started part-time daycare, and all was lost. It’s a long story, and one that I’m not up to writing about, but Wonderbaby didn’t immediately take to daycare. We went through gut-wrenching morning after gut-wrenching morning of child abandonment as we waited for her to adapt and, as we struggled through that process, it seemed to me too cruel to demand that she – abandoned by her sorry excuse for a mother – should be bereft of her loveys. So she was permitted to keep Soovy and Toadstool with her every morning.

And she has not let go of them since.

They’re like crack to her now, in a way that they never were before. Deprived of them for any amount of time, she will demand to know where they are (Where Toadstool? Where Soovy? SOOVYTOADSTOOL!!!) If we leave them at home, to, say, venture into public without our child clutching an oversized stuffed phallus and chomping on a soother, she will invariably cry and demand that we return home to fetch them (Home. HOME. SOOVYTOADSTOOLHOME!) (we do not, as a matter of course, give in to her demands. But grocery shopping has suddenly become very, very difficult.)

I’m not sure whether to be concerned about this or not. She’s not yet 22 months old, and is, I think, entitled to childish attachments. I don’t want to impose my prejudices and aesthetic judgments on her – I don’t like the look of the Soovy, I don’t like that she’s so attached to it, and I would prefer that she not drag a giant stuffed phallus around with her, but aren’t those my problems? (Problems, not incidentally, that I created myself. I didn’t disdain the Soovy when it helped her suckling reflex and facilitated sleep. And I thought that the phallus – sorry, Toadstool – was funny at first.) There’s plenty of time in our shared future for me to insist that she lose this or that offensive accessory, that she not dare walk our front door with whatever thing attached to her face, that she follow my rules under my roof, etc, etc. She’s not even two years old. Shouldn’t I cut her some slack?

So it is that I’ve decided (unilaterally; Her Bad Father still wants to fight the good fight against all things Soovy) to let it go. She can have her Soovy, for now.

But goddamn if I’m not going to have fun with it: 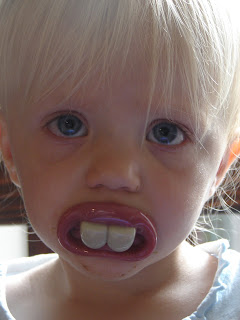