I’ve always loved clothes. When I was very small, and for a very long time after, when I was no longer quite so small, I would spend hours in an attic room in my grandparents’ house, a room that used to be my mother’s, but which came to serve as a repository of all my grandmother’s more glittery treasures: endless boxes of costume jewellry and hats and old dresses and robes and the occasional stray piece of hard candy, invariably scooped up by my little sister for exploratory sucking. My grandmother herself was, to my mind, dazzlingly fashionable, in her red lipstick and her turbans and her wide-cut trousers. She looked like every heroine on every old black-and-white movie that we watched on her ancient television on Sunday afternoons, right down to the scotch-on-the-rocks rattling in the glass in her hand. She loved glamour, my grandmother, and I loved it with her.

When I became to old to play around in her attic of treasures – when, indeed, she died and my grandfather sold the house and got rid of her things, to my eternal dismay – I began assembling my own collection. Goodwill, Salvation Army, Value Village – these became my attics, to be rummaged through for treasure, and rummage I did. By the time I was in my early twenties I had a vast collection of vintage clothing and accessories – snakeskin stilettos from the fifties, an Yves Saint Laurent pea coat from the sixties, ultrasuede Halston from the seventies, polka-dotted Versace from the eighties, and all variety of treasures from across the decades (the perfect faded Flintstones pajama top featuring Pebbles and Bam-Bam: timeless) – that I delighted in and which I dedicated, in secret, to my grandmother.

Treasures from that collection have come and gone, but I still have most of those clothes, tucked away in storage, preserved for…? What? My daughter, perhaps, if such things become of interest to her. Or perhaps just for the sake of collection. I’m a magpie when it comes to clothes – I collect and keep – both because I love clothes for their beauty and because I fear (a hangover from the loss of my grandmother’s treasures, no doubt) missing out on or losing something that should be treasured. I collect and I keep and I never, ever regret. Not for me, in other words, the ministrations of the What Not To Wear fairies – I would love somebody to provide me with a new wardrobe, but not at the cost of the old. Unless by ‘old wardrobe’ we are not referring to my literally old clothes – the ancient Dior, the faded von Furstenberg – but to my new old wardrobe. My mommy wardrobe. And not even the tatty yoga pants and tank tops that are its mainstay – I love my yoga pants. No – what I would happily get rid of is the shoes.

I say that I never regret clothing and footwear choices – not even the Azzedine Alaia knock-offs that I wore in Europe in the early nineties, scandalous bits of fabric that they were, nor the purple Minnie Mouse-style stacked heels that I wore at the same time – but that is not, strictly speaking, true. I sort of regret this: 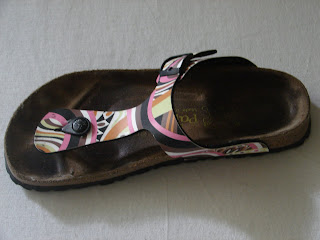 That, my friends, is a Birkenstock. Just one, because the other has been spirited away by a cat, or by the angry ghost of my grandmother, who would have recoiled at such hideousness. But it is, still, my Birkenstock. A Papillon Birkenstock (oh, the irony, such a cloddish shoe named for a butterfly!), and one with a sort of Pucci-esque print, but still. A Birkenstock.

It was, in my defense, purchased in the later stages of my pregnancy, when my back was aching and my knees buckling and my feet swelling beyond recognition. It was hot, I was heavy, and ballerina flats were no longer keeping me aloft. I needed serious orthopedic mojo, and the Birkenstock sandal came highly recommended. And it certainly lived up to its reputation: once my feet were comfortably established in the smooth curves of its sole, the Birk carried me gently, firmly, through the hours and hours of walking that were keeping me sane in the last, interminable, months of pregnancy.

But: they were nevertheless Birkenstocks, and they were ugly, and I knew to be grateful for not being able to see past the vast expanse of my belly to my feet below, which I knew were splayed out beneath me like great flat hippie pancakes garnished with a slash of raspberry jam.

I don’t know that I would do it differently, if I had it to do over again. Those hideous foot-swaddlers saved my back. But for a wannabe-Holly-Golightly girl who had grown up – on the Pacific Northwest, surrounded by fleece and hemp-shirts and Birks, Birks, as far as the eye could see – swearing to never, ever let so much as her manicured pinky-toe touch the edge of such a monstrosity, the fact of having succumbed to the siren-call of comfort and crashed upon the rocks of orthopedic footwear is difficult to bear. I have worn Birkenstocks. I have worn Birkenstocks more than once. I may well – if another pregnancy is in the offing – wear Birkenstocks again.

God – or Nina Garcia – help me. And, Grandma? Forgive me.

(This is part of PBN’s ‘Little Black Book Of Style’ Blog Blast. You have until midnight tonight to join in, too.)

(Also, for those of you following the Soovy discussion – to Binky or not to Binky? – there’s been a vote for ‘only bad mothers give non-infants binkies’ in the comments here. Maybe Wonderbaby is going to fulfill the promise of her BillyBob Binky…)