I’ve always liked fall. I’ve always associated fall – even more than spring – with newness: the smell of new erasers, new pencils, new books, the deliciously crisp whiteness of the pages of a brand new notebook. So I’ve never minded when summer draws to its inevitable close. More than that – I usually feel a prickly impatience throughout the last days of August, an urge to get on with it, to move forward into the crisp, clear days of September, to pull on sweaters and crack the spines of new books and start a whole new year.

Except for this year. This year, we did something new, something summer-new, in the month that I most associate with the passage of time. This year, we took a holiday in late August. A camping holiday. We went outdoors – sort of outdoors, anyway, in our rented RV – and set Wonderbaby loose in the wilderness that is the network of provincial and state campgrounds of Southern Ontario and upper New York State. And it was just so wonderfully disruptive of what I’ve come to understand, in my adulthood, as summer fun – so wonderfully disruptive of August, a month that is usually spent sipping cold drinks on hot patios and plotting for September – that any and all notion of calendrical time was, for me, utterly destroyed.

It was disruptive, in part, because it was uncomfortable. It was uncomfortable because – for all the declarations of my husband’s extended family, from the mouths of their rain-soaked tents, that our accomodations seemed the height of luxury – it was spent in a rolling tin shack that had been decorated in 1991 and so bore all the hallmarks of suburban recreational luxury as defined in the late eighties. It was cramped, and the seating and bedding were uncomfortable, and we were surrounded by navy blue and burgundy and taupe and the occasional accent of wood panelling or gold-look plastic trim. It was ugly, and once a few days worth of sand and one thunderstorm’s share of mud had been tracked in and the shower stall had been filled with wet towels and dirty laundry and a few flies had taken up residence, it bore more than a passing resemblance to somebody’s grandma’s dank suburban basement.

What was more disruptive, however, was the entirely discomfiting experience of loving the discomfort. And not just loving the experience for its novelty – the appeal of the camping trip is, after all, the novelty of casting aside immediate home comforts and attempting to fashion something approximating a home in a hostile environment, to mediate ordinary comforts with the extraordinary materials at hand by wood or stream, to make cushions of pine needles and dining tables of fallen trees – but loving it for its familiarity. Her Bad Father and I have camped in tents and portaged canoes and kept warm by campfires many a time, in our shared past, but we have never sallied forth into the wild in a motorhome, never faced the elements from a padded bourgeois bunker, protected from severe discomforts by a thick layer of upholstery and wood panelling and the security of a Porta-Potty.

I, however, spent nearly every summer of my childhood travelling the western provinces of Canada and the Pacific Northwest and – one year – the California coast all the way to Disneyland, in campers and camper-vans and tent-trailers and mini-motorhomes. There was, occasionally, some tenting, but on the whole my parents preferred the relative comforts – the padded seating, the propane stove, the Porta-Potty, the roof over our heads – afforded by recreational vehicles. And so it was that my sister and I spent a significant portion of our childhoods in the outdoors, albeit an ‘outdoors’ mediated by certain middle-class rituals and comforts that our homes-on-wheels allowed us to carry with us into the wild.
As a child, I loved these holidays, these summers spent exploring, our comfort allowing us to venture forth securely and imagine ourselves to be adventurers, pioneers. But as an adult, I regarded the memory of these trips with a mildly affectionate disdain – 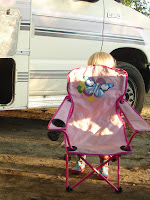 ah, such innocent fun, but such bourgeois misunderstanding of what constitutes NATURE and WILDERNESS. So middle-class, so limited, so inauthentic. Why – I would demand, rhetorically, of my young and sympathetic husband – do people even bother pretending to venture out of doors, if they insist upon dragging civilization with them? So typical of we westerners, we coddled inhabitants of the developed world, I thought, to play at exploring “nature,” to pretend to cross the boundaries of civilized life and experience the “outdoors.” Bah, I thought. I would never do that. My children would camp in tents in the backcountry, making fires from flint and foraging for berries.
I thought about this on the last night of our adventure, as my husband and I sat outside in the dark dark night, listening to crickets and watching the last flickers of a dying campfire. Earlier that evening, I had walked with Wonderbaby, down the road, toward the lake, out from under the canopy of trees, to watch the moon rise. There, I had said, pointing at the rising moon. There is the moon. Wonderbaby regarded it critically, and then said, button. Moon. Button! I laughed in the moment, at her comparison. But later, thinking about it, it saddened me, just a little: for her, the round, glowing moon was very much like the luminescent circles that are spread across the stereo control panel, or on the touchpad of the cordless phone, or vertically stacked in the elevator. Those buttons do not, for her, glow like so many tiny moons – the moon glows like those buttons. And so, I imagine, would stars glimmer like streetlights and thunder rumble like an approaching subway train and geese honk like so many Hondas stuck in traffic. She is just 21 months old, and the markers of civilization are already her point of reference for understanding nature.

So it was that, after tucking her in, in a proper bed, and shutting a proper door against the cool, mosquito-ridden night, I could see what my parents were up to. Our (more or less) comfortable excursions into the wilderness of provincial and state campgrounds (and sometimes beyond these, into the true wild of forestry campsites) in our camper-van or tent-trailer allowed us to travel outside the conventional boundaries of our civilized lives for meaningful stretches of time. We couldn’t have spent weeks at a time living in tents – we wouldn’t have wanted to. But limiting our adventures to a night here and a night there – the amount of time manageable with small children in a tent – would have kept our adventures in the realm of novelty. Our protracted excursions away from home, in these portable cottages, on the other hand, allowed us something of the experience of living outside the boundaries of our civilized lives. Of living outside, in a manner accessible to a civilization-dependent family with small children. Of demonstrating to ourselves that ‘the outside’ (as Wonderbaby now refers to it – we in OUTSIDE. Be in OUTSIDE. WE IN OUTSIDE!) is something that we can be in, that can surround us, that we can be part of, even as we cleave to civilization at the same time.
Wood panelling and burgundy upholstery don’t dim the moon or dull the crickets, when you are, really and truly, outside. And the cool of fresh air and the smell of pine fall upon the senses in exactly the same way whether you are standing outside a tent or a tent-trailer. In any case, Wonderbaby would not have spent nearly two weeks ‘in the outside’ if we’d only had a tent to sustain us. 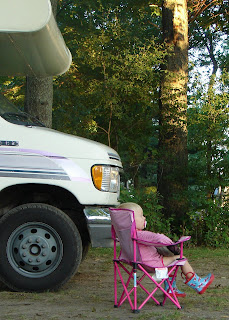 I’m sorry that it’s over. I wish that we could have prolonged this trip, this August, this summer, interminably. We’ll be doing it again.
*********
More in the category of things that I swore I’d never enjoy as an adult – virtual disco karaoke. Yeah, you heard me. Never say never.
Share
0
Share
0
Share
0
Share
0
Previous post
Storm
Next post
Deliverance