by Catherine
Uncategorized
Share
Edited below; more information.
I don’t exercise. Never have, really. Oh, I’ve tried, but I just can’t get into it: gyms are smelly, and yoga bores me. This is not to say that I have never engaged in anything fitness-y, just that I need to have better reasons than fitness. I like my bicycle because it gets me places. I love horseback riding because I love horses and I love the discipline of riding and I love (or loved – this should actually be past tense, because I haven’t been on a horse since becoming pregnant) being able to escape the noise and haste of the city for the lovely stink of the barn. I studied ballet for years, just to prove to my mother that I wasn’t hopelessly graceless (I failed, miserably, but can nonetheless do a posture-perfect plie. Just don’t ask me to actually dance. I will step on you, and hurt you, and myself, and anyone within ten feet.)

And, from time to time, I’ve run. Not, again, for the sake of fitness – as I said, I’ve never been much fussed about fitness for fitness’s sake, and really don’t see anything wrong in not having rock-hard abs – but for a variety of other reasons. Clearing my head, for one – I’ve always found running to be a most effective head-clearer. Dealing with grief, for another.

When my nephew Tanner was diagnosed with a terminal, degenerative illness a few years back, I found that the only way that I could shake the foggy hangover that attends hours of crying and pressing of fists into eye sockets was to just head out my door and run. Run, run, run; pounding my feet into the pavement, pushing myself to round the next corner, to race up the next set of steps, to keep going, keep going, keep going until my lungs were fit to burst. And then I would stop, and stretch, and rub my sore muscles, and revel in the ache and tell myself that I should ache, that the aching is a privilege, that Tanner’s muscles would only ever ache from the exertion of living and, later, from the exertion of dying. And then I would get up the next morning, muscles aching and eyes rubbed sore, and do it all again.

I ran until winter came that year, and then stopped, balking at the snow and the frost. Before I had a chance to force myself out into the cold, I got pregnant. Thus ended my running. I found other ways to deal with the grief, and, later, with the joys and fears of motherhood and the general messiness of a life lived with love. I found writing.

My sister, Tanner’s mom, never did stop running. It wasn’t something that she and I talked about very often, but she was running, too. Faster, and further. Her grief was far more difficult than mine to escape, and so she ran and ran for miles, her sadness and her fear nipping at her heels, her dream of hope or, at least, solace, glimmering in the distance. She ran and she ran and she’s still running. She’s run hundreds and hundreds – maybe thousands – of miles now. Marathons, many times over.

She’s coming to my city at the end of this month, to run. It’s my deep, deep regret that I cannot run by her side. She’s running a marathon. She’s running it fast. It – and she – are beyond me. I haven’t run in nearly three years, except when chasing Wonderbaby. (And she never goes 26 plus miles. At least, not yet.) So I can’t run with my sister. I wish that I could, but I can’t.

But I can walk. And I can write. So I’ve decided to combine the two, and throw in a little bit of mad cheering.

Her Bad Sister is running in Toronto’s Waterfront Marathon on Sunday, September 30th. I’m going to do the 5k Charity Challenge Wussy Walk, which is an adjunct to the marathon, as a show of support to her, and to raise money for muscular dystrophy. And I’m going to do it all in Tanner’s name. It’ll be Tanner’s Walk, and I’d love for anybody who is in the Toronto area to join me. (Seriously. You don’t have to know me. You just have to be willing to sign up and walk with me and cheer for Tanner and his mom. I’d love it if you would. E-mail me or leave a comment here and I’ll get in touch with details. The more the merrier!)

And if you don’t live close enough to come walk, you could pledge me. Money raised will go directly to Muscular Dystrophy Canada, in Tanner’s name.

And, finally, you could spread the word, send people back here to hear this story, encourage them to walk or pledge or just send cheers and good wishes. That would be wonderful, too. (Let me know if you do. I’ll want to thank you.) 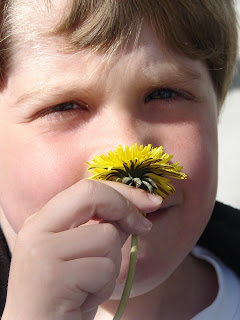 Tanner. Whose heart is stronger than his muscles give it credit for.

It would be wonderful for me, and for my sister, and most especially, for Tanner. And if you get a little fitness inspiration out of it, well – that’s a good thing, right?

(If you want actual fitness inspiration, check out PBN’s ‘How Do You Fit In?’ Blog Blast, or take part – you could win a pair of Ryka running shoes. Help you run marathons. Or walk them.)

Edit: all of you awesome, awesome people making pledges… if you’re having difficulty, as some of have reported, either just keep trying with the pledge link HERE (it seems to sort itself out), or go HERE and find the button that says “Put A Pledge on Your Favourite Runner Or Walker” – ahem, ME – and click through and search my name (Catherine Connors.) Voila!

Those of you who have said that you’ll walk with me (WOO HOO!) I’ll be in touch by e-mail in a day or two to pass on details.

You all rock. I heart you.