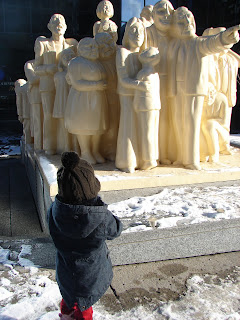 Here’s something that I feel strongly about: the right of parents to take their children pretty much anywhere in the public sphere that they see fit. I also feel strongly that this is a right that carries with it considerable responsibility – as do most rights – but there it is: I believe that if a parent needs or wants to take their children to the theater, to nice hotels, to restaurants that don’t use vinyl tablecloths or distribute crayons with their menus, that’s their right. Any perceived right by other members of the public to move about in public without exposure to children is just that: perceived. There can be no such right in a liberal human society, because children are members of such societies. They are not pets – a comparison that I once saw in a letter to the editor of a newspaper – they are people. Little ones, and ones that sometimes wear diapers and are prone to outbursts, but still. Those descriptions fit many members of our society who we don’t leash up outside of cafes and put in the baggage hold of airplanes.

So there. If I want to dine four-star with my two-year old, I will.

I said that I believe that this right comes with responsibility. It does. My right – and my child’s right – to eat at a public establishment of my choice is limited by responsibility to ensure that my child does not wreak havoc in that public space (just as it is my responsibilty, with myself, to not become drunk and disorderly in public spaces. And yes, toddlers can sometimes behave like very small, drunk and disorderly vagrants. We know this.) So I’m not claiming some right to be able to eat at Balthazar during the 8pm rush with a shrieking pre-schooler. I am claiming that I should be able to do so under reasonable circumstances, i.e. if and when I have some reasonable expectation of my child’s decent behaviour and am willing to adapt and/or retreat if things begin to go badly.

I’ve been lucky, in that I’ve rarely confronted what a close friend once called ‘child-haters’ in public; you know, the people who give you the stink-eye when you push your stroller into a cafe or buckle your child into the airplane seat next to theirs (though I once endured the latter for the duration of a 45 minute flight, my heart breaking as Wonderbaby endeavoured gamefully to catch the eye of the evil bitch sitting – stiff and miserable and plainly hostile – next to us, refusing to return Wonderbaby’s smiles.) And I didn’t really encounter any hostility during our recent trip to Montreal – a city that is, in parts, decidedly child-unfriendly, notwithstanding its candy-distributing elderly and shops full of cute sock-monkey hats. Not really.

It was at breakfast, at the continental breakfast served, gratis, to hotel guests in the Hotel le Germain’s fine dining establishment. Wonderbaby and I were such guests, and we were determined to avail ourselves of the pain du chocolate and crepes and espresso drinks on offer. I knew, given the style of the hotel – this a hotel so hip that I mistook the bellhops, trendily scruffy and clad in black and leather, for members of my husband’s TV production crew – that we would encounter a dirty look or two from disgruntled patrons expecting to have their peaceful breakfast ruined by a manic toddler. But I didn’t care. Wonderbaby and I had every right to our breakfast, and were determined to have it. And I had every expectation of Wonderbaby’s good behaviour: she loves restaurants, and cafes, and is usually so pleased to be ‘having coffee like Mommy’ that she can be expected to sit, working, very seriously, a tiny espresso cup full of milk and a cookie or croissant, for extraordinary lengths of time.

But my confidence in her good behaviour did not change the fact that what the hostess saw, when we walked in the restaurant, was a three-foot tall potential menace, clutching a soft, odd-shaped lovey.

She was unflaggingly polite, I’ll give her that. But the fear coming off of her was palpable. Was this creature going to hurl croissant everywhere? Would it emit loud noises and pour milk on the floor? Did she, the hostess, have time to put away all the china before the creature moved into the room? I half-expected her to ask whether we wouldn’t prefer to eat in our room. And the truth of it was, I was so thrown by the look of panic on her face, felt so badly for her obvious terror, that had she indeed asked us that question, I very probably would have retreated. I recovered quickly enough, though, and took charge of getting ourselves seated and escorting Wonderbaby to the spread of food to select something more substantive and healthy than the pats of butter that she had expressed interest in having for breakfast, with a side of milk and sugar cubes. And as I did, I got angry. and frustrated, because the hostess’s fear had made me feel ashamed in way that no child-hater’s hostility ever could. I could feel her wide, worried eyes on our backs as we toted our latte and milk and croissant – Wonderbaby carrying the spoons – back to our table, and felt self-conscious in a way that I almost never, ever do with Wonderbaby. I could feel the weight of her expectation that some disaster was imminent; I could feel it outweighing my expectation that the worst that could happen was a little spilled milk, and was keenly and shamefully aware that her definition of disaster might very well include spilled milk.

I wanted to feel angry, but I was having trouble faulting her. She was, after all, remaining polite and helpful and as superficially welcoming as she could be under the circumstances. I can’t demand that someone be happy and comfortable in the presence of a toddler, any more than I could demand that others be happy and comfortable in the presence of any person who is different – less attractive, less able, less youthful – from themselves. I might wish it were so – I do wish it were so, in that optimistic, eutopian corner of my heart – but I can’t make anyone feel differently than they do. All that I can expect is that is they behave tolerantly. And on that front, she was impeccable. It was just, you know, the fear in her eyes.

How can one get angry about the look in someone’s eyes?

That experience stayed with me for the rest of the trip – even after a few more breakfasts in the dining room with charming waitstaff who cooed over Wonderbaby and who held not the slightest trace of fear in their eyes when she insisted upon carrying her own plate of croissant to the table. It stayed with me as we explored the city, causing me to hesitate in the doorways of art galleries and to avoid entering the swankier boutiques. And I hated that. I hated that I had absorbed some of that young woman’s fear, some of the belief that children can be fearsome (they can, of course. But only their parents truly understand the parameters of this fear, and know that whatever fear they can inspire should have very little bearing on the carrying forward of our lives and life in general, including life in nice shops and restaurants.) I hated that I was feeling – if only a very little bit – ashamed of my insistence upon bringing my toddler everywhere with me.

Wonderbaby can be a handful – she can be an army of handfuls – but she is, to put it politically incorrectly, a good girl. Not all children are this, I understand, but I choose to believe that most are. And I choose to believe that most parents are skilled at managing their children, and prudent enough to make wise decisions about how and when to escort them in the public spaces that – here’s the political philosopher in me – they need to participate in if they are to grow up with the social skills that underline good citizenship. They can’t learn how to behave in public – how to be meaningfully and positively social – if they are confined to daycares and playcentres and the company of other children exclusively. They need to spend time in the public sphere – in as many corners of it as possible – if they are to learn how to flourish there. 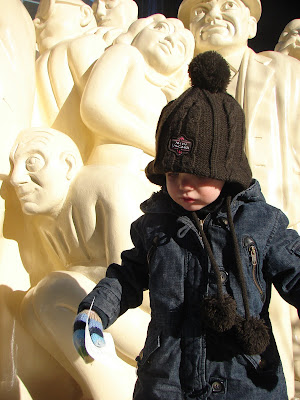 And, I suppose, they need to learn how to cope with the fears and intolerances of others. Wonderbaby seems to be doing better on this count than I am.

(Apropos of absolutely nothing that I’ve said here, except for, maybe issues concerning justice and mealtimes: have you seen what we’re up to over at the League of Maternal Justice this week? It’s meaty. Check it out.)