They’re Real, And They’re Not All That Spectacular

My boobs? Are gargantuan.

Which means, sadly, that my enjoyment of them is limited. Gigantic boobs are highly over-rated, if you ask me, and all the more so if they are both gigantic and itchy. They cause back pain, and skin discomfort, and I’ll be damned if I can find a bra in which to cram these things that both a) contains them properly, and b) doesn’t exascerbate the itchiness with crap like underwire (a torture device if there ever was one) or elastic or lace or, well, anything that presses against the skin. Which leaves one with giant cotton nursing bras, which, you know, don’t exactly make one feel sex-AY.

(My ass? Also massive. But it is one of the very great mercies of Mother Nature and whatever gods are responsible for buttocks that the ass is located on one’s back side. Where one cannot see it, unless one contorts oneself in front of a mirror, which one is not inclined to do when one has ballooned to the size of a baby whale. So, no, I do not spend a great deal of time reflecting upon the size of my ass. I just pretend that it’s not there. ANYWAY.) 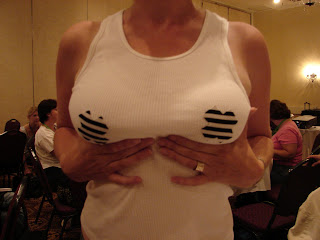 Remember these? NOT AS BIG AS THE NEW ONES, oh my hell.

The first time around the pregnancy and nursing block, the massive tits were a novelty. Oooh, look at these! A novelty that wore off as soon as there was a nipple-chomping infant latched to them, but still: there was a period of time, albeit short, during which I thought that they were pretty awesome. This, of course, was also a time during which I clung to the belief that they would just, you know, stay that way permanently, or that if they weren’t destined to remain in a state of partum robustness, that they would just bounce right back to their regular perky 34B selves. This was a belief that was, of course, shattered not long after Wonderbaby weaned – and one that shattered devastatingly – but it was nice while it lasted. This time, I don’t have the luxury of regarding my boobies through rose-coloured glasses: I note their massiveness and am immediately confronted by the fact that they will deflate. And that, I am sure, will not be pretty.

So: big, itchy and doomed to a tube-sock future. This sucks. What’s a vain and uncomfortable pregnant woman to do?

Seriously: anyone got any good leads on pregnancy-safe boob moisturizers? Jumbo-sized bras without scratchy bits that aren’t too ugly? Space-age titty technology that lifts and separates and restores mammary beauty? Anyone, anyone? PLEASE?

Help me. I pay in chocolate.