Evil Mom-Blogger Haters Sent Me Into Labor. Sort Of.

False labor. What the hell is up with that, seriously? It’s, like, the meanest trick that the gods have up their sleeves – save, say, giving a pregnant woman who is racked by both anxiety and extreme morning sickness walking pneumonia and her toddler an eye infection two days before they move house. Maybe.

False labor is worse than that. It’s worse because not only is it physically painful – the contractions feel pretty damn close to the real thing, which, you know, is not good – it is out-and-out psychological torture. You never know when they’re going to hit, and when they do, you don’t know whether it’s the real thing or not until they begin to subside. So it’s this recurring experience of

It’s even better when it happens, like, six times in the middle of the night while your legs and feet are cramping themselves into something approximating badly contorted crab claws. And what’s even more awesome? My doctor tells me that although the false contractions (which, she says, could be caused by stress. HA) might signal an early labor, they might also continue for some weeks! Which: GREAT. Shoot me now.

So I’m exhausted. Mentally and physically exhausted and pretty desperately in need of a very dry double vodka martini and maybe a flock of scantily-clad manservants to hand-feed me the olives while I slurp the liquor. Because, you know, that’d help a bit.

But seeing as that’s probably not forthcoming, maybe I’ll just go crawl back under the covers and not sleep for a few more hours. 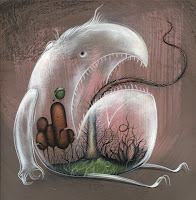 HBM (aka CNEZPMB): Portrait Of A Woman Nine Months Plus Pregnant and Hating It.
(Seriously.)
*******

If I had more mental energy, I’d be participating in this week’s Friday Flashback party, for which the topic is, First or Most Memorable Early Movie Memory: Discuss. I’d have something to say about having been terrified by Darby O’Gill and the Little People, or about being forbidden by my parents from seeing Grease, two experiences that scarred me for life. Travels into the darker reaches of my childhood memory, however, just might bring on more contractions, though, so, yeah, not up for it. Feel free to jump in yourself, though. (See an example at OTJ, who brings up Escape From Witch Mountain, which, omg, SEMINAL WORK OF CINEMATIC ART AIMED AT FANTASIST CHILDREN.)

(Also, if you’re feeling all participatory and Earth-friendly today, you might go do this, too)