A Portrait Of A Mother As Hero 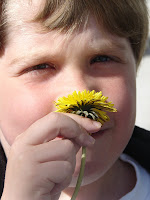 Something – someone – that I haven’t written about it in a long time: my nephew, Tanner. He’s dying. He has an aggressive form of muscular dystrophy – Duchenne’s muscular dystrophy – and it’s become painfully clear over the past few months that his is a more aggressive form of an already aggressive terminal disorder, which is why I haven’t written about it in so long. It’s too painful. He can no longer walk, at all. The muscles in his legs have deteriorated to the point where they are no longer able to carry him forward. His lungs and his heart are going to fail him in this way, too, but there’s no wheelchair for the lungs or the heart.

He’s only eight years old. This is all happening much too quickly. For us, for him.

His mother is my sister, my only sibling. If you’d asked me, say, twenty years ago whether I’d admire her as grown-up, I would have stuck out my tongue at you and called you stupid. I would have said no, because she’s a stupid stupid-head and she took my favorite top and she’s going to be a stupid-head forever. Or something like that. We loved each other, but we rolled like that.

My sister, formerly-known-as-stupid-head, is now the mother of three children, one of which a dying child, and I don’t know how she does it. Like, head-shaking, utterly-baffled, completely-beyond-me, oh-GOD-pass-me-another-drink don’t know how she does it. I don’t think that she knows, either. But she does it, somehow. She keeps on doing it, because it’s the only choice she has. She can’t give up. She has to keep going, for Tanner and his brother and his sister, and for herself.

She runs because Tanner can’t. She runs because he’s running out of time, and because, in the face of being able to doing nothing to stop or slow the passage of that time, it helps, a little, to run headlong into the wind and speed through time and make time her bitch, if only for the hours and minutes it takes to run a marathon. To feel her own legs weaken and her own heart and lungs strain to bursting in their confrontation with time and speed and the inexorable spinning of the world toward destinies she has not chosen.

And that persistence, that determination, against all odds – whether it’s expressed in running or writing or just hanging-on-by-the-fingernails coping – that’s motherhood at its most heroic. That’s heart.

My sister, finishing the Boston Marathon this week. A portrait (in miniature) of awesomeness.

I’m closing comments for this post because a) my heart is a little raw after writing it and I’d like to just let it sit for a while, b) because I’d rather you take that extra second to click over here or here and learn a little about MD, or maybe, if you’re so inclined, make a donation.

(Posted as part of